A Spying Eye: A Henrietta and Inspector Howard Novel by Michelle Cox 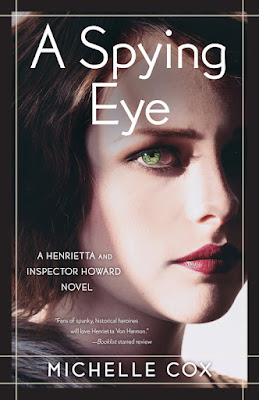 In A Spying Eye, Clive and Henrietta return to Europe in an attempt to resurrect their failed honeymoon. While in London, they are approached by their old friend, Inspector John Hartle, who convinces them to search for the missing panel of the Ghent Altarpiece, a famous Renaissance painting, of which Hitler’s top men are also in pursuit.

Meanwhile, back in Chicago, Oldrich Exley threatens to cut off financial support for the entire Von Harmon brood if Elsie continues with her plan to marry Gunther―a situation made worse by the sudden appearance of one Heinrich Meyer, who claims to be little Anna’s father and threatens to take her away. Desperate, Elsie seeks the help of Clive’s sister, Julia, who is herself the victim of domestic abuse and who has fallen under the spell of a handsome Texas millionaire bent on acquiring a rare painting from the Howard collection.

​Clive and Henrietta’s search takes them to Chateau du Freudeneck in Strasbourg, France―the ancient seat of the Von Harmons and home to three eccentric distant relatives. What begins as a wild goose chase turns decidedly more deadly when several Nazi officers also arrive at the chateau in search of a “valuable item.” When Henrietta and Clive attempt to flee after Henrietta uncovers a shocking truth, they are forced to trust themselves to a suspicious French servant who seems all-too willing to help . . .
Review -

This is the sixth book I have read in the Henrietta and Inspector Howard series and I enjoyed it every bit as much as the previous five.  I love strong women characters that defy the expected roles and Henrietta is every bit that.  I also love the period these murder mysteries are set in. The author does a wonderful job of making the era come alive, the icing on the cake.
Henrietta and Howard are off to Europe again for a re-do of their honeymoon that was previously side tracked by intrigue.  Will it be a joyous romp this time - not a chance.  When his mother finds what might be some distinguished relatives of Henrietta's and demands they make a visit, they are drawn into the eye of the storm. It all centers around a missing art panel Hitler is looking for.
At the same time the author keeps drawing us back to North America to follow the intrigues going on with other family members from Henrietta's sister Elsie, who has fallen in love with a janitor at the private school she attends, to the appearance of a rich Texan at the ancestral home where he pushes to buy a painting that they don't want to sell. Does he have a hidden agenda?
This split plot sounds complicated, but Cox does a great job of moving between the two and keeping the reader glued to the pages. Another great novel. Can't wait for the next. 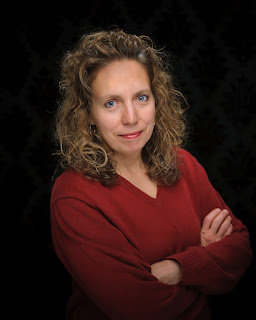 Michelle Cox is the author of the Henrietta and Inspector Howard series as well as “Novel Notes of Local Lore,” a weekly blog dedicated to Chicago’s forgotten residents. Her books have won over 50 international awards and have been praised by Kirkus, Library Journal, Publishers Weekly, Booklist, Foreword, Elle, Redbook, Brit&Co., POPSUGAR, Buzzfeed, and many others.

Unbeknownst to most, Michelle hoards board games she doesn’t have time to play and is, not surprisingly, addicted to period dramas and big band music. Also marmalade. She lives in Chicago with her husband, three children, and one naughty Goldendoodle and is hard at work on her latest novel.