On Writing: A Memoir of the Craft by Stephen King

on November 14, 2022
One of Time Magazine's top 100 nonfiction books of all time.
Synopsis -
Immensely helpful and illuminating to any aspiring writer, this special edition of Stephen King’s critically lauded, million-copy bestseller shares the experiences, habits, and convictions that have shaped him and his work.

“Long live the King” hailed Entertainment Weekly upon publication of Stephen King’s On Writing. Part memoir, part master class by one of the bestselling authors of all time, this superb volume is a revealing and practical view of the writer’s craft, comprising the basic tools of the trade every writer must have. King’s advice is grounded in his vivid memories from childhood through his emergence as a writer, from his struggling early career to his widely reported, near-fatal accident in 1999—and how the inextricable link between writing and living spurred his recovery. Brilliantly structured, friendly and inspiring, On Writing will empower and entertain everyone who reads it—fans, writers, and anyone who loves a great story well told.

On Writing by Stephen King is, like the author, unique. It isn't a traditional book of instruction on how to write. Instead it is part memoir, part how-to and, as King shares near the end, a permission slip to write for those who need it. I love his words, “... you can, you should and if you're brave enough to start, you will. “ Amen.

I am a huge fan of memoirs, so having King's story woven throughout added a welcome dimension. In between these personal revelations, ideas are being offered – concepts surrounding characters, settings and dialogue. He describes what works best for him and what elements he feels helps draw a reader into a story, but he never implies we have to do it his way. You can sense how much he loves writing and the hard work it demands. He follows his instincts, creates the kind of stories he loves to read, and he is always on alert for the next “what if” idea to arrive.

On Writing is also full of hard truths. Being an author isn't an easy road, but for King it's all worth it. He shares,  “When you find something at which you are talented, you do it (whatever IT is) until your fingers bleed or your eyes are ready to fall out of your head.” As someone who has been writing for 15 years, I can attest to the truth of this.

More than anything, what I took away from this how-to and memoir is that King's writing comes from a place of passion and hard work. He embraces both fully, which is why he is such a prolific author. Why chose to write?  “Writing is magic, as much the water of life, as any other creative art. The water is free so drink. Drink and be filled up.”
Buy the book: Amazon.com ~ Amazon.ca 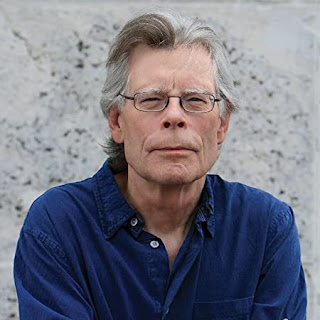 Stephen King is the author of more than fifty books, all of them worldwide bestsellers. His first crime thriller featuring Bill Hodges, MR MERCEDES, won the Edgar Award for best novel and was shortlisted for the CWA Gold Dagger Award. Both MR MERCEDES and END OF WATCH received the Goodreads Choice Award for the Best Mystery and Thriller of 2014 and 2016 respectively.

King co-wrote the bestselling novel Sleeping Beauties with his son Owen King, and many of King's books have been turned into celebrated films and television series including The Shawshank Redemption, Gerald's Game and It.

King was the recipient of America's prestigious 2014 National Medal of Arts and the 2003 National Book Foundation Medal for distinguished contribution to American Letters. In 2007 he also won the Grand Master Award from the Mystery Writers of America. He lives with his wife Tabitha King in Maine.
Connect with the author: Website
author bestseller book bookreview books craft howto masterclass memoir nonfiction onwriting review stephenking writing