on March 19, 2011
When my kids were young, I tended to purchase a lot of the frozen prepared meats from Costco.  From flash frozen fish, to meatballs, to crab cakes, to hamburger patties, to chicken breasts or wings - they were great time savers.  I had a hands down favourite that unfortunately disappeared off the shelf after only a year - Chili Lime Chicken Wings. They were the absolute best when cooked on the BBQ, but in a pinch I baked them.  I even bravely took them to a party hosted by someone who owned a really high-end restaurant and was floored when they asked for my recipe.  They in turn were floored when I told them they were a frozen item at Costco.

Why they disappeared from the store after only a year I have no idea, but I never found a comparable substitute.  This week I decided to be brave and start hunting for ideas how to make this tasty treat. I was pulling together a last minute surprise birthday dinner for my son and had to deliver to his improv group rehearsal.  I needed something both easy to transport and easy to eat.  The recipe below,  from www.outdoor-cooking.com, is one I attempted and it came pretty close. I have since made it a few more times and in time honoured tradition, have altered it slightly. What drew me was the fresh lime juice and jalapenos, plus it was a bit more Hispanic in influence which is more in line with the original wings I purchased.  I have included links to many other wing recipes below.  Most are for Chili Lime Wings - including 1 with more of an Asian influence - but there is one link to 17 wing variations.  I have not tried these others, so attempt them at your own risk.

Some notes on this recipe.  First - I chose a package of just drummettes instead of the the one that has both parts of the wing.   My personal preference as I feel they are easier to eat.  I marinate the chicken pieces in a LARGE Ziploc freezer bag, but it's a tight fit.  If you prefer you can split the meat and marinade between 2 bags.  Carefully press out all the air, zip it shut and then squish the chicken around to evenly mix it with the marinade.  Despite the Cayenne and Jalapenos, they are not very spicy, so be fearless.

The only real pain was the 1 cup of fresh lime juice.  There just is no easy way to do this and it takes a lot of limes.  The taste is 100 percent worth it, though.  I found some limes were dry with very little juice, so look for larger ones and then give them a little squeeze.  They shouldn't feel rock hard.  Lastly, if you can find a package where the chicken wings are already separated into a wing and a drummette, you will save yourself a tedious and messy prep job. 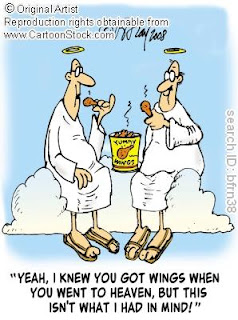 The easiest way to mince the jalapeno and cilantro is in a food processor, but it can be done by hand.  Mix all ingredients except chicken together in a bowl.  If wings are whole, you will need to remove the tip and split them in half (I personally purchase just the drummettes for this recipe.  Marinade for 2-8 hours (the longer you leave in the marinade, the hotter it will be).

1. This was the suggestion in the original recipe I started with.  Grill at medium-high heat.  Turn and baste often with marinade.   Always be sure chicken is thoroughly cooked before serving.

2.  Tried this way recently and found it a lot less work and just as amazing.  Pour the chicken pieces and marinade into a 9 x 13 ceramic dish and bake in a 350 degree oven for 30 minutes uncovered. Heat your grill to medium-high heat. Remove the chicken from the marinade, place on the heated grill and barbecue until brown and crispy.  The advantage here is you KNOW the chicken is thoroughly cooked andyou spend less time standing at the BBQ turning the pieces.  The flavour is just as amazing!

1.  For any true wing aficionado, I found this blog that has recipes for 17 unique styles of wings.  I am going to be trying out a few of these in the near future.  There is something here for everyone!!!  http://www.stilettosetsports.com/17-chicken-wing-recipes-for-the-football-season/

2.  Emeril's recipe - Warning, it's a lot of work as you have to mix up his special herb concoction.  http://www.foodnetwork.com/recipes/emeril-lagasse/chili-lime-fried-chicken-wings-recipe/index.html

3.  From Big Over - this one looks easy, but no cooking instructions. http://www.bigoven.com/recipe/147658/chile-and-lime-chicken-wings

So there you go - something for everyone.  If your mouth is watering, perhaps it`s time to give one of these recipes a try.   Let`s face it - you have 22 to choose from.
bake chicken chili Costco drummette grill jalapeno juice Let's Talk Food lime meatballs recipes wing