"What Could They Be Thinking?" - Tips on Track Courtesy 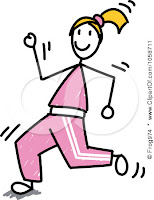 I have so many more important stories to share on my blog, but for some reason this keeps pushing itself to the fore front.  The "What Could They Be Thinking?" part comes after the first 2 paragraphs.

As mentioned in my May 2011 blog, "To Jog or Not to Jog", I have decided to give jogging one last try.  Everyone I know continues to tell me once you get over the hump, the endorphins rock. While I have no intention of doing any distance running, I found a 6 week NOVICE program to train for a 5K.  I stretched this way out to make it really safe for me.  I did Day 1 for 2 weeks. Now I'm doing Day 2 for 2 weeks and so on.  Still waiting for the endorphins promised.  I know, "They're in the mail!"

First a quick update - Day 1 was run 1 minute/walk 1 minute ten times - a total of 20 minutes.  After 2 weeks I still was not great but moved onto Day 2 - run 2 minutes/walk 4 minutes for 30 minutes.  I actually found this a lot more comfortable pace.  I have 1 more week at this before I move onto Day 3.  The one issue I have is that my left calf has a muscle buried on the inside and underneath (not the back) that keeps tightening up.  As a former dancer, there aren't many muscles I can't find a way to stretch, so this has proved annoying.  Fortunately the rest of the body is responding fine.

Now for the "What Could They Be Thinking?" part  - I am really fortunate where I live to have a proper track oval with a rubber surface.  This helps avoid some of the issues that arise from running on concrete. Add in a new pair of quality shoes, good technique and stretching before and after and you have the best recipe for a positive experience.  However, no one mentioned the recreational idiots using the track!

There are 8 lanes on the local track and it is clearly lined and numbered.  The first thing you notice is the direction. The lane numbers are meant to be read one way, the way you are supposed to run.  When you have a large mix of people using the track it is important that we all move the same direction.  The number of times I have experienced people moving the wrong way is amazing.  Hands down my favourite is the people who have their small kids on the EXPENSIVE track on their bikes and let them ride any direction they like - often the wrong way around to meet their parents coming.  Then there are those who use part of the track to get from point A to point B by using the track lanes, again the wrong way.  Another one that surprised me the other day were some sprinters in training.  They would sprint when the lanes were open and they walk back to the start right in the middle lanes where runners were jogging, totally oblivious to the chaos they were creating.  Why not move to the outside lanes at least. 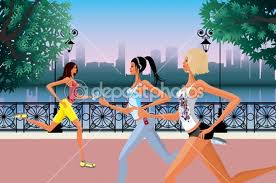 Next is lane usage.  There is a protocol just like on the street.  Of course, just like cars, there are those who don't get it.  Unfortunately, the ones who read this most likely are the ones who already get it - the ones that don't will continue to be oblivious.  Let's start with the inside lanes.  They really are meant to be used by serious runners.  These people might be looking at distance training or timing individual laps, but what they do is move a lot faster for a lot longer than the rest of us.  They shouldn't have to jump around walkers, slow joggers and kids.  I keep seeing recreational walkers out for the evening using this lane for a stroll and it's crazy.  The middle lanes accommodate those who are jogging at a slower pace or power walkers keeping a brisk pace.  Outside lanes are for the evening strollers.  You are there because you are not trying to do anything but have a walk in the fresh air and to be honest, you really don't need a professional quality track to do that.

Another gripe is the oblivious lane changers.  Many times now I'm doing my best to get around the track and a newly arrived walker comes in from the outside and drifts across several lanes until they settle in one.  I'm not a great jogger as it is, and swerving is definitely not my specialty.  I try to give a short "HEY" to warn them, but unfortunately many have on their headphones.  In the same category are the group walkers.  Usually slow, usually older, and happily drifting along spread 2-3 lanes wide; talking, blocking traffic and shifting in front of people unexpectedly.

Last but not least is something that bothers me that doesn't have to do with running.  If you are fortunate enough to have a professional track in your area like the one above, DO NOT walk in hard-soled dress shoes or let your kids use their bikes, skate boards,etc., on it.  It's a privilege paid out of property tax dollars and when mis-used, the cost can be enormous. 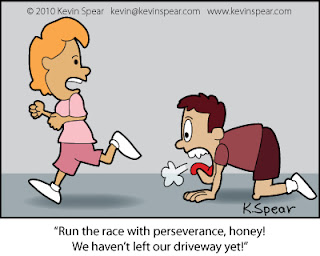 So 2 more runs at Day 2 and then I head into Day 3.  I really hope the endorphins start kicking in soon, but at least I noticed that my last run was finally getting a little more relaxed and my speed was very slightly increased.  That said, I still look like a total novice slowly plodding around the track.  Maybe I just need some cool new running clothes to inspire me!
courtesy endorphins exercise jogging lanes running track