Ivan Sayers - Evidences of the Past

on November 21, 2012
Note - With the content from Fame'd Magazine/Vancouver Fashion eZine no longer available online, I have decided to run a few of my favourite "Behind The Scenes" interviews.  These are people with 20 years or more in the industry.  Welcome to my first on Ivan Sayers.  As the Original Costume Museum Society just changed its name, I have updated the article to reflect this

Fashion collector and historian Ivan Sayers has had a consuming interest in very old objects from a young age. Not only does he love finding and collecting fashion, he loves “reading” the details of construction and then researching to find out how old it is. “For me, I'm always interested in the oldest things I can find – in trying to find something I've never seen before. I'm really interested in the evidences of the past. How did we get where we are now?” One of the founding members of Vancouver's Society for the Museum of Original Costume (SMOC), he lectures on fashion history in design schools, co-curates shows with collector Claus Jahnke and promotes the development of a permanent space for SMOC.

While in his mid-teens, Sayers began a museum in the garage. “I collected stuff from the dump and from thrift stores: toys from the 30's that someone had thrown away, stuff from the old blacksmith shop that had closed down, specimens of agates from rock hunting – curiosities that made you think.” The first dress purchased was a black lace afternoon dress from the 30's he bought for five cents. After examining a new acquisition he would go to the library and try to figure out how old it was. Everything was researched, labeled and organized. When he moved to Vancouver to enter university, he had to sell his collection with the exception of the clothing.

Sayers completed a degree in ClassicalArcheology and then confidently walked into the government jobplacement office only to have the clerk inform him, “'You'll never get a job in this town.' I thought, 'Yippee! I'm 21 years old. I have an education, a huge student debt and the government just told me I'm completely unemployable.'” For a year he survived by scrounging in thrift stores and selling his finds to antique shops. He lived in a house with no heat or hot water and used to sit in the kitchen by the stove with a Victorian shawl wrapped around his shoulders. Sayers remembers, “I was sitting there eating Kraft Dinner which sold for .69 per package with a $300 shawl wrapped around my shoulders. In an odd way I was kind of proud that my priorities were higher than my stomach.”

His life took a new direction in 1970 when Sayers walked into the Vancouver Museum. “I wanted to learn more, so I went to the Vancouver Museum and asked if I could have a look through their costume collection. They said it was impossible as it had been packed away for years, so I offered to unpack and sort it for them. I had an interview and the guy responsible took a dress out of the box and asked me what I thought of it.” Those years spent researching in the library paid off as he was able to pin down the exact year it was made.

Sayers began what turned into a 20-year career by volunteering two days a week. After four months a grant was found to finance his work and four years later he was offered a permanent position. It was a tremendous learning experience, but as he moved up the corporate ladder, he realized it was time to leave. “I had no political aspirations and I didn't want to spend my life at meetings. I loved the garments, I loved doing programs, I loved doing exhibitions and I loved the public.” After touring Europe for a few months, he returned to Vancouver and began to lecture at schools, conventions and societies as well as doing occasional contract work in museums.

SMOC was formed in 1993 with Sayers and Jahnke at the helm. While it initially started as an association of collectors, this changed when they became the recipient of three major collections. The oldest garments currently owned by the society are men's vests from the 1780's. The oldest dress is from 1810 and the oldest children's clothing goes back to about 1800. “The strength of the society's collection is post World War II designers – Dior, Nina Ricci, Balenciaga, etc. Most is prêt-à-porter, but there is some couture.” 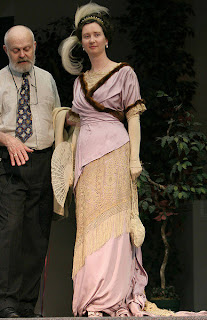 There are several society members with substantial personal collections of which Sayers is one. His two story house is filled from attic to basement with well-organized boxes of period garments and accessories. In the bookshelves are publications going back to the late 1700's. From this wealth of material, he creates interesting presentations for design schools, charity functions and more. In his personal collection, he tries to have multiples from every decade (both good and bad fashion) so that you can see the consistent features.

For Sayers, it really is about finding the oldest garments he can. ““I haven't paid too much attention to modern fashion because that's not what I'm interested in. I'm interested in history and what the clothing tells about that society. Also, it's difficult to really understand modern fashion because you're too close to it. You have to have the perspective of time before you can really analyze it.”

Fall 2011 was the scheduled launch for SMOC's building fund. When realized, Vancouver design students, industry professionals and fashionistas will finally have access to a spectacular rotating collection that will include our own fashionable past. For upcoming shows, to contact Ivan Sayers or to support SMOC  please go to www.smoc.ca.