Can changing your underwear, change the world?

Five eco fashion entrepreneurs are willing to bet on it!!!!! 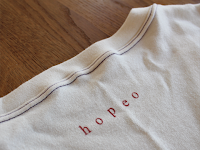 Hopeo was born out of tragedy. Days after the factory collapse in Bangladesh, two friends, Brian Saul and Danielle Rockel decided to start a company that would be the counterpoint to the cheap apparel industry. “I used to buy all the clothes that are made in those unsafe factories. After Bangladesh, it didn't feel right anymore,” says Rockel. “More importantly, I decided to do something about it.” That’s when her and her natural branding guru friend Saul decided to take action. “It started with why we were doing this, and continues to be about why. We believe we can make a difference,” says Saul. “Show the world, there is a better way to treat employees and the planet and still be a profitable and sustainable business.”

With the recent media attention on the true cost of cheap disposable apparel—"The True Cost of a T-shirt" a Globe & Mail front page feature, and the Fifth Estate piece on the factory collapse—Hopeo is gaining momentum. The company just launched a Kickstarter campaign and already have over 30 backers. As well as Rockel and Saul, the team of five includes fashion designer Claire Carreras along with young entrepreneurs Brittany Whitmore and Rhett Ohlsen. The entire team shares the same commitment to providing a clothing alternative that people can feel good about buying.

"Another true cost of cheap disposable t-shirts is the environmental and health
implications of the cotton industry. Cotton is one of largest and most important
global agricultural crops. According to the World Wildlife Fund 2.4% of the world’s
cropland is planted with cotton and yet it accounts for 24% and 11% of the global
sales of insecticide and pesticides, respectively. As the fibre is processed workers
are exposed to these hazardous chemicals, this all before the process of bleaching
and dying which in some cases is equally as hazardous. From field-to-gin-to-spinner
-to-loom-to-production (or micro-clothier), organic cotton offers safer conditions
for workers." 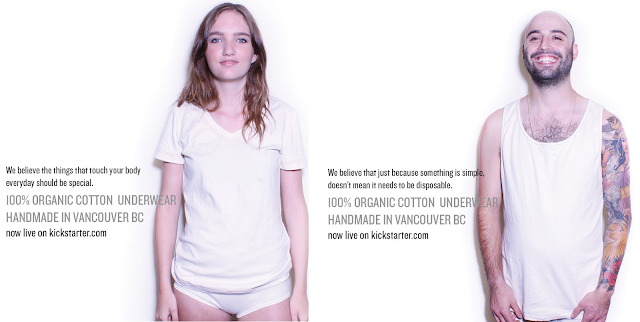 Hopeo makes 100% organic natural cotton underwear handmade in Vancouver, BC. They don't use chemical dyes or bleach and there are no giant logos, just a small henna stamp that washes away over time. All of the organic cotton is grown, milled and processed in North America. The company is employee owned and directed - a micro-clothier, which according to Saul means “all the clothes are designed, made and sold in the same location.” Future plans include opening a Hopeo House in every major city on the west coast. 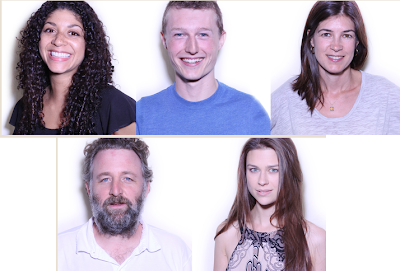 To raise the capital needed to move forward, the company launched a Kickstarter campaign on October 7. Money raised will be used exclusively to finance their first full production run.
“We are driven by the idea that just because something is simple doesn't mean it needs to be disposable,” says Saul, “and we believe that there are plenty of consumers who share these values.”