Interview with Ica Iova, Author of She Never Got To Say Goodbye 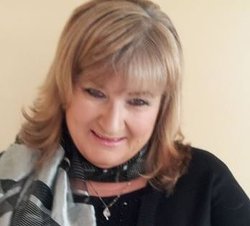 I’d be glad to, Marilyn. My grandparents were great story-tellers, and from a young age, knowingly or unknowingly, they instilled in me the love of story-telling. For years I toyed with the idea of publishing a book, but ultimately I chose the other path and worked for a bi-monthly paycheck. It was not until 2010 that I seriously began considering publishing, but once the idea took root, I realized that it’s writing that sparks my fire. I now have several books under my belt; Boundaries and She Never Got To Say Goodbye are both award-winners, and Resilience has hit Amazon’s top 100 twice. I finally do what I love most, and I don’t see myself stopping anytime soon.

With over ten published books to your name, where do you find inspiration for fresh, new story lines? For the characters you create?

Everywhere. Listening to people and observing my surroundings have become two of my greatest journalistic tools. I’m also blessed with an amazing imagination. Growing up an only child, I often had to rely on my imagination to entertain myself, which in turn, exercised my creative mind. Sometimes, a phrase, an event, or even a single word is all it takes to trigger an entire story.

What was the specific inspiration for She Never Got To Say Goodbye and the main character? What is your personal view on the afterlife?

Let me start with your second question. I believe that death should be neither feared nor desired. Instead, we should enjoy our lives and treat each other with kindness, not for fear of punishment after death, but because kindness and tolerance would create a much better world.


That said, I believe in God. Therefore, I believe in life after death, and not only from a religious angle but from a scientific one as well (although science hasn’t really proved their case of when, and why, monkeys stopped becoming people.) But if you think about it, what are we? According to science, we are a form of energy, just like everything else around us. So, if the other things die but following the laws of energy they come back to life in one form or another, then logically, we can’t be the only “things” where death is the end. From a religious point—and as I mentioned, I prefer to believe in creation, not evolution—I strongly believe that when we die, six feet under is not the end of us. There are so many variations of life after death, and though no one can tell for sure, I believe that our souls continue to live somewhere in the universe. The ultimate judgment—the one that almost every religion talks about—may not even come from God, but from our self-tormented consciences. I think the afterlife is an extension of our lives here on Earth.
To answer your first question, I woke up one morning with the phrase, She Never Got To Say Goodbye, taking tours around my mind. It could’ve been the remains of a dream, it could have been something I’ve heard somewhere, I’m not sure. As the day went by, the same words continued to nag my thoughts. My writer’s instincts kicked in, and soon, a plot began to take shape. I began writing the story, convinced I had a contemporary romantic thriller on my hands. But once I killed my protagonist, I found myself staring at half a story that seemed to go nowhere. I set it aside, as I usually do in these situations, intending to return to it later, when, unexpectedly, I received the terrible news that my father had fallen and had broken his hip.

I had not planned on taking a trip to Europe that year, yet I found myself cramming clothes into a suitcase in a hurry. Packed and downed by a thousand worries, I boarded the first available flight that hauled me all the way to the other side of the continent just before my father passed away. I had so many unanswered questions, and I remember looking at my father’s coffin, wishing I could bring him back, wishing he could give me the tiniest sign that he was okay, wishing God would, at least, tell me why.

Evidently, none of my wishes were fulfilled, but slowly, a twist for my story began to take shape in my mind. For a while, I believed it was a result of the age-old cliché where the characters take matters into their own hands and veer the story in a completely different direction. Maybe it was, but there are times when for half a second I still wonder if it was my own pain over the loss of my father that put the twist in my story. I could not bring my father back, but I had the power to bring Olivia—even if only in the form of a ghost—and help her say goodbye to her baby and find justice for her premature death.

Being organized and consistent works best for me. I do things in the same order every day. Read and respond to my emails, chit-chat with my friends and followers on various platforms for an hour or so while having my coffee, market my books, and only then I start my writing/researching/editing. I don’t focus my energy on pre-marketing. When I start writing a new book, I mention it a few times here and there, and I offer random sneak-peeks, but I don’t hit everyone over the head with it.

How long does it usually take you to go from initial concept to final manuscript?

Usually several months. Once I frame the initial story, I take a break from it and do something completely different—something that has nothing to do with the story. While penning the first draft in an exhilarating state of mind, after a break, I’m able to look at it through a reader’s eye. I’m able to critique my own writing.

My most favorite part is creating the story. Putting it all down. When my mind buzzes with ideas, I can’t seem to type fast enough, to write it all down. Yes, sometimes during rewrites my head may drop on the desk, and I may ask myself aloud, “What the heck was I thinking,” but when that new idea pops in, I feel like a child the night before his first trip to Disneyland. Editing, on the other hand, and I bet I’m not alone in this, feels like a chore. Believe me; there is a good reason why I’m a writer, not an editor.


What would you most like readers to know about you?