The Extraordinary Journey of Vivienne Marshall by Shannon Kirk 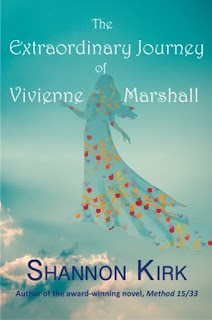 The nature of love, the variety and magic of life,
unending hope, and the importance of saying goodbye
are central to this uplifting tale.

What if you could choose your heaven now? Go on a celestial shopping trip of sorts? Thirty-five-year-old Vivienne does just that, as she lies dying in the ICU; a fatal walk into the path of a truck. In her final week of life, Vivienne treks through the Heavens of a priest, a best friend, a homeless child, and a lover who never was. Vivienne’s guardian angel, Noah, who may just be her soul mate, escorts her through selections of Heavens and through the confusion Vivienne experiences as she flounders between a doubt of life and the certainty of death. Although her visits to varied afterlives provide peace and beauty, choosing proves not so easy: Vivienne’s love for her young son and her earthly father pull her from her colorful journey—and from her divine love of Noah.

The nature of love, the variety and magic of life, unending hope, and the importance of saying goodbye are central to this uplifting tale.

While I am not a religious person, my young years were spent in a very religious environment that taught the traditional view of heaven (and hell).  So it was interesting to embark on reading a story that took a different view of what the term afterlife could be. Interesting.

The lead character - Vivienne - was walking while totally distracted and steps in front of a truck. Lying in the hospital, her consciousness drifts from the earthly domain to heaven.  Tying her to the earth is her desire to be there for her young son and the feelings she still holds for his father who is married to someone else.  Woven into her time awake in the hospital is her male nurse, who tries to hold her there through story telling. The most interesting, the sharing of his own astounding secret.

Then there is Vivienne's time exploring the heavens with Noah, her first love. The goal? To choose the heaven she would like to create when she dies.  What people have chosen and why is intriguing. Vivienne struggles with the question of love here - it is stronger for Noah who was her passion from a young age or her father's son who she came to love later in life.  It's a question that needs an answer before she makes her decision.

Lastly. a separate story line follows her son from the loss of his mother through to old age.  All through a secret is mentioned, one he and his wife have held close since their childhood.  We (and Vivienne) don't learn what that secret is until the very end.

Read a fab behind the scenes interview HERE! 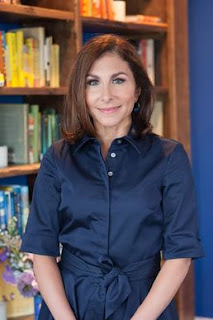 When not writing, she is a practicing lawyer, residing on Massachusetts' Cape Ann with her husband and son and two cat writing accomplices, Marvin Marquez (in honor of Gabriel Garcia Marquez) and Stewie Poe (Edgar Allen Poe).