on March 24, 2017
Thursday at Vancouver Fashion Week the excitement started to build from the moment the doors opened.  Photo taking before and after shows began to reach a fevered pitch as friends old and new wanted to capture the moment. More photographers stepped out of the pit to snap candids.  As soon as you posed for one, three others were there waiting.

I had a great edgy outfit all planned out in my head early in the day so headed up to get ready that afternoon with confidence.  Bath, make-up, hair all fell into place. Then I started to get ready and could not find the most important piece. Up and down 2 flights of stairs from bedroom closet to storage room I went - the only 2 places I keep clothing. After my 3rd trip I gave up. One of the blessings of building a closet with the help of stylist is that there is always another option.

My look turned out to be more classy than edgy, although I did have a couple edgy elements.  I had a light black dress jacket with sequins detailing and black knit skirt with from leather look panel by RozeMerie Cuevas at JAC by JC.  With it I wore a statement making large steampunk necklace and drop earrings by Carolyn Bruce and a pair chrome skeleton heels with with spiked rivets by Hades Footwear.  Voila! Still hoping to find that missing bolero jacket on Friday. We will see.

Before I start my show recap, I would like to extend my thanks to the many sponsors that have stepped in to support Vancouver Fashion Week this season. There are two huge teams working backstage to create the looks we see on the runway each day. Hair sponsors are Moroccan Oil and Keune. Makeup sponsor is Ana V. Beauty.  The backstage healthy food that keeps everyone fueled and high energy is from sponsor Hungry Guys. The VFW official undergarment sponsor is Shibue Couture. Water sponsor is Evian. Furniture sponsor is Form Collective. Car Sponsor is Dueck Cadillac and BU Letters provided the #VFW letters by the entrance.

Today it was really tough to pick just a few designers to be covered. There were several who had similar aesthetics making the decision of which to include very tough, so I encourage you to check out wider coverage as below is just a very small representation of what we saw on Thursday. In the end I picked 2, a photographer picked 1 and the media person next to me picked the final. Vancouver designer Mary Ebra was added to my BUY LOCAL column HERE. 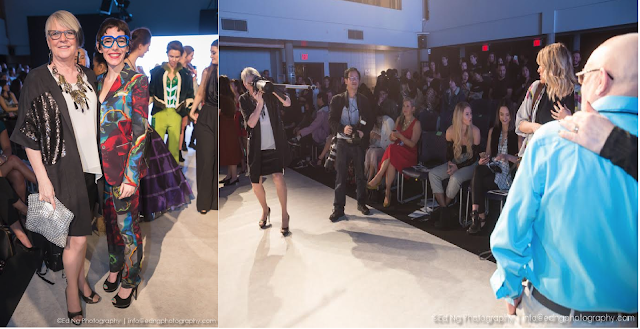 
Taipei menswear designer Joe Chan studied at Ecole De La Chambre Syndicale De La Couture Parisienne then interned at AMERICAN RETRO and then KOCHÉ where is went on to become an assistant designer. In 2016, he launched his own menswear label - Tsung Yu Chan. Inspired by high fashion, street style, modern art and collage, the looks he offers offer a mix of of traditional technique and life experiences.


"Aiming to introduce and re-introduce Filipino culture, Gabbie Sarenas is a brand that immortalizes tradition through clothing & lifestyle. The brand champions & preserves creative Philippine techniques and artisanship to create unique pieces for the modern woman. Each piece is created to tell the romance of heritage with the finest attention to detail. Classic, relaxed, and delicately opulent are embedded in each Gabbie Sarenas piece making it subtlety luxurious. We are storytellers weaving timeless stories while embracing the future of responsible innovation." - from the designer's VFW bio


I was intrigued by this collection.  It was romantic, full of cultural references and sewn absolutely impeccably.  Despite the very architectural shape of some pieces, the designer managed to still keep them soft and feminine. Of particular interest was the embroidery decorating many of the garments. It was mostly script and one next to me in the know said it was words in the designer's home language, I cannot confirm that, but find myself left pondering what those words were saying.


Guatemalan menswear designer Stefano Giammattei began his career at the young age of 16 when he began an internship at tailoring label. He then studied fashion at a local university and presented his first collection at Mercedes Benz Guatemala Fashion Week 2016. "'City F/W' is Stefano Giammattei´s recent collection. As the name suggests, “City” is a collection inspired in the urban lifestyle of Guatemala. Urbanwear has yet to be discovered in Guatemala, Stefano has become a pioneer in this type of clothing, making it his passion and craft." - from the designer's VFW bio

The designer shared that his inspiration often came from trying to make sense of political conflicts, social stereotypes, and the unique components of the Guatemalan individual and I think that was evident in the collection we saw this night. The muted tones in the palette worked well here and I loved the inclusion of 2 prints.  My favourite pieces were the more sculptural asymmetrical garments - they just really popped on the runway.  I love seeing designers give menswear a new twist and Giammattei did that perfectly.

"Designer Aya Bapani was born in a family of famous artists of Kazakhstan, and grew surrounded by creative people who cultivated the love of arts in her. From childhood Aya knew that she would be a designer and would contribute to the development of fashion.Aya’s debut collection was presented at the 2011 Kazakhstan Fashion Week (Spring-Summer 2012). The podium demonstrated a fairy tale in the form of fashion show, which masterly combined music, history, handmade crafts, bright colors, fashionable garments and the character of women. The show gave the audience an entrancing charge of emotions. Designer’s message was so powerful that the audience applauded standing, and some even shed tears. All the fashion critics of the country named Aya Bapani as “a discovery and breakthrough of the year”." From the designer's VFW Bio.

I adored this collection. When you sit through over 60 shows each season over a 6 day period, it's the surprises that sharpen your focus and bring you to the edge of your seat. There is no better surprise than an international designer offering garments inspired by their heritage. Bapani's use of colour, pattern and dye was eye catching. Styling of the models exceptional and the unique accessories took each look to the next level. The garment that would most fit into my closet was a beautiful flowing, floor length drape in white on white. Just stunning. I also loved the shorter jacket version in both white and black.   I really hope designer Aya Bapani will be returning to the Vancouver runway again soon.