on April 05, 2018
Read a previous interview with Lauren Carr covering her journey to becoming an author HERE! 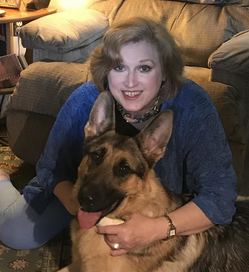 I have read all your books and reviewed many. Up to this point the characters in the different series have had a thread connecting them. With ICE you start from scratch with a whole new cast and direction. What inspired this new series and edgier story line?

Last year, I saw a documentary about a group of former classmates investigating the cold case of their teacher, who had gone missing, only to be found murdered months later. I was inspired by these women, all in their fifties and sixties, combining their talents to solve this cold case. I was working on another book then, so I just tucked the idea into the back of my mind. Every now and then I would bring it to the forefront and massage it for a while. I was very intrigued by the ensemble group of middle-aged detectives combining their talents to work on this case that kept them up at night—a complete departure from my other series.

The character of the protagonist, Chris Matheson came at about the same time. The storyline for ICE called for an ensemble cast—the Geezer Squad. But, I needed a character to be the anchor. The reader meets the Geezer Squad through Chris, who is an outsider because he’s a young law enforcement retiree. I myself have a few friends who either joined the military or went to work for the federal government right out of high school—making them eligible to retire in their early to mid-forties. Technically, Chris is able to join the Geezer Squad. But because of his youth, he’s an outsider who has a lot to learn.


After working with such a strong set of characters through over 20 books, was it hard or exhilarating (or both) to start at the very beginning with blank page for this new series? What was best about changing direction? what was hardest?

It was both hard and exhilarating at the same time. It was exhilarating to do something different. Don’t get me wrong. I love Mac Faraday and his family and friends. They have such great chemistry! I wouldn’t have gone in a different direction to create the Chris Matheson Cold Case Mysteries if I hadn’t been inspired to do so. Honestly, I did not wake up one morning and say, “I’m going to create a whole new series with all new characters.” It just happened.

But, once I started working on ICE, I faced the challenge of making Chris Matheson’s character different from Mac Faraday, Joshua Thornton, or any of the other male protagonists in my other three series. I did not want any readers to accuse me of taking Murphy Thornton, changing his name, and sticking him another series.

So I spent a lot of time with Chris before I started on ICE. Chris is notably gentler than my other male protagonists. He has to be due to his circumstances. He’s surrounded by women. He’s a single father to three little girls. He lives with his mother—a strong independent woman who recently lost her husband. Even their pets are female—until Sterling joins them.

He’s got the gentle hands of a loving father and son, but the heart of a fighter.

While not heavy, this plot did feel a bit darker and edgier to me. Because you are so good at bringing these characters to life, I assume you get drawn into the book's mood as you write. At the end of your writing day, how do you put aside that edgier world and let go? What do you do to relax and have fun?

Humor. I find humor in everything. Many readers have noted the humorous twists that I insert between the lines in my book. Maybe some would consider me warped in that way.

I remember shortly after my husband and I got married close to thirty years ago, my mother and stepfather visited us. The next morning, my mother said she had trouble sleeping because Jack and I had spent half of the night laughing. Not having sex—like most newlyweds, but laughing. She said it made her happy that we were such a joyful couple.

Three decades later, we still make each other laugh on a daily basis. Our son says we’re embarrassing.

That’s something that I do strive for in every situation. No matter how dark or dire, I search for the humor in life. If you keep your eye out for it, you will find it. That humor, even just a touch of it, is what makes things look a little bit better.

I also strive to inject that in my mysteries. Even though murder mysteries are by nature a dark subject, the humor helps to lighten things just a tad to hopefully brighten up my readers’ days.

Every title of yours I have read has at least one pet full of personality as a part of the cast. Each is unique. Do you spend as much time developing their personalities as you do the human characters in your books?

Yes. I have learned that animals are like people. Each one has their own separate personality and quirks. Readers may assume that the things that the animals do in my books are mostly from my active imagination, but that’s not true. Everything that the critters do in my books have been done by real live animals—including Sterling using a low hanging branch as a swing to take him on a ride. A reader sent a YouTube video of a police canine doing that.

In the Chris Matheson Cold Case Mysteries, Sterling is based on my new German Shepherd, who is the nephew of the real Gnarly, who passed away a little over a year ago of cancer. I did spend a lot of time studying Sterling, who is indeed smart like his uncle. But, he’s also a loveable goof-ball. That’s what I wanted to emphasize in ICE.

Looking back through all of the strong female characters you have created, do you see parts of your personality reflected in any of these characters? I'd love to hear a few examples.

There are bits of me in every one of my main female characters—some real, some fantasy.

For example, the character of Helen is a bright, successful, pretty, police lieutenant. However, underneath it all, she is very insecure. She feels like a fraud because of the childhood that she had kept secret from Chris. Even she notes that over thirty years later, after everything that she had overcome and achieved, she still feels like damaged goods—like she’s not good enough for Chris.

I haven’t endured the horrible background that Helen had. But I did grow up a poor farm girl, and was the first person in my family to go to college. There has been a part of me that made me feel like a fraud—all because of things that are basically ancient history. It was the sense of vulnerability that Helen kept hidden from Chris, and eventually was forced to reveal to him, I wanted to bring out in Helen.

The character of Doris Matheson, Chris’s mother, ended up being a big surprise for me. I discovered while proofreading ICE, that her character is very much like my mother, who passed away last September. I did not realize that while I was writing the book or even going through the edits. It was while proofreading it that I was struck by the dialogue between her and Chris. The biting, witty, and loving tone between the mother and son was the same as what I shared with my mother. It was almost like I was channeling that special relationship we shared.

As a fellow author I am always astounded at how prolific you are. What tips do you have for those of us that struggle to get new works out regularly?

I treat my writing like a job. It’s a job I love, but it is still a job.

I keep a regular schedule. The mornings are devoted to “business.” That is social media, answering emails, and book promotion. The afternoons are spent writing. If I’m on a real roll, I’ll write in the evening, too. Or, I may do research.

I set deadlines for myself and fight tooth and nail to stick to them. I have two projects going at any one time. Right now, I am working on interviews and guest posts for the ICE tour, writing the next Thorny Rose Mystery, and mentally plotting the next Mac Faraday Mystery.

My situation does allow me to be flexible, but I still treat myself like an employee. If I miss a deadline, I’ll beat myself up like a slave-driving boss.

I think I read you have another title in the works due out in the fall. Can you please share a teaser about your next project?

I am working on two books that I expect to be released early summer and another this fall.

Look for Murder by Perfection, the third Thorny Rose Mystery, early this summer.

When Natalie ends up dead, the Thorny Rose detectives peel back the layers of Natalie Stepford’s life to discover that the pursuit of perfection can be deadly.