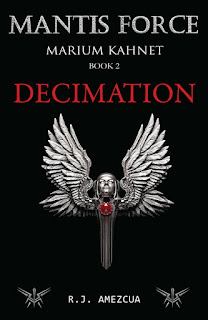 Led by Victoria and Balese, the rogue sisters of the Marium Kahnet have successfully completed their life-long quest for revenge against the sorcerer’s guild. Now a new mission has begun, one of survival, as their enemies seek their lives with a vengeance. As planned, the sisters who managed to survive the destruction of the testing facilities have joined their adopted family’s nefarious criminal organizations, plotting to escape with detailed plans of the Leviathan project to justify their actions to their home world of Ramah. But they are unaware they are being  hunted by elite mercenaries hired by the sisterhood.

​Book 2 in this series picks right up where book 1 left off. I appreciate when an author doesn't spend pages and pages of a sequel recapping what happened in the previous book. BUT, if it's been awhile since you read the first book, then you might need to glance through it go get up to speed.

In Decimation, we follow what came after the destruction of the testing facilities. Deadly radiation has killed millions and is slowly spreading further and further. Some of the Marium Kahnet rogue sister have lost their lives, others are struggling with the scale of the death toll they have caused. This story follows several of them as they try to deal with the guilt as well as struggle to find a way back home.

The story is flowing and the multitude of names of people, places and technology is close to the same as the first book, so not a lot of new things to understand and absorb.  The author has kept the storyline tight and to the point. And the book is on the shorter side like the first, which works well for a SciFi trilogy set in the far reaches of space.  And as in the first book, he ends in a way that makes you want to reach for the next book.

~ Add to Goodreads
Meet the Author -