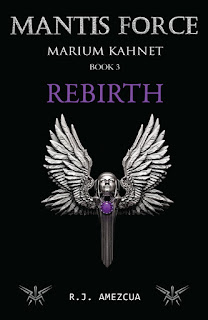 It is a day of prophecy and celebration when Jazrene Vallo accomplishes her ordained task to refashion the Marium Kahnet, and witnesses them finally becoming representatives in the Grand Assembly of the Mantis Alliance. But the victory is soiled by reports of a faction of wayward sisters joining a necromancer Order, the Saurcine.

​The rebels plan to bring forth the Krevomax, the seed of the Tisrad Dragon, to defeat the Mantis Alliance. To combat this new evil threat, in Jazrene Vallo’s last act as supreme leader, she activates the sisterhood’s elite warriors, the Criss Lumbra. Their mission: destroy the spawn of the Tisrad Dragon. Should they fail, it will mean the end of the sisterhood and all peace in the universe.

Rebirth is the 3rd book in the Mantis Force/Marium Kahnut trilogy. All three are serious sci fi offerings for true fans of the genre. They take you to the far reaches of space and introduce you to new species, new religions, alien science and a whole new vocabulary.  Each are fairly short offerings which works well because of all the concepts, characters and terminology you need to absorb.

With book 4 in the works, Rebirth is an important stepping stone to what is to follow. But I didn't feel it was the strongest in the series. Retribution introduced you to most of the players, their religions, the extensive vocabulary and some of the science while developing the series plot.  Decimation moved this plot through a very important step, the destruction of testing facilities and the immediate aftermath. In the first half of Rebirth, we move quickly from one story line to another, following different characters.  It's hard to find a unifying thread to follow at first. This settles down about halfway through and that thread becomes easier to follow as we near this book's conclusion.

I personally would have liked to feel a stronger connection flow through the individual pieces from start to finish. It's not an easy thing to do when you have so many different events to tie together, but it really elevates a story.  I did enjoy reading this book, but it took a bit more focus than the other two.