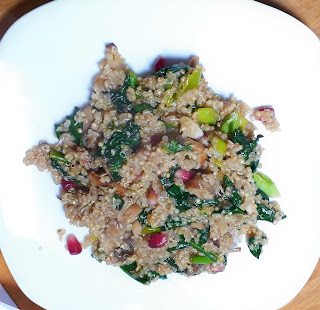 There is such a hilarious story to this recipe.  I wanted to have a quinoa pilaf on the side to go with the Crockpot Maple Honey Chicken Breasts I was making for a small family get together.  After perusing several recipes, this is what I mashed together.

It was tasty, but the broth I used dulled the light colour of the quinoa, so might try another type next time that keeps the lighter colour intact.  Also the almonds became one of those kitchen horror stories you just can't stop laughing about.

I decided I wanted on skin on thinly sliced almonds as I thought they would look great sprinkled on top and still at that crunchy note to the pilaf.  Roasting them brings out the nutty flavour more.

I placed 1/2 cup in the oven and watch and stirred and watched.  Then I got distracted and burnt them. Not a great smell in the house with company coming. It was my last prep thing to do, so I walked away for awhile and then tried again.  SAME RESULT.  My patience for standing by the stove was obviously missing that day and we all know a watched pot never boils, so it was always in the minute I walked away that things went south.

I had now used up all the sliced skin on almonds I had purchased and the house smelled like burnt nuts.  However, I was determined.  I found some sliced almonds in my cupboard and, while not the exact ones I wanted, I managed to roast them perfectly by setting the timer 2 minutes at a time. VOILA! Success!

30 minutes before supper, I got up from visiting with our company and started final prep on the pilaf.  When it was all cooked I popped it into a warmed bowl and set it on the table with a great sigh. It was only when half way through eating that I realized those crazy almonds were still sitting over in the prep area. They never did make it into the pilaf.

I shared this story as we at ate and everyone had a great laugh. I swear the almonds will be in the quinoa next time, but for this time they just served as a humorous note to the evening.  And the photo I took for this column an echoing reminder.

I'll be replacing the pilaf image as I'm not happy with it anyway as soon as I get a chance to make this recipe again! And next time it will have those skin on toasted almonds decorating the top.

Heat 1 tablespoon olive oil in a heavy-bottomed saucepan over medium-high heat. Saute the onion and mushrooms until onion is translucent and mushrooms are slightly brown. Add the quinoa and stir to coat. Add the chicken broth and bring to a boil. Lower the heat and simmer for about 20 minutes, until the liquid is absorbed and the quinoa is tender. Add chopped spinach, cover the pan and let steam a few minutes until fully wilted.