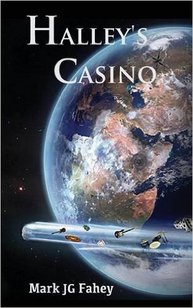 Halley’s Casino is set in 1986. 26-year old Nebula Yorker (Neb to his friends), is patiently awaiting the return of Halley’s Comet. He is about to discover that the world is not what it seems.


Upon the arrival of Halley’s Comet, Neb is confronted by a mysterious stranger who literally swoops out of the night sky. What happens next will change the course of Neb’s life and that of all he befriends.

This stranger (Mr. Tict) reveals to Neb that Halley’s is not a comet at all, but an Intergalactic Casino that has been posing as a comet for countless years. Mr. Tict is the Concierge of the Casino and he has come back to Earth to recruit Neb as his assistant.

What happens next is an eye-opening experience for young Neb that no one on Earth can imagine. It can only be explained by watching old Star Trek reruns, while eating cheese sandwiches and drinking hot chocolate. From androids with attitude to a vast assortment of alien beings and historic individuals, with a touch of time travel from ancient Babylon to 1757 London and back to Rome of 12 BCE, Neb soon learns that his past, present and future have always lain in the stars above.

Even John Lennon is amused!

Starting out on a quiet evening of star gazing, Nebula Yorker finds himself caught up in the most extraordinary time travel and planet saving adventure of a lifetime.

​And that’s only the beginning of what is to come.

I was first introduced to SciFi comedy - a definite sub genre in the SciFi category - through The Hitchhiker's Guide to the Galaxy (a 5 part trilogy) and fell in love.  It's always great to find a new author offering new titles to enjoy. So I dove into book one and two of Mark JG Faheys Halley's Casino trilogy (book three is schedule to be released in the fall) enthusiastically. I was ready for fun and laughter and wasn't disappointed.

In Halley's Casino (book 1), we meet the cast of this fun and crazy romp, and what a crazy diverse bunch they are.  The main character - Nebula Yorker - is out stargazing when his life changes completely and irrevocably. Everything turns left in an instant. A stranger appears while he is in a dark field viewing Halley's comet and whisks him away to the inside of the comet. That's right the inside.  It turns out the comet is actually a casino disguised as a comet moving through the universe and filled with alien races.  A cool twist here is that the intelligent core running this casino alters the aliens into a human type form on arrival for convenience.

What follows is a wild, humorous and sometimes dangerous romp that includes an appearance by The Rolling Stones, time travel, an eminent threat to the casino, conversations with John Lennon and, over the course of the book, the discovery by Nebula of not only the mystery of his parent's disappearance, but the truth of who HE really is.

A fun read with lots of twist and turns. I look forward to the third book in this trilogy. 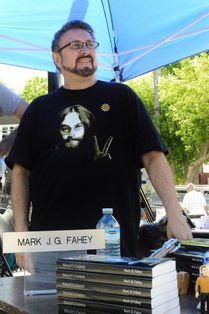