Company Pot Roast in the Crockpot 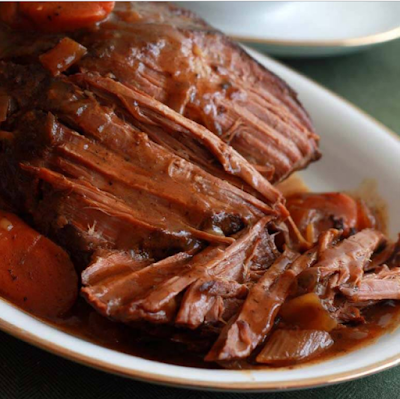 I grew up in the Midwest in the United States.  Back then pot roast was a very specific thing.  You browned it dark on all sides, popped it in a big cast iron roasting pan with a lid, put cut up potatoes and carrots around it, added some water and seasonings, covered and cooked on low until it was falling apart.

The meat was a little dry on it's own, but it literally fell apart into shreds. You then topped it with a drizzle (or drowned it in a pile) of flavourful gravy made from all the juices in the bottom. YUM!

Now it seems people prefer a roast that is medium in the middle so it's juicier, but that just doesn't appeal to me. It has to be a fully cooked pot roast to be cooked all the way through for it to make its way to my plate.

With a family dinner coming tomorrow, I was on the fence about what to cook. I know the way I make a pot roast isn't the current trend, but I decided to throw caution to the wind and just do what I love. However, rather than the standard simple way my mum always did it, I decided to try a recipe that took a little different approach on the juice the beef cooked in.  After reviewing a lot of options, this recipe from The Daring Gourmet seemed to balance the addition of more flavour elements, without making the prep process overly complicated and fussy.

With it I'll make Scalloped Potatoes (not Au Gratin, those are different), as I can make them in the morning and just reheat. I'll put out one expected veggie that I know most will eat and then may try another new to me recipe that roasts Asparagus and Carrots together.  If it turns out, I'll post that recipe next week.  Rolls and dessert (both purchased or homemade) will round out the meal.

With the potatoes made ahead of time and the meat in the crockpot, I'll only have the veggies to pull together at the last minute. That means more time to relax and enjoy my company instead of missing the fun while slaving in the kitchen.

Rub the roast all over with the rub mix. Heat the oil in a dutch oven over high heat and liberally brown the roast on all sides. Place the roast in a slow cooker. Add the broth to the skillet, return to a boil, and whisk to loosen up the browned bits. Add the tomato paste, wine (if using), and salt and whisk to combine.

Pour the liquid from the slow cooker into a medium stock pot, leaving the roast and vegetables in the warm slow cooker. Bring to a boil and whisk in the gravy slurry and continue whisking until the gravy is thickened. Season with salt and pepper.

Place the pot roast on a serving platter and spoon the vegetables around it. Discard the bay leaves and bacon. Pour a little of the gravy over it and serve with gravy on the side along with potatoes and your choice of sides.
companys coming crockpot crockpot recipe foodie make it tonight pot roast pot roast recipe recipe recipes slow cooker slow cooker recipe YUM