Interview With Daniela Valenti, Author of The Diamond Rose (A Sentinel 10 Novel) 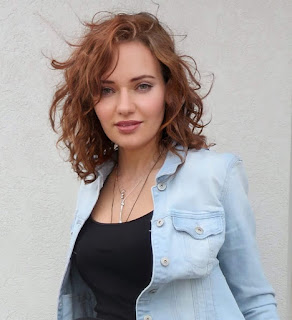 Can you share a bit about your journey to becoming a writer/published author? Any interests or early signs as a child that hinted you would later put pen to paper?
My prior attempts at writing began at age nine with a story about a doctor’s cat, and then a short sci-fi story at age twenty-three. Thirteen years later, my foray into serious-minded writing simply happened. I began writing in 2017, after I returned from a trip to Prague for an international forensic psychiatry conference. It was a moment when all sorts of aspects of myself, my life experiences and my interests came together, like a self-assembling puzzle!
The story came to me like a movie, unfolding in my head as I sat on an airplane, staring at the screen-less back of the chair in front of me, for the eight-hour trip back to Canada. Once set in motion, the wheels of creation kept on turning, and resulted in the Sentinel 10 series.
What drew you to write in the unique genre of Paranormal Romance?
It was not a choice, it just happened that my novel fit into that category. 😊 The story was born, and then it was classified.
Where did the inspiration for The Diamond Rose come from? How about the inspiration for the main characters you created?

The actual designation of the Sentinels developed long before any real story. It came with the original kernel of an idea, back when I was 20 or 21, and was still watching Buffy the Vampire Slayer, the TV series. I suppose the name came from that. Slayer, Sentinel. It was a long time ago.

As for the characters, a writer’s characters are a part of themselves. They’re rarely created out of thin air. There was animated movie titled “9”, in 2009, that illustrates this concept quite well: the creator in the movie breathes in parts of his soul into each of the nine characters.

But at the same time, some of my characters, especially the villains, are inspired by real people. As an example, in Book 3 “The Ghosts of Evil”, there is an evil girl with a burn on her hand and a snake ring on her finger. Totally inspired by a real person. The villain in Book 2, The Crystal Skull, is very loosely based on my ex. Shh… Don’t tell him. Haha.
I think The Diamond Rose is the first of a series? Have you mapped out an overall story arc for the series or are you creating the story lines as you start each book?
Absolutely! I already wrote the ending. I’m currently working on Book 8 of the series. The Sentinel 10 series has 10 books, in various stages of finish. Actually, Books 8 and 10 are over 85k words already so they will have to be split into 2 books each. The arc is about Amanda evolving over the next ten years of her life as the Sentinel 10, as she discovers the different faces of love and evil.

Work madly when inspiration hits, period. It used to be every single day, for the first year. Even during lunch hour. The stories were pouring out of me. I still went to work and everything, but every free moment was spent on writing. Then after about 18 months, it slowed down to a trickle. I write a scene at a time, whichever scene is on my mind.
I have the whole big storyline in my head at all times, so choosing a specific scene depends on my mood. That’s why the remaining 8 books are in various stages of finish :D

How do you feel your career as a psychiatrist helps your work as a fiction writer - plots, character development, interactions, etc. ?

It’s hard to say, but narcissism is big in all of the books in the series (some more than others). It helps that Amanda’s best friend, Lydia, is a psychiatrist-in-training. One of the points this series makes about narcissism is that a narcissist can only be “cured” by supernatural intervention!

I could talk about narcissism endlessly. A narcissist, a true narcissist, is never going to change. It comes down to their lack of a real self, which is such a puny, infantile one, that if they were to truly confront the reality of who they are, they would fall apart, so they guard against it, with a quasi-delusional conviction of their superiority and a need for control.

To understand some aspects of narcissism better, think of the story of Dorian Gray, the fictional character whose portrait aged but he didn’t. The parallel with narcissism is that being forced to look at his portrait was lethal to Dorian. Being confronted with their true self can be devastating to a narcissist.

As an author - what do you enjoy most about the writing process? What feels like a chore?
I enjoy everything, but having to add scenes for the flow is definitely a chore. My stories come to me like a movie, or like a number of specific scenes in a story, but it’s not always enough, some other things need to be added, sometimes, for the flow. If I have to actively think of something to add, it’s difficult. It took me over a month to develop the actual description of Amanda’s first date with Alain! But then it finally hit me, thank goodness.
With double careers as a psychiatrist and an author, you must be incredibly busy. What do you like to do that helps you walk away from it all?

Writing is what helps me walk away. I don’t force myself to write. Writing is a hobby, a way to cope with stress. But my stories are everything to me. I am fiercely determined to do everything in my power to make them succeed. When I have a goal, I stop at nothing. I love my stories like Alain loves Amanda: he loves her and he needs her, desperately. “I would die for you, Amanda, I love you so much.” Ooh, now I sound crazy! Hehe.
When can we expect your next book in this series? Would you like to share any teasers with readers?
-- The Crystal Skull is expected in early May 2021, maybe sooner. Teaser: we’re gonna have a real villain in there, as opposed to Book 1. Also, the love triangle aspect of Book 1 continues…
connect with the author:  website ~ twitter ~ facebook ~ instagram