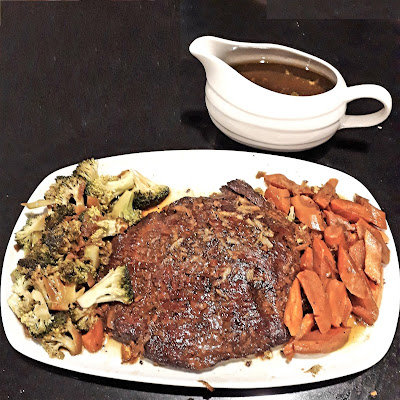 When I shopped at Costco over the last few months, I made of point of buying an assortment of meats which I then split into smaller packages and stored in my freezer. This lets me pull out what I need when I need it, without running to the store as much.
Today I wanted to use one of the flank steaks I had purchased. Flank steak (or skirt steak as some call it) shreds easily, so most of the recipes I've made in the past are for tacos and fajitas. Been there, done that. Check out my posts -  Carne Asada and Carne Asada Burrito Bowl! I wanted to find a recipe that took my flank steak in a different direction. On Yummly I found just that - Teriyaki Flank Steak.
The piece of steak I had was 2 lbs. so I had to up the other ingredients just a bit.  I dusted it with salt and pepper on both sides, then browned it in a large non-stick pan. To get a good sear on it I put a weight on top that flattened and increased it's contact with the frying pan's surface. You don't get that fried crust in a crock pot - you have to brown it first. The recipes says any kind of wine. I was leaning toward red, but only had white and rose in the cupboard so settled on the rose.
Then I decided I wanted an all in one meal. The original recipe only cooked the meat in the crockpot. I decided to throw in some diagonally cut carrots (thicker pieces also cut lengthwise) and some cut up broccoli. . All I needed to make on the side was a pot of rice, and that was a snap in my rice cooker. You could also service this on some thin Asian noodles. 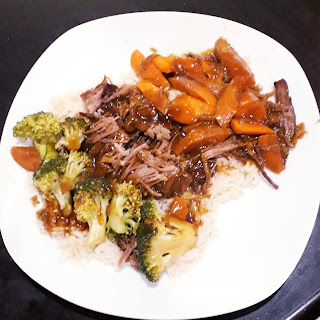 Last but not least, I wanted a thickened sauce. I took out the cooked meat and vegetable, mixed up some cornstarch with water, and stirred it into the liquid in the crockpot.  It's always a good idea to taste and adjust seasonings at this point.
This turned out really tasty.  I placed it on a long, rectangular platter with the meat in the middle and the veggies on opposite sides.  The thickened sauce was offered in a gravy boat. We each put a layer of rice on our plate, added first the meat and then the veggies, and  then drizzled sauce over the top.  You could have chopped green onion to sprinkle on top if you want.
Glen liked his plate heaped one layer right on top of the other. I arranged my across the rice with strips of broccoli, then meat, then carrots.  It really doesn't matter one way or the other.  And it was given a love this thumbs up by Glen, so def staying on the menu. Best of all it was so easy.
Enjoy!  And if you do make it, please share your thoughts.
= = = =
Slow Cooker Teriyaki Flank Steak
Yummly states this as 4 servings, but I find that always depends on your serving size and how much meat you are giving each person.
Ingredients -

Extras - I added diagonally cut up carrots and broccoli florets the last few hours of cooking.
I also thickened the broth in the pot with a mix of Cornstarch and water.
Can eat as is or place on hot cooked rice or thin Asian noodles.
Another options would be to sprinkled sliced green onions on top before serving.

Instructions -
In a small bowl, mix the wine, soy sauce, olive oil, sesame oil, brown sugar, ginger, garlic, and pepper. Set aside.
Rub the steak on both sides with sea salt and black pepper, then heat the oil in a large skillet. Place the steak on the hot skillet and sear on both sides. You don’t want to cook the steak, just give it a nice browned skin. I put a weight on it to help it sear better.
Place in the slow cooker and pour the sauce on top. Cook on low for 6-8 hours. I cooked mine 7 hours.  At the 5 hour mark I added the carrots. At the 6 hour mark I added the broccoli and turned it up to high. If you like them crunchier leave on low. Veggies that are down in the sauce will cook more than those laying on top of the meat.
Once cooked, remove the meat - and veggies if you added them - from the slow cooker, I suggest keeping them warm by placing in the oven on a low heat. You can thicken the sauce in the crockpot with the temp turned on high, or you can pour the liquid into a sauce pan and do it on the stove. I find the 2nd option quicker.
Slice the meat across the grain and place in the center on a platter Arrange the veggies around the meat, then drizzle with the sauce. If you want you can sprinkle with green onion.  Have the extra sauce on the side. I like more sauce, but it would get too soupy on the platter. So best to add right onto each person's serving.
Enjoy!
crock pot easy recipe flank steak foodie make it tonight recipe recipes skirt steak slow cooker steak teriyaki teriyaki steak YUM