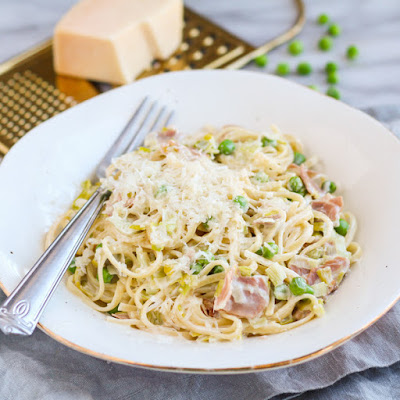 Another day, another chance to try a new recipe. This one is again from the Mealime free app (view on phone, tablet or the website) and looked super fast and easy.  Sometimes I really like to dive in and work hard to create something spectacular, especially if it's for company. But on a daily basis, most of the time I prefer to make a delish meal happen without too much fuss.
Like most women of a certain age, I try to watch my calories. This means I don't often cook pasta. But let's face it, pasta is serious comfort food, especially in the winter. And if you have high quality ingredients, you can take liberties with the recipe and it still usually is a winner.
A couple of notes to consider. If you are truly trying to totally avoid carbs, you could use zucchini Zoodles.  If you like them crunchy, you can just put the hot pasta sauce on them and stir. Not what I would choose for this particular dish.  Here I would probably very lightly stir fry the zoodles just a touch. Another option I personally love is to replace just part of the pasta with zoodles. When I do this I don't cook the zoodles. I just dump the hot drained pasta on them and stir. Then I add the warmed pasta sauce and mix well. Zucchini softens quickly so the double hit of hot works well. You get just a bit of crunch along with the chewy pasta.  And of course the last choice is using all regular or gluten free linguine. Sometimes this is the only choice as I am craving a big bowl of deliciousness.
Other changes I could see are using sliced snap peas instead of the frozen peas. For this option you would need to sauté them until almost done.  I like both ways - frozen for when I'm in a rush and snap peas for when I have a bag of fresh ones that need using up NOW.  Another option would be to sub bacon for the prosciutto if that's what you have on hand.  A little different taste, but similar enough to not change the overall recipe much. Last but not least is the leeks. I only have one, but I have some shallots laying around so will use a mix. I would suggest at least one leek though.
UPDATE - While I did enjoy this and found it super quick to pull together, I personally found the amount of cream cheese made the sauce a little heavy and it masked the other flavors. I couldn't taste the prosciutto in particular. So I'll be making this again for sure, but I'll be lightening the sauce a bit so the other flavors come through better.
= = = =
Creamy Leek, Prosciutto & Pea Linguine with Parmesan
2 Servings

While pasta is cooking, trim off the root end and dark green top of the leeks, leaving only the white and pale green parts. Cut leeks in half lengthwise and rinse under running water, separating the layers to remove any dirt and grit. Slice crosswise into ½-inch half-moons. Peel and mince garlic.2 cloves garlic. Cut the cream cheese into small pieces and set aside.

Finely grate Parmesan and add to the skillet (reserving a small handful for garnish); stir to combine. Add drained pasta to the skillet and toss to combine; add additional pasta water, 1 tablespoon at a time, if necessary, to reach a saucy consistency.