I Bificus by Biff Naked 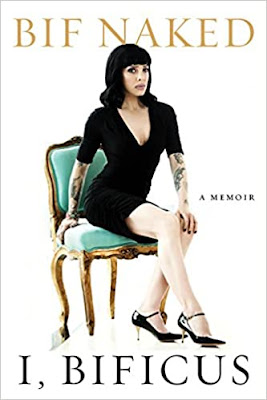 From one of Canada’s most original musical artists comes a new memoir about life, love, loss and triumph.
Synopsis -
Bif Naked was born in secret to a teenager living in India, the product of a Canadian girl and a British boy. She was rejected by both families, hidden away in a mental hospital and adopted by missionaries and then moved to North America. She began what she recalls with ironic humour as a “charmed life.” Targeted by girl gangs and facing other abusive situations, she escaped this early life by joining a punk rock band and leaving on tour, where she married the drummer and hit a downward spiral that found her on the floor of a Vancouver drug den.

Through it all, her creative personality and unstoppable humour were her weapons of self-defence. Bif showcased her life’s journey in tattoo ink across her body and, with her unique ability to transform her true life stories into song lyrics, she found her voice as a solo artist, started her own record company and at twenty-three years of age became an international recording artist. Throughout her remarkable career, armed with her singular talent and instantly identifiable look, Bif would captivate the imagination of audiences and media alike, releasing nine albums and twenty-one videos. She embarked on seemingly endless international tours, several feature films and multiple television roles, only to be struck down with breast cancer at the age of 37. Bif would discover her passion for advocacy, as a triumphant survivor and someone who helps others first. This is Bif Naked’s story so far . . .
Review -
I have never been into punk rock as a genre, so never really knew much about Bif Naked. As a fellow Canadian I had definitely heard of her, but that's as far as it went. For a couple reasons, she has come into my awareness more and more lately, a nudge from the universe. I listened. I love hearing people share their stories, so decided this was the right time to snag a copy of I, Bificus and give it a read. I'm so glad I did.
Bif is definitely a one-of-a-kind soul who embraces a life of her choosing fully - something I am always encouraging people to do with my own books and appearances.  She shares the highs and the lows, the good decisions and the bad, and shares them without apology. This is how my life unfolded. What a ride!  I was also surprised to learn this kick ass female on stage who could throw a punch when needed, also tended to be a people pleaser with her band in particular off stage. I was also unaware of how male oriented the punk music scene was and how hard it was for her to be taken seriously as a female punk artist.
More than anything her positivity and gusto for life drew me in.  While I may not find punk music my happy place, I have now becomes a huge fan of Bif Naked as an artist, a woman and as a human being. Hope I get to meet her one day. And if you haven't read this memoir yet, I highly suggest it.
Buy the book:
Meet the Author - 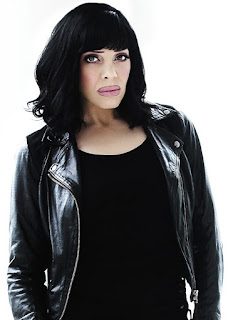 Bif Naked was born in New Delhi, India to teenaged American parents attending private school, and placed in an orphanage there. She was subsequently adopted by American missionaries. The family travelled around and eventually settled in Winnipeg, where Bif graduated from John Taylor Collegiate and studied theatre at the University of Winnipeg.

Prior to her solo career, Bif played with punk bands Gorilla Gorilla and Chrome Dog. Her album I Bificus is certified Canadian platinum (100,000 units sold), while Purge is certified gold (50,000), and was nominated for best rock album at the 2001 Juno Awards. The song "Spaceman," from I Bificus, earned a No. 1 position on national Canadian charts and a No. 2 position on Billboard magazine's international charts, making it the most played independent song in Canadian recording history.

Bif has toured Europe, the United States and Canada as a headlining act, and has performed on bills with Snoop Dogg, Billy Idol, Dido, Sarah McLachlan, Nickelback, Kid Rock, Sheryl Crow, Chrissie Hynde, the Foo Fighters, the Cult and many more. She's also played the main stages at Edgefest, Lilith Fair, The Warped Tour, Sno Jam and other major festivals.

In January 2008, Bif announced that she had been diagnosed with breast cancer, and wrote and recorded her current album, The Promise, during her year-long chemotherapy and radiation treatment. The album, released in 2009, was dedicated to her fans. "I was determined to make this new record if it was the last thing I did," says Bif, who is now once again strong, healthy and invigorated. As usual, she continues to defy the odds