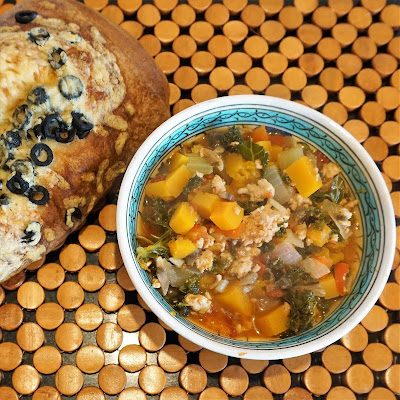 My daughter sent me a link to a recipe on Mealime that she had enjoyed. I put it on my must try list, but 2 weeks later still hadn't managed to get organized in time to make it.  Last night was going to be it for sure, but then we ended up talking to our son in Colorado, and by the time we finished it was too late.  So tonight I was determined!
When I looked at the original recipe, I knew there were some things I wanted to change.  It was missing a pop of color in particular. And it used a green pepper. I can eat them. And I know in certain cuisines you need them to get the traditional flavor.  But for my tastes and for the color pop, I always substitute a brightly colored red, yellow or orange one. They are sweeter and they just look more interesting to me.  In this recipe the red was the perfect choice.
I also wanted to add some leafy greens. What better to add than some chopped Kale? It is super nutritious and holds up well to the 20 minutes of simmering.  It also doesn't shrink as much as spinach. And although I think it's a great idea to cook the ground turkey separately and add at the end, I just felt like stream-lining the cooking process tonight. It still turned out great and as a bonus, I only had one pot to wash.
Below is the version I created with a few notes from the original recipe.  Don't be afraid to mix it up a bit yourself. As I noted below, if you wanted a spicy chili, you could add diced jalapenos to the mix.  And I am sure there are other changes you might want to make to suit your taste.
= = = =
Turkey, Butternut Squash & Kale Chili
Serves 2
Ingredients -
3/4 - 1 lb.     Ground Turkey
1                   Stalk celery, sliced
2 cloves        Garlic, peeled and minced
1-2 T             Olive oil or coconut oil
1                   Red bell pepper, seeded and cut into chunks
1/2 lb            Mushrooms, sliced or coarsely chopped
1/2                Med. onion diced (yellow or sweet)
1 T                Olive or vegetable oil
1/2                Butternut Squash, peeled and diced
2 C               Kale, coarsely chopped
1 C               Vegetable or chicken broth
1                   14.5 oz can diced tomatoes including the juice
2 tsp              Paprika
1 tsp              Chili powder
1/2 tsp.         Nutmeg
1/2 tsp.         Oregano, dried
1/2 tsp.         Salt
1/4 tsp.         Black Pepper
Optional - This has a really nice flavour as is, but if you want something spicier, you could dice a jalapeno pepper and sauté it along with the vegetables.
Directions -
Wash the produce and then prep as instructed above.
A note on the ground turkey - the original recipe I adapted cooked the ground turkey separately by frying in a pan with a little oil and then adding right at the end. This is a great way to do it for several reasons.  BUT it was just Glen and I, so I fried the turkey with veggies right at the beginning and it simmered in the pot along with everything else.  This saved me dirtying a frying pan and kept the prep simpler.  So you have a choice.
In a large pot over medium heat, sauté the onion, garlic and celery in the oil for a few minutes to get them started.  Then add the bell pepper, mushrooms and turkey if you want to cook it in the soup (if not just add the bell pepper and mushrooms).  Continue to sauté until the veggies are softened and the ground turkey has just lost all pink.
Add the diced butternut squash, chopped kale, broth, can of diced tomatoes with juice, and all the seasonings.  Stir well and gently press the veggies down into the broth. This is a chili, not a soup, so there isn't a lot of liquid. Then lower the heat and partially cover (note - the original recipe didn't cover the chili at all, but I felt I wanted to retain as much liquid as I could).  Let simmer gently for about 20 minutes. I gave it a gentle stir about half way through and this let me check to make sure it was still just simmering gently.  You don't want the squash to disintegrate by over cooking it. When the squash is tender, the chili is ready to serve.  (If you chose to cook the ground turkey separately, you would add it to the chili now along with any juices in the frying pan.  Stir gently until well combined and heat through).
Serve in large bowls with crusty rolls or a freshly made artisanal focaccia. I found an olive and parmesan loaf that I offered with my chili. YUM!
butternut squash chili foodie ground turkey kale make it tonight one pot recipe recipes stew stoup turkey chili YUM