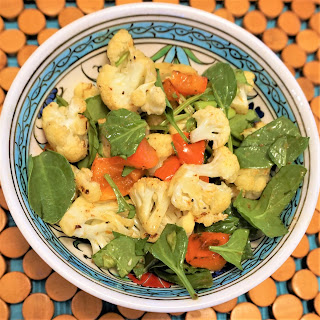 Hallelujah! I seem to be going through a bit of a creative phase in the kitchen. It won't last, but while it's here I'm going to enjoy it fully. I am trying once a week to make a plant based meal using Vegan meat products from the sampler box I purchased for The Very Good Butchers in Victoria (if you missed my interview with them you can read it HERE).

For this week I pulled out the 4 pack of Smokin' Bangers. I was to serve them as sausages in a bun with all the toppings to add. As that was simple, I wanted something out of the ordinary to serve on the side other than fries.  I had a cauliflower in the fridge that needed using, so was looking up ideas for side dishes with it. Then out of the blue, I had a thought. I wondered if they ever made salads out of roasted cauliflower. Where this idea came from I don't know, but as I searched the web, I discovered the answer was a resounding yes. There were lots and lots of ideas out there.

After glancing at the basics for a few, I decided to wing it with whatever I had. I knew I wanted the salad to have a few pops of color, so added the red pepper, green onion and some chopped baby spinach.  The red pepper I roasted with the cauliflower, the rest I added raw.  Another great color you could add would be some diced carrot. I would roast it as well.

Last but not least, I was trying to avoid too much cheese (doctor's orders) so sprinkled the roasting veggies with nutritional yeast as a substitute before I baked them. Want the real thing? You can add some shredded fresh parmesan to the salad just before tossing if you like. Or leave them both off. 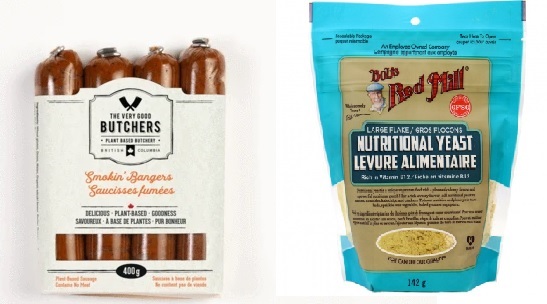 Then for the top I wanted to sprinkle on some chopped pistachios I needed to use up. BUT I totally forgot in the last minute prep so it got missed. The pic above would look so much nicer with sprinkled on top. Another cool idea I saw was to add some fresh pomegranate seeds on top for an additional pop of color and a unique flavor blast.

I've included lots of ideas here to make this salad your own.  And you can see even more in a web search if you're curious. Enjoy!

= = = =
Warm Roasted Cauliflower Salad
Serves 2
Ingredients -
1/2                Medium head of Cauliflower cut into bite size pieces
1/2                Large Red Pepper, seeded and cut into bite size pieces
2 T                Extra Virgin Olive Oil
2-3 T            Nutritional Yeast (more if you like, or you could add shredded parmesan to the salad after.)
Salt and Pepper
3                   Green onions sliced, include some of the green tops
Large handful of baby spinach, chopped
Optional - Chopped Pistachios to sprinkle on top after plating.
Dressing (note, many recipes use a Tahini Salad dressing instead) -
2 T                Basil Olive Oil
1-2 T             Peach White Balsamic Vinegar (up to your tastes how much vinegar you like)
1 tsp              Dijon Mustard
Instructions -
Preheat over to 425 degrees. Toss cauliflower and red pepper with oil and spread on a cookie sheet (I line the cookie with with foil for easy clean up but not necessary).  Sprinkle with nutritional yeast, and then salt and pepper to taste.  Bake in the pre-heated oven for 20 - 30 minutes, turning them half way through. They should have brown flecks and be slightly carmelized, but be careful not to overcook.
While veggies are roasting, add the basil olive oil, peach white balsamic vinegar and dijon mustard into a medium bowl and stir well to combine.  When the veggies are done, add them to the dressing along with the baby spinach and the green onions  Toss well to combine. Add more salt and pepper if desired.
I was going to sprinkle some chopped pistachios on top after plating to add some crunch and a little more colour, but totally forgot and still enjoyed it.
Note - there are a lot of interesting dressings out there for roasted cauliflower salads. I am intrigued by a Tahini salad dressing used by many. Might try that next time but this was what I had in my pantry ready to go today.
Cauliflower cauliflower salad foodie make it tonight recipe recipes roasted cauliflower salad salad recipe smokin bangers the very good butchers warm salad YUM