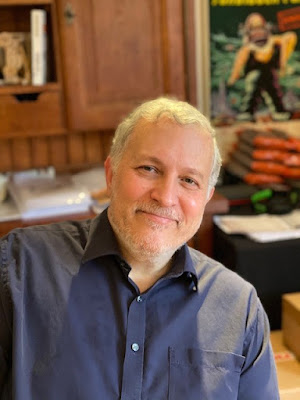 Can you share a bit about your journey to becoming a writer/published author? Any interests or early signs as a child that hinted you would later put pen to paper?
That is a great question because it is forcing me to think about it! I suppose everyone has a book inside of them, and over the years I had any number which I started and unfortunately abandoned at one time or another until Fabyan Place. As a youngster I loved to read – my mom was convinced I taught myself, but I had a older brother who shared the skill. I became voracious with books, reading anything I could get my hands on under the covers at night with a flashlight. It opened a new world for me!

Fabyan Place is a work of historical fiction. What inspired you to write this particular story?

From a very young age I always enjoyed reading historical fiction – I’m pretty sure the first books I took out of library were books loosely called ‘I was there’ about characters who were witnesses during historical events like Pearl Harbor or experiencing the Pony Express. I thought it was a great mix between what I loved reading (history books) and fictional story telling blended together.

Fabyan Place was inspired by a family story of my Mom’s brother who was captured by the German’s during WWII, and the stories I remember being told about that when I was young.
In your intro you mention that "most of the historical events in the book actually transpired. How much and what kind of research was required for you to present an accurate picture of these events?

I wrote the story organically, which means I did not have an outline other than the very high-level idea and the direction I wanted it to take. I had a fairly detailed background from the reading I had done on the war years, and as I imagined my characters in certain situations, I did internet investigations to find out if what I was writing was plausible and even if certain vocabulary was used. From time to time, I came across a certain historical tidbit like US African American soldiers protesting for better treatment in England, and I included that in the story.

I try and write something every day, even if it is only two or five hundred words (the equivalent of an elaborate email!). But there are days when I have nothing, so I put my story aside for a week or two until inspiration hits me. And that can be in the form of me reading another book, an article in the newspaper, or even watching a television show. When the inspiration happens, I immediately start writing.
As an author - what do you enjoy most about the writing process? What feels like a chore?

Enjoyable? Getting an idea down on paper and crafting it into something someone would want to read. I don’t consider the times that I put the work aside as ‘writers block’, which is how people sometimes describe it. I know the inspiration will come, and when it does the words flow easily. Sometimes, I will be stuck on how to make something work, and I will come across something that I know I want to include later (or earlier) in the story. The process is not linear, which is something I really enjoy.

A chore? Honestly, not working on some element of my stories, be they writing or marketing. I hope at some point to be able to sustain myself with my writing!
What would you most like readers to know about you? What interests do you have apart from writing?
I’d like them to know that I originally wrote a lot, until someone very important to me suggested that I was not a terribly good writer. I put down pen and paper, except for business and the occasional essay that I shared with friends, for decades.

When COVID hit and we had a fairly draconian lock-down here in London, I re-thought that criticism and less than a year later finished Fabyan Place.

If there is something you like doing, don’t stop and keep on trying!

I have lots of interests, but I think one of the things that I find very gratifying is discovering my roots. I have a fairly complex level of ancestors as portrayed in Fabyan Place (that bit was very accurate), but it has become more involved in the last few years. It was one of the things that helped inspire my writing. A few years back my list of relatives didn’t extend beyond the far end of my great-grandparents, but after re-connecting with a friend from high school, who in addition to being a chemistry professor is a professional genealogist, the list (and potential stories!) grew by the thousands!
Do you have any new books in the planning or writing stage?
Of course! There is a character in Fabyan Place who is in the newly formed Criminal Investigation Division of the US Army. I enjoyed writing him in this book, and during my research I learned a great deal about the work in which they were involved, something you never see in movies and rarely read about. Many of my beta readers liked the character. And I discovered many were unusual and interesting crimes. So, I’m outlining a couple of books that involve this character solving them in the 1940s.
Connect with the Author: Author's Website ~ Twitter ~ Facebook ~ Instagram ~ Goodreads
author authorinterview fabyanplace fiction historicalfiction interview ireadbooktours People war WWII