Grace Among Thieves (A Grace Michelle Mystery) by Kari Bovee 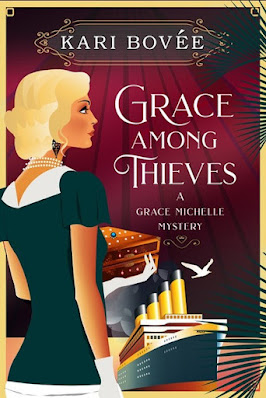 Bones of the Redeemed review - HERE
Folly at the Fair review - HERE
Grace in Hollywood Review - HERE!
Grace in the Wings Review - HERE!
Synopsis -
A priceless heirloom worth its weight in lives. Can she crack the case before she becomes a killer’s trophy?
Hollywood, 1924. Grace Michelle’s professional star has risen. Now a successful costumier for a major studio, the ambitious woman has just about everything she wants. But when the father she thought was dead reaches out to reconnect, the talented designer doesn’t know what to think… especially after his new wife is kidnapped.

Discovering her dad is mixed up with a stolen Russian artifact, Grace puts her sleuthing skills to work to rescue the abducted lady. But with a famous actress murdered in connection with the missing valuable and a man she put away stalking her for revenge, the frazzled amateur detective fears getting to the bottom of this crime will leave her six feet under.

Can she hunt down the treasure before it bankrupts the lives of everyone she loves?

Grace Among Thieves is the nail-biting third book in the Grace Michelle Mystery historical series. If you like bright-but-beset heroines, breathtaking twists and turns, and the glamor of a lost age, then you’ll adore Kari Bovée’s riveting tale.
Review -
As you can see above, this is my fifth review for author Kari Bovee and I enjoyed just as much as the previous four. This third book in her Grace Michelle Mystery series brings the same elements, love, murder, mystery and intrigue along with a touch of the supernatural in the form of contact with those who have passed.
The story in book three picks up where book two left off. Grace is living on the west coast on a ranch with her husband Chet and several orphan children. She is working as a costumer on a big budget film.  However, a new element is introduced. Her father who she thought was dead may not be. A man claiming to be her father is in town and wants to meet her. And so the plot thickens.
Several diverse elements are offered, an opening about a stolen Russian treasure that has been hidden, her deceased father supposedly appearing alive with a young wife, a Russian actress in the play she is costuming whose beloved relative was beaten up, and a reference to a package that can only be the stolen Russian treasure mentioned in the opening. The more Grace becomes involved, the more danger she is in. They know where she lives and works.
Grace has a lot on her shoulders here, a ton of balls to keep in the air, so keep everyone safe. And she feels the pressure. Can she find a conclusion that creates a happy ending for everyone?  You'll have to read to find out.
Buy The Book: Amazon
Meet the Author -
2020 Author Interview HERE! 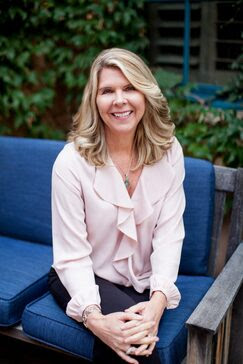 When she’s not on a horse riding along the beautiful cottonwood-laden acequias of Corrales, New Mexico; or basking on white sand beaches under the Big Island Hawaiian sun, Kari Bovée is escaping into the past—scheming murder and mayhem for her characters both real and imagined in her historical mystery novels.

Kari Bovée writes the award-winning Annie Oakley mystery series and the Grace Michelle mystery series. In 2020 she was honored with First Place in category for the Chanticleer International Clue Awards for her book Folly at the Fair. In 2019 she was awarded the NM/AZ Book Awards Hillerman Award for her novel Girl with a Gun. The novel also received First Place in the 2019 NM/AZ Book Awards in the Mystery/Crime category, and won First in Category in the International Chanticleer Murder & Mayhem Awards. It was also a finalist in the 2019 Next Generation Indie Awards. Her novel Grace in the Wings won First in Category for the 2019 International Chanticleer Chatelaine Awards. Peccadillo at the Palace won Grand Prize in the 2019 Goethe Awards, and was a finalist in the 2019 Best Book Awards Historical Fiction category.

Kari Bovée has worked as a technical writer for a Fortune 500 Company, has written non-fiction for magazines and newsletters, and has worked in the education field as a teacher and educational consultant.