The Storyteller: Tales of Life and Music Hardcover by Dave Grohl 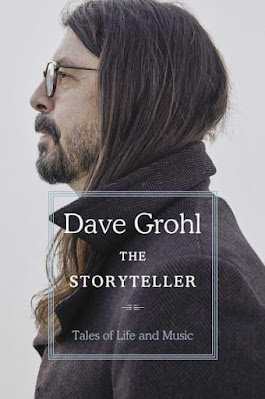 So, I've written a book.
Synopsis -
Having entertained the idea for years, and even offered a few questionable opportunities ("It's a piece of cake! Just do 4 hours of interviews, find someone else to write it, put your face on the cover, and voila!") I have decided to write these stories just as I have always done, in my own hand. The joy that I have felt from chronicling these tales is not unlike listening back to a song that I've recorded and can't wait to share with the world, or reading a primitive journal entry from a stained notebook, or even hearing my voice bounce between the Kiss posters on my wall as a child.

This certainly doesn't mean that I'm quitting my day job, but it does give me a place to shed a little light on what it's like to be a kid from Springfield, Virginia, walking through life while living out the crazy dreams I had as young musician. From hitting the road with Scream at 18 years old, to my time in Nirvana and the Foo Fighters, jamming with Iggy Pop or playing at the Academy Awards or dancing with AC/DC and the Preservation Hall Jazz Band, drumming for Tom Petty or meeting Sir Paul McCartney at Royal Albert Hall, bedtime stories with Joan Jett or a chance meeting with Little Richard, to flying halfway around the world for one epic night with my daughters…the list goes on. I look forward to focusing the lens through which I see these memories a little sharper for you with much excitement.
Review -
I interview people about their lives, it is my passion. I love reading unique stories too. So it's no surprise The Storyteller by Dave Grohl drew me in. He is by nature raw, in your face and 100% authentic, what you see is what you get, and he writes with that same honesty.  As I read, I felt like I was sitting in a room with him, listening as he shared stories from his life.
Never a hard rock punk fan, I was intrigued to learn more about the musicians and the culture that created this wave of change. The more different from me someone is, the more I want to hear about it. I love diversity, I love the surprise of seeing the world in a different way.  We learn of his childhood, his early time touring as a high school drop-out in a van earning just enough from each gig to get to the next.
We follow his time from Scream, to Nirvana, to Foo Fighters, each a step up the musical food chain until he has a personal crisis - he iss no longer "us", he is now a "them" with a mainstream following.  What did that make him? Who was he?  And he talks often about the place music holds in his life, the importance and the gifts it brings.  One of my fav parts when he tried to explain how music worked in his brain, how he saw sound, yes saw sound, like Lego blocks coming together.
I love how he shares his gratitude for each person and opportunity along the way that helped make it all possible. And I love that in the end, no matter what, his makes sure his family comes first.
Buy the book: Amazon CA ~ Amazon COM ~ Kobo ~ Audible ~ Abebooks ~ Alibris ~ Indigo.ca ~ WorldCat
Meet the Author - 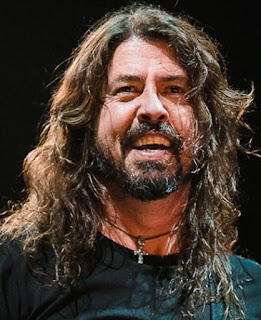 Dave Grohl is a 16-time Grammy-winning musician and 2-time Emmy-winning director. He has been one of the most beloved and respected figures on the international music since his recorded debut with Nirvana on 1991's generation-defining Nevermind. Grohl took center stage with Foo Fighters' 1995 self-titled debut, the first album in massive 12-Grammy-winning catalogue that now includes The Colour & The Shape (1997), There Is Nothing Left To Lose (1999), One By One (2002), In Your Honor (2005), Echoes, Silence, Patience & Grace (2007), Wasting Light (2011), Sonic Highways (2014), Concrete and Gold (2017) and, most recently, Medicine at Midnight (2021).

Grohl has a well-earned reputation as a prolific collaborator: His various endeavors have included "Cut Me Some Slack,” written and recorded with Paul McCartney and Grohl's Nirvana bandmates Krist Novoselic and Pat Smear; Them Crooked Vultures, formed with Led Zeppelin's John Paul Jones and Queens of the Stone Age's Joshua Homme, late legends David Bowie and Lemmy Kilmister of Motorhead, as well as Mick Jagger, Neil Young, Elton John, Nine Inch Nails, Roger Taylor and Brian May of Queen, to name a few.

In 2013, Grohl made his debut as a feature director/producer with the acclaimed documentary Sound City. Named for the Van Nuys CA studio where Nirvana recorded Nevermind in 1991, which would sell more than 30 million copies and transform the modern musical landscape.  He also directed the eight-part HBO docuseries Foo Fighters: Sonic Highways, which premiered in October 2014 and went on to win two of the four Emmys for which it was nominated (outstanding sound mixing for nonfiction programming and outstanding sound editing for nonfiction programming).
autobiography biography book books DaveGrohl Drummer FooFighters memoir Music Nirvana nonfiction rockandroll rockband rockmusic Scream storyteller storytelling tales