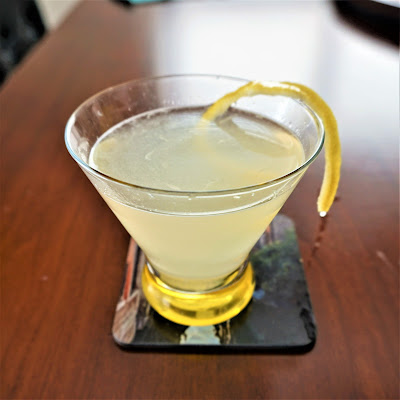 Awhile back I posted a recipe for an Elderflower Mocktail that I really loved. I did feel that it could use some fine tuning, though. Just a bit sweet and missing something.  So of course I sent it off to my son-in-law Alex with a challenge to improve it. AND HE DID.

But first there was the problem of getting him a bottle of the Elderflower Syrup. I had ordered mine on Amazon and received it no problem.  But twice I tried to send him a bottle through Amazon and the boxes were mis-labelled. They had a sticker that said it was Elderflower, but when he took the bottle out of the box, it was Espresso Syrup. TWICE. I emailed the company and they sent them a bottle for free, but by then they had found a local source. So they ended up with 2 bottles. SIGH! 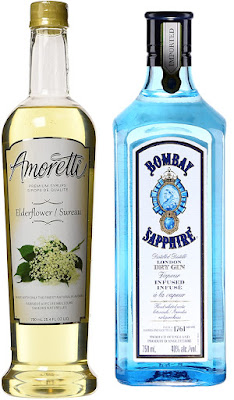 There were two changes he made that really turned this drink from good into something special. He switched out the lemon-lime soda for club soda and he added bitters.  He has a whole selection of them received as gifts for birthday and holidays, so mixed up his new version of the mocktail and split it into several glasses. Then he added a different bitter to each. The winner hands down was King Floyd's Scorched Pear and Ginger Bitters, which made me happy as I gave him it for Christmas.

I had my friend from Toronto coming for a visit, so thought this would be a good chance to try taking this mocktail and turning it into a cocktail - an all in one that would serve drinkers and non-drinkers at a party.  Alex had suggested gin or vodka when I asked his opinion, and my friend Christopher agreed. We were going to try one each way, but the gin stood out from the very first sip.  While vodka would work as well, it is pretty flavorless. The gin added a small flavour note while not distracting at all from the cocktail overall.

I highly suggest you try this recipe both as a mocktail and then as a cocktail. It's great both ways. I know more people who are non-drinkers, taking regular breaks from alcohol or are dieting and trying to cut down on calories. So having a great, unique mocktail is a great idea and this one is fabulous.

Place first 4 ingredients in shaker filled with ice. Shake until chilled. Strain into cocktail glasses, top with a splash of club soda and decorate with a lemon twist or slice.

Place first 5 ingredients in shaker filled with ice. Shake until chilled. Strain into cocktail glasses, top with a splash of club soda and decorate with a lemon twist or slice.