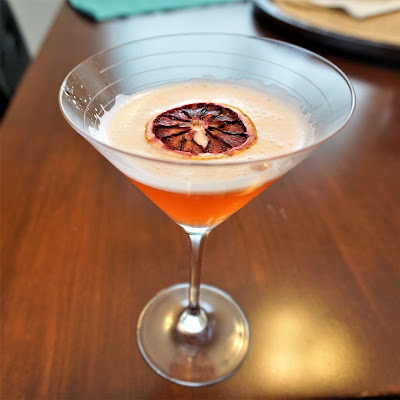 This recipe was sent to me by my son-in-law and I was intrigued. I love sour drinks and had never heard of Aperol or Prosecco Syrup.  Trying something new, not knowing what to expect, is half the fun of making cocktails. Of course it's always best if you end up with a drink you love, but that's not the only goal. Exploration and surprise rate high on my list.

He found this drink on an Instagram site call @aboutdrinksandbars sun by a group called the Cocktail Society.  I checked them out and they have a website full of cocktail recipes at www.cocktail-society.com.  He noted he had made this drink and as he didn't have prosecco, just used simple syrup and it was still great.  As my friend was coming from Toronto, I put it on my list of must makes.

I didn't want to open a whole bottle of more expensive prosecco to make the syrup so bought one of those single serving bottles of dry sparkling wine instead. I have included their photo as it's amazing presentation. Looks like they float a dried orange slice in each.  I had picked a bag up at Modern Bartenders a month ago, so was ready to go. And for anyone who doesn't know, the egg white is what makes that great foam on top. 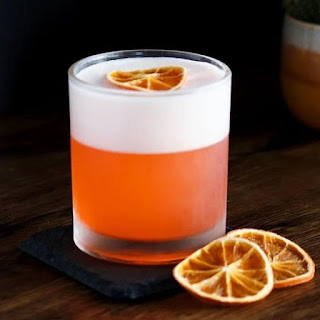 I got lazy and made three at once. Big mistake! While it didn't affect the fabulous taste, it did affect the foam on top. I only had a little instead of a nice layer like in the picture from the bartender who created this recipe.  So next time one or two at a time.  But I made up for the lack of foam by garnishing with a dried orange slice I purchased from the Modern Bartenders.
The taste was an interesting medley or fruit and sour and the color beautiful. When I make this again, I'll get the nice layer of foam on top and take a new picture.
Enjoy!

by @prince_cornerbar
Ingredients -
1.5 Ounces Aperol
0.5 Ounce Gin
0.75 ounce fresh lemon juice
0.05  ounce Prosecco Syrup **see below
Egg white or Vegan Substitute
Instructions -
Place all ingredients in shaker with ice and shake until cold and egg white is foamy. There is a 2nd option and that is to shake without ice first, then add ice to continue. This helps with foaming the egg white. And be careful, it does build up pressure.
Pour into glass and decorate with dried or fresh orange slice, or orange peel.
**This is a sugar syrup made with half prosecco and half sugar. I used an inexpensive sparkling wine that came in a single serve bottle.
aperol aperolsour cocktail cocktailrecipe cocktails drink eggwhite foodie gin lemonjuice makeittonight proseccosyrup recipe recipes YUM