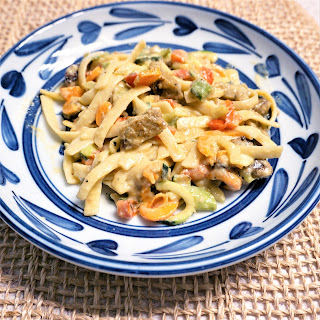 As my daughter-in-law doesn't eat meat, I always keep some plant based options in my freezer to pull out when she comes over for family dinner. However, I like to pull them out for me as well. I used to be a vegetarian years ago and still enjoy mixing in some meatless meals into my weekly menu. Those aren't a fav of my husband so he often microwaves some bacon to eat on the side.
I was feeling the need to try my hand at something from scratch the other day and decided pasta was the easiest.  I have a trick with pasta to bring down the calories a bit and that is to use only half the normal amount of pasta combined with a similar amount spiralized zucchini and carrot.  I just drain the hot pasta on top of the veggies and toss.  I like the extra crunch it adds to the dish. I cooked them a little more here, but just a bit.
For this meal I wanted to also use up some Field Roast Smoked Apple & Sage plant based sausage I had in the freezer. I was curious if this would fill the gap for my husband.  For a sauce I wanted to go simple, so used a trick from a simple Carbonara Recipe I had.  That was to beat an egg into some broth until well blended. The egg helps to thicken the sauce.
What else was in the fridge that needed using up? Some snap peas, a red pepper, some grated parmesan and some green onions.  Voila. The flavor of the sausage I used really popped in this milder dish. So that is one thing you need to be careful about when picking your sausage. It can't be bland. And be aware if you use a different sausage you won't get the same results.  What was best is that Glen really loved the dish just as it was.  I will definitely make it again.
Important to note - there were several ingredients I winged in terms of how much I used.  Others I know exactly what I put in.  The next time I make it I will carefully measure everything, but for now I'll just have to do my best.
Enjoy!
= = = =
Fettuccine with Field Roast Smoked Apple & Sage Plant Based Sausage & Veggies
Ingredients -
1/3                 Package dry Fettuccine noodles (maybe a little more)
2 C                Chicken Broth
1                    Large Egg
1                    Medium Green Zucchini
1                    Medium Carrot
3                    Field Roast Smoked Apple & Sage Plant Based Sausages
1/2                 Large Red Pepper
1/2 C             Snap Peas (roughly)
1/3 - 1/2 C     Grated Parmesan (roughly)
4                    Green Onions
Instructions -
Put a medium pot of water on the stove to boil. When it has come to a full boil, add the fettucine noodles (I break them all into thirds so the dish is easier to eat - sacrilege, I know) and cook according to package instructions, or to your desired doneness. Spray a large non-stick frying pan with pan and set on stove.
While the noodles are cooking, add the egg to the chicken broth and whip with fork until well combined.  Spiralize the zucchini and carrot.  (Note I throw away the zucchini core but sliced the core of the carrot thinly and added to the frying pan). Slice the sausages in half lengthwise and then cross slice into bite size pieces. Dice the red pepper and the snap peas into bite size pieces.  Cross slice green onions.
Add the sausage, the pepper, the snap peas (and if you chopped it, the core of the carrot) and saute over medium heat until just softening.  Add the spiralized noodles and cook for just a minute or two to warm and soften slightly. Drain your fettucine noodles and add to frying pan. Give your egg/broth mixture a good stir, then pour into frying pan.  Stir gently while it heats up as you don't want bits of egg, you only want the egg to thicken the broth just a bit.  The noodles will also cook a bit more and soak up a little broth. Just 2 minutes roughly.
Sprinkle the parmesan in and gently combine until mixed evenly and melted. The very last thing you do is add the green onions and combine. You don't want them to cook.
Divide between plates and serve with alone or with salad and/or bread.  It made 3 servings for me - a large one for Glen, a medium one for me, and enough for one of us for lunch today.  How many it serves depends on if you serve anything with it or if it is an all in one meal, as well as the appetites of those you are feeding.
applesagesausage fettucine foodie makeittonight onepot onepotmeal pasta Pastadish pastarecipe Plantbased plantbasedsausage recipe sausage vegetarian YUM