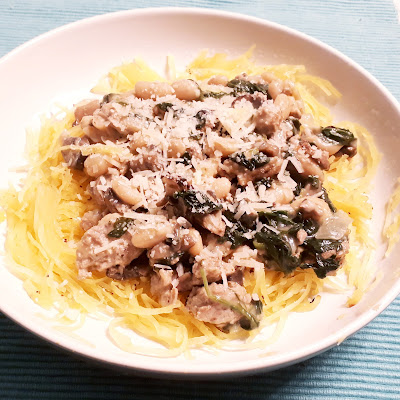 Sometimes I approach dinner from a different place. I don't look for recipes or think of standards I haven't made in awhile. I don't pull out everything that I need to use up and find a way to make it edible. These are the days I am bored.
While I don't have a super refined palette, I do like eating and am drawn to variety. Some days I just need to surprise myself. Last night was one of those nights. I had a spaghetti squash I wanted to use, but needed a new idea that worked with what I had in my pantry.
One recipe I noticed used the squash cut in half, roasted, the insides shredded with a fork, then topped with a vegetarian medley. They served it in the shell. My husband isn't that partial to no meat, and this idea was probably outside his comfort zone, so I decided to start with the recipe's basics, but rework the dish into something he would enjoy as well.
I paired ground turkey with spinach, mushrooms, white kidney beans, mushrooms and parmesan. After baking, I shredded the squash and divided onto the plates, throwing the shells away. I knew my husband would prefer the ease of eating the dish without having to scoop it out of a shell.  A sprinkle of parmesan on top and voila.
When he looked at his plate he was skeptical. However, after the first few bites he admitted it was really good and ate it all up.  A success.  A side bonus for me was the dish had way fewer carbs than it would have had I served the meat mixture on rice or pasta, but the addition of beans still made it a hearty dish for my husband.
As always, don't be afraid to play and make it your own. The original recipe had chopped kale which I love, but that would have required a rush trip to the store.  If you use Kale be aware, it won't shrink as much, so probably you will need to use less. For a meatless version - leave out the ground turkey. The recipe will then proobably only serve two people, so you'll only need one spaghetti squash.
Enjoy!
= = =
Spaghetti Squash w/ Turkey, Beans Spinach, Mushrooms and Parmesan
Serves 4