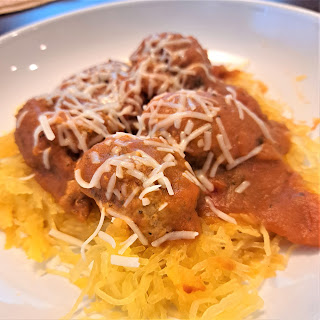 Occasionally in the afternoon, I take a break in front of the TV for a a bit - sort of a mind cleanse. Usually I channel surf around to see what's interesting and fits in my shorter time frame. Often I settle on a home reno show to get ideas, or a cooking show where new recipes or techniques I didn't know are presented. If something pops for me, I'll watch a bit. If nothing does, I'll move on.
Today I caught a small segment of a show called The Kitchen on The Food Network. While not my fav cooking show, I had watched it a few times and found their format interesting. They have several segments, a daily focus, and each chef makes a different recipe. When I popped in today, nutritionist expert Joy Bauer was a guest. For her segment she offered the recipe below, which is unique to say the least.

This was billed as autumn comfort food. The addition of pumpkin, sage and cinnamon definitely gave the dish fall vibes. While I was initially skeptical, I noticed the surprise reaction of the judges. I don't think they expected to like it, so reacted when they did. Then she dropped the clincher - it was roughly 200 calories a serving. Okay, maybe it was worth a try.

The meatballs and the sauce were easy to mix up. However, without bread crumbs the meatballs were super soft. I could get them in balls and on the parchment paper okay, but they didn't keep their shape and spread out a bit while baking. I am okay with odd shaped meatballs, but I know not everyone is. Her unique technique for preparing the spaghetti squash dealt with my number one complaint - it's hard to cut open when raw. Cooking a few minutes in the microwave before cutting open made the squash much easier to split in two.
Was this a hit? Yes.  My husband is a meat man. He prefers beef, pork, lamb and ham.  He eats chicken but prefers the fattier dark meat - thighs in particular.  This was made with very lean ground turkey breast.  When he said good it tasted I was shocked.
While not my number one top meatball and sauce recipe, I did enjoy it too, and will be making it again.  Good flavor, filling, no carbs and low calorie. This is a home run for me.
= = = =
Pumpkin Meatballs with Cinnamon-Sage Tomato Sauce
Food Network - Recipe courtesy of Joy Bauer
6 servings, 200 calories per serving.

Form the turkey mixture into evenly sized (approximately 1.5-inch) meatballs. You should end up with about 22 in total. Note: If they're fussy, you can smooth them into a rounded shape once they're on the baking sheet.

Bake the meatballs for 15 minutes on one side. Carefully turn them over and bake for an additional 15 minutes. Add the meatballs to a pot of simmering Cinnamon-Sage Tomato Sauce. Cover and simmer for another 10 to 15 minutes, allowing the meatballs to soak up the yummy sauce flavor. Serve with the Spaghetti Squash "Pasta."

Cinnamon-Sage Tomato Sauce -
Add the broth, tomato sauce, pumpkin puree, basil, garlic powder, cinnamon and sage to a large pot and mix well. Bring to a boil, reduce the heat and simmer, uncovered, for 15 minutes. Season with salt and pepper to taste. Sprinkle on some crushed red pepper to kick up the heat if desired.

Spaghetti Squash Pasta -
Microwave the spaghetti squash to soften slightly, about 4 minutes.
Slice off the ends of the squash, then slice in half lengthwise. Scoop out the seeds and pulp. Place the squash cut-side down in a baking dish with an inch of water. Microwave for 9 to 10 minutes. Once cool, use a fork to scrape out spaghetti-like strands.
cinnamon fallmeatballs fallrecipe foodie makeittonight meatball pasta pumpkin pumpkinmeatballs recipe recipes sage spaghetti spaghettisquash tomatosauce YUM