Stolen Focus: Why You Can't Pay Attention--and How to Think Deeply by Johann Hari 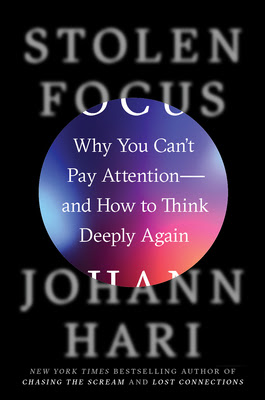 Our ability to pay attention is collapsing.
Synopsis -

In the United States, teenagers can focus on one task for only sixty-five seconds at a time, and office workers average only three minutes. Like so many of us, Johann Hari was finding that constantly switching from device to device and tab to tab was a diminishing and depressing way to live. He tried all sorts of self-help solutions—even abandoning his phone for three months—but nothing seemed to work. So Hari went on an epic journey across the world to interview the leading experts on human attention—and he discovered that everything we think we know about this crisis is wrong.

We think our inability to focus is a personal failure to exert enough willpower over our devices. The truth is even more disturbing: our focus has been stolen by powerful external forces that have left us uniquely vulnerable to corporations determined to raid our attention for profit. Hari found that there are twelve deep causes of this crisis, from the decline of mind-wandering to rising pollution, all of which have robbed some of our attention. In Stolen Focus, he introduces readers to Silicon Valley dissidents who learned to hack human attention, and veterinarians who diagnose dogs with ADHD. He explores a favela in Rio de Janeiro where everyone lost their attention in a particularly surreal way, and an office in New Zealand that discovered a remarkable technique to restore workers’ productivity.

Crucially, Hari learned how we can reclaim our focus—as individuals, and as a society—if we are determined to fight for it. Stolen Focus will transform the debate about attention and finally show us how to get it back.

After reading Stolen Focus, I have come to feel this should be required reading in high school and university. In fact, I think everyone should be aware of the ideas that have arisen from the extensive research into focus presented in this book, but our young people are the most vulnerable. They have grown up surrounded by digital algorithms that exert influence every moment of their day.
The book itself has two distinct parts. The first explores what focus is, how it has deteriorated, and some of the whys - increasing speed of life, an over glut of information coming at us, the lure of distractions, and constant interruptions. The second part focuses in on environmental, dietary and stress factors that affect our ability to focus, and how they affect the rising numbers of children (and adults) diagnosed with ADHD.
Towards the end he mentions something I've had on my mind for years - the push to define our economies in terms of economic growth. I too believe chasing this goal pushes us to lose ourselves and our lives in pursuit of wealth at the loss of other parts of our lives.  I found myself in total agreement with the concept of moving to something called a steady-state economy.
A must read that will both disturb and enlighten. There are no easy answers.
Buy the book:   Amazon US ~ Amazon CA ~ Apple Books ~ Kobo ~ Audible ~ Barnes&Noble ~ Abebooks
Meet the author - 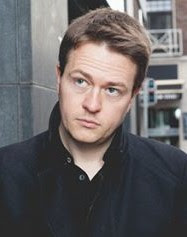 Johann Hari is the author of three New York Times best-selling books, and the Executive Producer of an Oscar-nominated movie and an eight-part TV series starring Samuel L. Jackson. His books have been translated into 38 languages, and been praised by a broad range of people, from Oprah to Noam Chomsky, from Elton John to Naomi Klein.
Johann was born in Glasgow, Scotland, and when he was a year old, his family moved to London, where he grew up and where he has lived for most of his life. His father – a Swiss immigrant – was a bus driver, and his mother was a nurse and later worked in shelters for survivors of domestic violence. He studied Social and Political Science at King’s College, Cambridge, and graduated with a Double First.
He has written over the past decade for some of the world’s leading newspapers and magazines, including the New York Times, the Los Angeles Times, the Guardian, the Spectator, Le Monde Diplomatique, the Sydney Morning Herald, and Politico. He has appeared on NPR’s All Thing Considered, HBO’s Realtime With Bill Maher, The Joe Rogan Podcast, the BBC’s Question Time, and many other popular shows.
Johann was twice named ‘National Newspaper Journalist of the Year’ by Amnesty International. He has also been named ‘Cultural Commentator of the Year’ and ‘Environmental Commentator of the Year’ at the Comment Awards. His TED talks have been viewed more than 80 million times.

He lives half the year in London, and spends the other half of the year traveling to research his books.