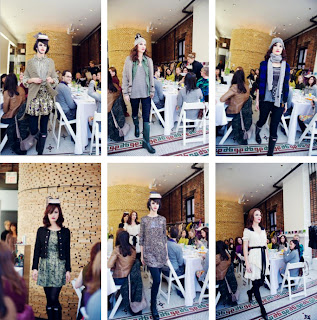 I had the distinct pleasure of attending a beautiful media brunch at the LYNNsteven Boutique in Gastown (www.lynnsteven.com).  Owner Nicole along with publicist Kristin brought together individuals representing a wide range of Vancouver media for an intimate affair that included a catered lunch, music by a live harpist and a small fashion show.  It was truly fabulous.  On the way out the door I was handed several gifts, but the one that caught my attention was a Libre Tea To Go.

What an amazing concept and how did I not hear of it before?  It's like a coffee travel mug, but for loose leaf tea.  With tea coming into it's own as a gourmet beverage, I think this will quickly become the hot, must-have item for many as well as high on the list of gifts to give this coming Christmas season.  The photo to the left doesn't do it justice.  It is about 18.75 cm tall and 6.25 cm in diameter - just the right size for my hand.  There is a double lid plus a fine mesh screen.  You take all three off to add the tea leaves and boiling water.  When you take off just the first lid and tip it to your lips, the liquid flows through the fine screen first so what you drink is just beautifully brewed tea. It's also in line with the movement to reduce our eco footprint as it removes the need for the tea bag.  Other selling points?  The flavour is better as tea bags are usually made with loose tea's "fannings" or dust.  It's also less expensive as loose tea is sold by weight. 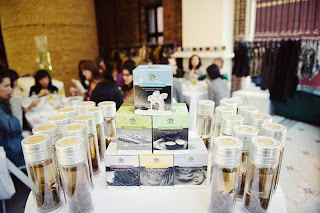 -Tea was accidentally invented in 2737 BC when Chinese Emperor Shen Nung spotted some tea leaves blew into a pot of boiling water and produced a pleasing aroma.

-At the 1904 World's Fair, held in St. Louis during a heat wave, Richard Blechyden, an enterprising Englishman who had the tea concession for the event, cooled his hot tea down and served it "Iced" for the very first time.

-There are four main types of tea - white, green, oolong, and black - all of which comes from the same plant, Camellia Sinensis.

-From 1608, when tea first appeared in Europe, in Holland, until around 1850, China, with rare and inconsequential exceptions, was the sole source of all the tea drunk in the Western World.

-Tea will absorb odours around it. Here is a tip for removing food odors from your hands. Pour some tea over your hands and the tea will remove all odors from your fingers, and leave them smelling great. It even works great with fish odors!

-The costliest teabag ever was created for the 75'th anniversary of the PG TIPS tea company. The bag was filled with two hundred and eighty diamonds and expensive limited edition tea leaves. The bag cost 7,500 pounds and would be auctioned to raise money for a Children's hospital in Britain.

-To cure puffy eyes lie in a horizontal position and place either a moist teabag or tea compress over both eyes and leave for about 20 minutes. The swelling around the eyes will to your amazement disappear and your eyes will return to their former glory.

And, of course, I want to leave you with a smile.  I couldn't find any actual tea jokes, but here is a cartoon. Enjoy!