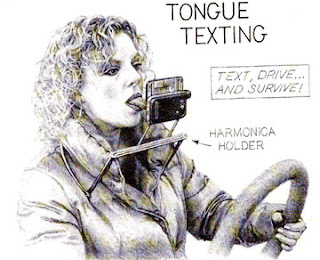 I'm sure you've all noticed it - Smart Phone Addiction!   There are so many examples that it's hard to pick which to share, but the trend is definitely on the rise.  I always wonder if those in it's grip know they have a problem and whether there will be a 12-step program coming out to deal with the addicts. If so, the first step would surely be admitting they have no control over how much they use it.  One article I found on the internet listed some symptoms - increasing dependence on your cell phone, having an emotional need to stay connected with your friends at all times and gadget lust.  I think it's simpler to just ask yourself the following two questions.  First, how much time you spend on your smart phone every day?  They use this same question when it comes to TV watching and time on the computer.  The second and I think more important question to ask yourself is whether you feel the need to respond to every text, twitter, email or Facebook posting as soon as it comes in. If it's yes, then you need to give it some thought. 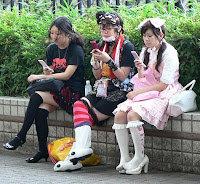 Social Media has let us become connected in new ways, but is also isolating us in the physical sense.  We sit with friends and respond to text and twitters from others who are not there instead of being fully in the moment.  I have a couple of examples of this.  First I was at a restaurant celebrating someone's birthday.  Everything was great for a bit and then the person across from me starting doing what my husband calls The Blackberry Prayer - head down, fingers tapping away.  When I asked what she was doing, she responded that she was answering her friends texts and twitters because they'd be upset if she didn't respond right away.  SIGH!!!!  Several times I have been talking in a classroom when I see the obvious hunch and finger twiddling.  When I ask the student to stop, the look on their face of utter surprise that anyone knew was priceless.  Somehow they thought they are doing it slyly and that no one can tell.  Last, but not least, I was at a runway show for Christopher Bates Ultra menswear collection.  The guy next to me, who supposedly wanted to be there to see the launch, spent most of the show texting on his phone while looking down.  Unless he had a spy camera somewhere with a feed to his cell display, I don't think he saw a thing.  I have seen lots of photos and examples of people on their smart phones during runway shows, but a word of caution - you can't make assumptions as some writers use them to take show notes.  I just hope they look up often enough to see the flow of the collection. 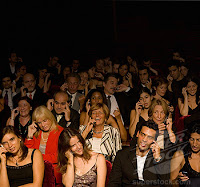 Most of it is just sad, but sometimes it's annoying.  Have you ever been on the bus, in the mall or some other public location when the person on their cell clearly thought they were in the Cone of Silence.  I have heard fights with boy/girl friends, talk about private business matters and more.  If we were in the same house on a land line and I picked up the extension to listen in, can you imagine how insulted they would be?  And yet here they are with sometimes ten or more of us listening into what is sometimes a very personal discussion without a thought.  Then there is the person in front of you in line at a bank, grocery store or other business that decides to make a phone call just as they get to the front.  They are yakking away while the clerk tries to help them, slowing everything down and making sure all of those behind them can hear their personal business.  Only once did I try and use my cell phone while filling up at a gas station.  I thought while I was setting there I could get a call or two in.  The attendant clearly informed me that was not proper and asked me to hang up.  I did it promptly and never used my phone in that situation again. Last to mention is that the medical community is actually starting to gear up for a wave of new injuries from over-texting.  While the phenomenon is too new to see where it is going yet, they expect to see a rise of overuse injuries similar to those in the workplace.  Someone has even given it a name, Tech-nitis.  The expectation is that there will be increasing cases of tendonitis in the hands and wrists as well as pain in the neck and shoulders area from the hunched position most are in when texting.  The solution - less time on your smart phone and regular breaks where you get up, move around and stretch.

I have no illusion that this is going to be an easy trend to keep in check, but the same problems were faced when radio came out, then television and the computer.  Then there was all the publicity about the compulsive nature of games such as World of Warcraft.  Each new technology had it's day of being addictive to someone. All you can do is be responsible for yourself.  I am going to end with a couple of quotes and a cell phone story shared by someone on the internet that I thought was hilarious.

Today is life - the only life you are sure of. Make the most of today. Dale Carnegie

Live like there's no tomorrow. (looking for author - lots of controversy)

Leaving Minnesota for Colorado, I decide to make a stop at one of those rest areas on the side of the road. I go in the washroom. The first stall was taken so I went in the second stall. I just sat down when I hear a voice from the next stall...
- "Hi there, how is it going?"
Okay, I am not the type to strike conversations with strangers in washrooms on the side of the road. I didn't know what to say so finally I say:
- "Not bad..."
Then the voice says:
- "So, what are you doing?"
I am starting to find that a bit weird, but I say:
- "Well, I'm going back to Colorado..."
Then I hear the person say all flustered:
- "Look I'll call you back, every time I ask you a question this idiot in the next stall keeps answering me."
cell phone injuries Other symptioms tech-nitis text texting