Thank God for the Mini-Vacation 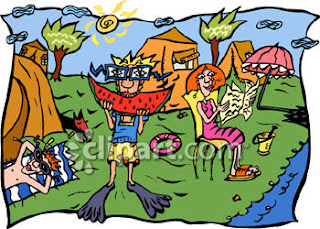 When our kids were young, there was very little money for family vacations, so we made do with a once a year camping trip to Tuc-El-Nuit Lake in Oliver, British Columbia.  Here 100 families and 300 kids would have their tents and trailors parked in pretty close proximity - no secrets possible.

Parents would lounge around, read, go on wine tastings and relax while the kids ran wild in a big pack and swam in the lake.  Every night, no matter how hot, campfires would be lit on the beach and the kids would roast marshmellows for smores. One year the fire department even brought a large firetruck on site and let all the kids climb in the cab and set off the siren.

When our three hit the Tween years, we began to spend a little more on holidays and wandered further afield. Vacations included two trips to the farm in South Dakota for the Fourth of July, a trip to Yosemite to see the geysers and a cabin on Vancouver Island where we dug up Geoduck clams when the tide was out.  Then life got crazy and the yearly vacation had to be spent close to home.  One I remember we tried to make special by calling it "Vacation in Vancouver."  The family spent a whole week going to everything tourists might see - a real eye opener.  My favourite was a tour of Gastown.  We had an amazing tour guide who really opened my eyes to Vancouver's interesting history. 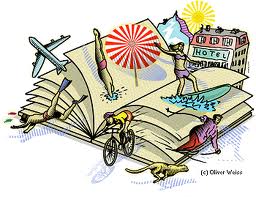 Finally the day came when Glen and I began to vacation on our own.  Our budget was still not huge, but we could do so much more when only two were travelling on a budget normally stretched to include five.  While having a couple weeks away was amazing, and flying first class (thank god for air miles) to Cozumel is something I will never forget, I have learned to really enjoy the mini-vacation.

Here you take 4-5 days over a weekend so you don't miss more than 2 days of work and go somewhere - a break (or hopefully several breaks) in-between the yearly trip to keep your batteries charged.  If you are visiting friends or family and don't have to pay for lodging, then you can spend your money on discount plane flights.  If off to explore on your own, then driving becomes the norm and money is spent on creature comforts like a really nice hotel room.

Last year, in addition to our "REAL" vacation, we managed several shorter trips.  What a difference it made! Adding in a few smaller trips has an effect far larger than the short time you are actually away. In addition to our regular vacation, Glen and I managed four mini trips together and an additional one on our own.  If you add up all the days we were gone over the year, it still probably comes to be just 3 weeks holiday. 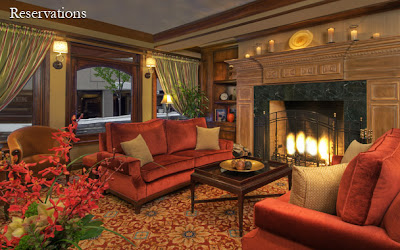 My favourite this year was a short trip to Seattle after Christmas.  We stayed in the beautiful Vintage Park Hotel, right down town so the car could be handed to the valet on arrival and never see it again until it was time to leave.  A few extra dollars insured we had a room on the top floor with a nice seating area to relax in.  The hotel lobby offered free coffee in the morning, hot chocolate in the afternoon and a complimentary wine tasting pre-dinner.  Everything was within ten to twelve blocks of the hotel so we could wander at will.  Fortunately the weather was good.


Walking around downtown is a visual delight that includes many examples of well-preserved, texturally detailed heritage buildings in a variety of  styles, the bold and somewhat controversial Seattle Library (voted the American Institute of Architects’ list of Americans’ 150 favorite structures in the US in 2007) and very modern business towers and hotels.  I intend to head back solo when the weather is great to spend a few days wandering the streets with my camera.

Two areas that visitors are drawn to are Pioneer Square and Pike Place Market.  Pioneer Square is reminiscent of Gastown in Vancouver and the underground city tour can be found here.  Pike Place Market is an enormous old market with stores that cascade down a hillside, ending at the waterfront.  As I used to live there, I wanted to visit some of my old haunts.  Imagine my surprise to find the Copa Cobana eatery still open, a place I took Glen when we were first dating many years ago.  And at the bottom of the hill you still find the 10,000 sq. ft. Antique Warehouse I used to wander through, l think owned by the same person.  Glen bought three science fiction magazines published in 1966 that include early short stories by authors he reads today.

Last of all was the 5th Avenue Theatre.  We noticed it near our hotel and were intrigued﻿ to see they had a comedy available, a wild muscial stage version of A Christmas Story - "You'll put your eye out!"  Great seats were still available, so we only had to walk a few blocks from the hotel to enjoy this evening out.  The theatre is unbelievably ornate inside.  Built in 1926 and renovated in the 1980's, the interior is modeled to reproduce some of the features of historic and well-known Beijing landmarks.

Norwegian artist Gustav Liljestrom executed the designs based on his visit to China, and on Chinesische Architecktur.  Pre-show we spent looking at all the amazing intricate design work.  The musical was a first class: production, cast, musicality, staging, set and costumes.  It was a great way to spend our last evening.  The next morning we met a few friends for breakfast at a French/NewOrelans bistro, and then it was back to Vancouver feeling relaxed and happy. 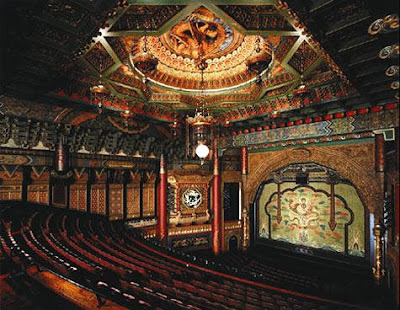 Next in the planning stages is our yearly holiday, several weeks somewhere we have never travelled before. But in the back of my mind, I'm still planning that next mini-vacation.  The list of where we would like to go just keeps getting longer and as our travel budget increases, so do the opportunites.
5th avenue theatre antique warehouse camping copa cobana mini pike place pioneer square Seattle traval travel underground tour vacation vintage park hotel