on October 17, 2011
When I first ran across London Alexander's name last spring, he was only in his first year of the fashion program at Vancouver Community College.  So often I run into artists with amazing talent, but no business acumen. He was the exception.  Despite being a student, he had already established a brand name - LRMA Clothing, created a sharp website with proper photography and his first mini-collection of menswear was market-ready.


In April 2011, Fame'd Magazine (formerly Vancouver Fashion eZine) was wrapping up the student incentive sales at five local fashion programs.  Those who sold at least ten copies to benefit their school were in the process of sending in their 150 word bio that would be published in our May online.  Alexander was one.  I always read every bio and happened to note he listed a website at the end of his.  A quick click took me there and what I saw was impressive.  The website was professional looking and though that initial collection was fairly small, it was solid. He had caught my attention, but I carefully tucked this information into my watch folder without another thought as he was only a student.

Shortly after this, Brandon Hamilton and I decided to run a charity event in May to help more local athletes participate in the Vancouver Out Games.  We were struggling to come up with a menswear designer to show a few fashions when I remembered Alexander.  Would he be interested?  The answer was yes and he rose to the occasion, providing his own models, hair and make-up and even donating a few t-shirts from his collection to the charity raffle.  As far as I was concerned that was game, set and match.  I put his name forward to the Creative Director and approval was quickly given.  The article on LRMA Clothing appeared in our July 2011 edition - in fact he was our lead article.  An amazing photo shoot by photographer Mike Chatwin with styling by Paulo Vallejo and Hair/Make-up by Maryann Richardson propelled this story into a six page spread in our September 2011 print edition.  My only regret?  I didn't get to do the interview personally.

The next time I saw Alexander, it was six months later at Eco Fashion Week. I was delighted to see a larger selection of menswear all beautifully detailed.  Offered up to the well-heeled audience was a wide variety of very wearable separates - some definitely day time, some with the potential to move into a summer evening.  Every garment was immaculate in construction.  Seams laid flat, welt pockets were flawless and the proportions bang on.  I was again impressed and I was not alone.  Comments in support could be heard all around me - "I/my husband/my boyfriend would wear that!"  As someone who sees a lot of fashion shows, I often prefer to see unusual garments that push the envelope, but a line like LRMA's is the exception.  When a collection of classic, wearable pieces is done right, they truly stand out from the crowd. To appreciate these garments fully,  you need to get up close and personal as there is a lot of fine detailing that gives a uniqueness to each.  The enthusiasm of those around me was palpable. I can only assume his booth at the show saw a lot of action. 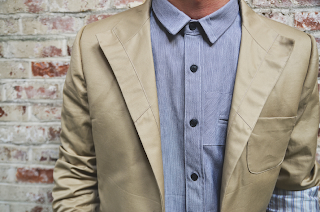 I am often asked how to catch media attention and here is just one small example.  London Alexander took what was a chance to get 150 word bio in our magazine by selling 10 magazines, put up a first rate web site, stepped up to the plate when asked to participate in a fashion show and ended up being the lead article in our July issue - all while still continuing his studies at VCC.  What I hope others get from this is that you never know where or when that door of opportunity will open, but you have to be ready to run through it prepared to knock everyone's socks off.  Kudos to Alexander for all he has accomplished in a short time and I know I'll be seeing a lot more of him.  Next time I get to the do interview!

To read the VFE July 2011 article go to http://vancouverfashionezine.com/fashionstory.php?issue=2011_07&story=lrma-clothing&category=cover