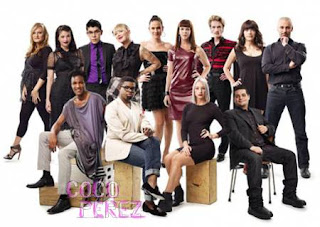 I designed and produced and dance costumes for 5 years - over 200 per year, all custom fit. It's a crazy industry where all the costume orders come in over a fairly short period of time and are due within a very short period of time.  Your ability to earn money is linked to the amount of orders you accept.  Stressful to say the least.  This is probably one of the reasons I have always been addicted to Project Runway.  The pressure they are under rings a bell with me and I am always intrigued by their unique response to the challenges.  What is really interesting is that I sometimes love their challenge garments more than the line they have the freedom to create for the runway finale show.  The designers that exceed expectations in the fnale are the ones I keep an eye on.

Last season I found my interest waning. The challenges and garments produced didn't inspire me the same way, so it was with interest I began to watch the newest offering - Project Runway All-Stars. Gone are Tim and Heidi and a new group of unknowns.  In it's place are a cast of former contestants and a new judging panel, host and mentor.  The stakes are very high - the largest prize to date.  It includes an exclusive designer's boutique in select Neiman Marcus stores and on www.NeimanMarucs.com, $100,000 in office space and technology, $100,000 from L'Oreal Paris, a feature spread in Marie Claire, a year as guest editor at Marie Claire and a sewing and embroidery studio provided by Brothers International.  Amazing!

Some of these choices I applaud, others leave me scratching my head.  As always, the selection is based on some strong talent as well as what will make for an interesting show.  I enjoy the change of judges this season as they offer a different perspective - Isaac Mizrahi and Georgina Chapman.  Mentor Marie Claire Editor-in-Chief Joanna Coles comes across very professionally, but if you listen to her feedback it's sparse on actual advice.  So far it consists pretty much of just how are they going to wow the judges.  Hopefully she gets her feet under her and begins to give them more thoughtful guidance.  The only real shortcoming so far is  host, supermodel Angela Linvall.  She is both a lovely person and very beautiful so it's hard to give her a negative comment, but her speaking voice and delivery is very bland and monotone.  Unfortunately this will probably have a huge impact on the ratings.


For the first episode the designers were required to show a look that encompassed their aesthetic. Then later in the show they had to create an a garment from the unconventional materials found at a 99 cent store inspired by that look.  In the past the designers have been chastised for using material too much like fabric.  Not so this season.  Some looks really stepped to the forefront.  Others didn't inspire. The first set of photos here are my favourites from this show. 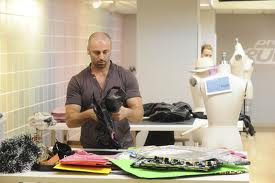 TOP FOUR - Rami (left) was the winner.  He was amazing before and is amazing still.  Kenley (2nd from left) never really clicked with me in the original show, but it looks like her aesthetic has grown up and become more polished.  This garment stood out as clean and unique. Mondo (2nd from right) continues to bring his own point of view and his garments are always beautifully made. I always liked Jerrell (far right) as well and his garment was a hit.

MIDDLE - These 3 caught the judges eye and I felt they ranked in the middle. April and Michael (right and left photos) both did well in their original shows although they tended to be hit or miss at times.  For some really weird reason, they both ended up walking out of the store with mop heads.  While Michael was concerned, April just brushed it off.  She seems to have a little more confidence as a designer and I think while they are both interesting, April's silhouette is more flattering.  The garment by Kara (middle) was not a show-stopper, but easily moved her to the next round.

NOT MY FAV's - These garments are by designers I think are capable of much better. They just didn't do it for me. Austin (left) is known for his couture abilities, but I just don't think this plastic offering including the weird poufs at the hips is flattering. I do love the fact he used colour.  Mila (middle) often employs colour blocking and geometric shapes.  Usually she pulls it off, but this one doesn't work for me on many levels. A cut-away shoulder might have balanced it better, but wouldn't have solved all the issues.  At the same time I applaud her for being true to her unique point of view.  Gordana's offering (right) I believe was made from crepe paper strips which had a nice flutter as it moved down the runway, but it really does look like a ball of fluff overall.


BOTTOM - There are 3 I banished to this category.  Sweet P (left) never really hit the mark for me as a designer.  She is obviously on the show to provide a different point of view, but it is so far away from the aesthetic the judges like it is bound to be a rough ride for her.  This offering is made from terry towels and really looked like something from K-mart. Anthony (middle) is someone you just can't help  but like.  On the other hand I always found his designs ranged from pleasing to cheesy. This one has a great colour, but the bunching on the abdomen, the very short length and the unfortunate choice of gold tinsel as decoration put it squarely in the bottom for me. Elisa (right) of mark the fabric with spit fame created the garment on the right. She was also the one sent home.  I have to admit, I find the picture interesting although not the kind of fashion I am drawn to.  It is hand painted and the wording around the cape tells a story.  To be honest, she is really too new age for this show and I suspect was chosen only to add interest to the mix.

For more information on this new offering go to http://www.mylifetime.com/shows/project-runway-all-stars.  I will be writing up episode 2 shortly - A Night At The Opera. In the meantime, below is a block of photos showing all garments in one place for you to enjoy. 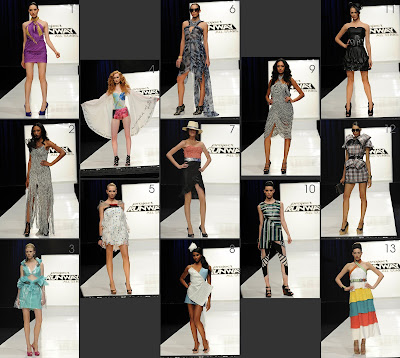