on February 11, 2012
Sick or not, I was determined to get out for my 2 hour city stroll on this last day and it was worth it.  The sun was shining, the weather had climbed to a balmy 2 degrees C and there were new directions to explore.  I've said it before and I have to say it again, I seriously love the architecture in this city and took many more snapshots of what I saw.   I put extra photos at the bottom of the blog for those who are interested.

Today I headed behind the Bonsecours Market.  Like Gastown, Old Montreal is beside water - for them the St. Lawrence River. Everything is so close within this area of town it is hard to get photos of the larger buildings. I could finally get photos from the back of the Bonsecours that allow you to see how large it is as well as  that of a very old church close by - the Notre Dame de Bon Secours Chapel - that is so tucked in to the surrounding buildings at the front that the photo I took of this church before really wasn't very good.

Turning towards the river I was treated to an amazing outdoor ice rink, the Patinois de Quays, with 2 skating areas:  the main oval and a side c-shaped rink.  A skate rental shop, small cafe and sound system to provide music were a part of the complex.  No one was inside except to put on skates as the day was so beautiful.  It was obviously a popular place to hang out. Even though this was a workday morning, there were a lot of people both on and off the ice - many more than the photos indicate. A sign at the entrance advertised musical theme evenings offered as well.  Sorry I didn't have time to come back at night and check it out. 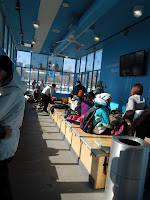 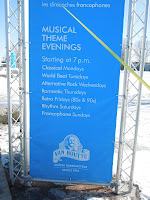 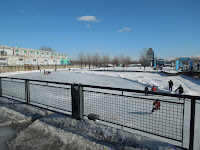 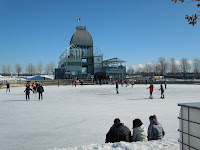 Behind the rink complex was a walkway along the St. Lawrence River.    Most of the sidewalks were 1/2:" deep in ice which my snow boots seemed to slip and slid on.  The locals had no such problem and strolled along gracefully.  I even had a jogger in tennis shoes and running gear blow by me in perfect balance.  Stepping off the path into the snow seemed a good idea, but ended up way too tiring as the top of the snow was 1/4" of ice with soft snow underneath - uneven and laborious to walk through.  I finally moved onto an actual road which was completely clear.  Photos below show the iced sidewalk as well as a weird sculpture in the park surround by one of those awful orange fences. 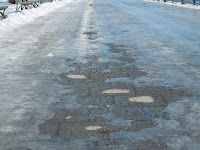 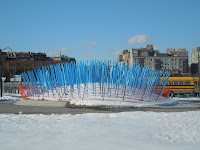 Next it was back to further explore Old Montreal.  While there are similarities with Vancouver's Gastown, it is 4 or 5 times larger with a wider variety of architectural styles.  On my first quick walk through this area I found some of the signs hanging off the buildings a little tacky. This time I was able to explore further and found there was truly a wider variety than I noticed that first time and many were works of art.  I also saw several horse drawn carriages working their way through the streets diligently looking for fares 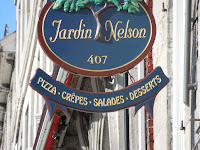 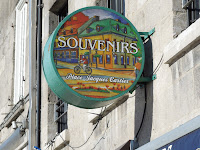 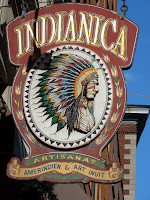 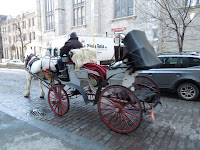 Across the street from the Bonsecours was the address of the hotel I had hoped to stay at - the Auberge Bonsecours.  How convenient it would have been just to walk out one door and into another.  On my first walk through this area I didn't see it, so this time looked more closely.  There was a tiny sign on the wall next to this deep alley/driveway between 2 businesses and there it was tucked at the back. Turns out it is a bed and breakfast with just 7 rooms.  Unfortunately it was closed until March 15th.  Maybe the next time I am here I can try it out. 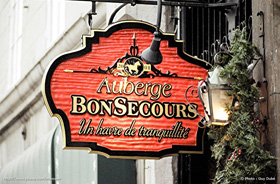 Walking along I noticed an alley with a large sign over it proclaiming Rue Des Artists, but found it to be just a pretty junky alley.  There was one door proclaiming an artist' market. Perhaps during the tourist season this tours into something more vibrant and inviting.  But in November, not much to see. 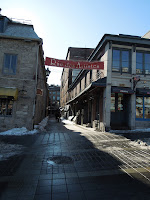 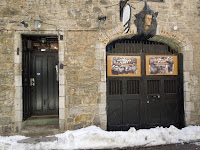 Here is an example of just one of the unique shops in this area.  I loved the automated Xmas display still showing in the window.  The elf on the beater was traveling around the bowl. 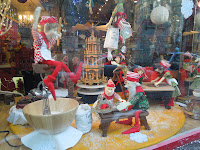 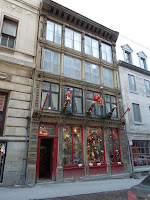 Last but not least, my husband had encouraged me to visit the Notre Dame Cathedral and go inside.  I refused to take a taxi and didn't think about it again.  This was my time to wander the city on foot and I saw many, many beautiful old churches.  So imagine my surprise when I found myself on the steps of this famous building.  It was $5 to go inside and look around and well worth it.  I have never seen anything so ornate and the artwork, carvings and stained glass windows were amazing.  Unfortunately the next English language tour was too late for me, so I had to give it a pass.  Because it was both large and fairly dim, photography on a small point and shoot was tough.  These were taken with the night setting, but still not great examples of the colours in particular. 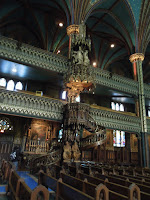 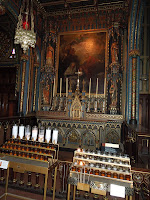 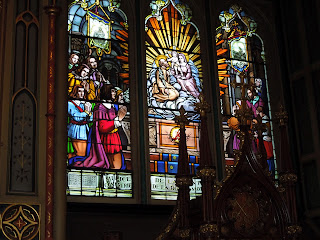 These two photos were taken in another part of the building.  This smaller, but still very ornate chapel is called the Chapelle Notre-Dame-Du-Sacre-Coeur. 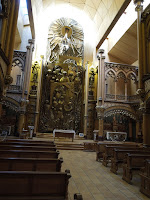 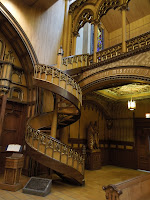 That's it other than a brief mention of the difficulties of getting from the hotel to the venue and back on foot.  I booked a hotel close by so I could walk.  It was only 4 blocks away. While most of the sidewalks were clear there was a truly treacherous patch right in front of Bonsecours that many of us struggled with even in flats.  Twice I was saved by the arm of a gallant young man - once photographer Peter Jensen.  The other problem was the cobblestone streets.  The stones were place an inch a part in places and were very uneven.  As well, the space between them sometimes had ruts up to an inch deep.  Even with a wider middle height boot on, I found my balance precarious.  After 4 days though, you do seem to get a knack.

In closing I want to leave you with the other photos I took of architecture that day.  Just a random grouping of photos. 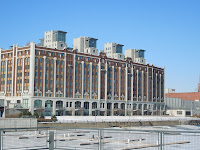 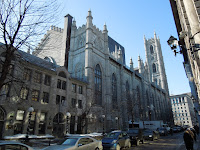 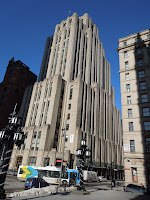 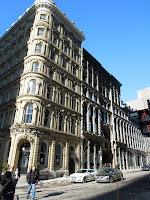 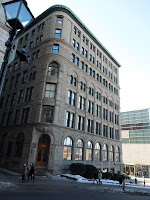 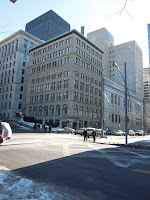 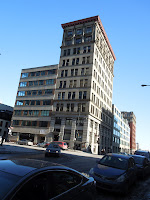