Montreal Fashion Week the Prelude OR Montreal or Bust!

Out of the blue I realized I had not had a real holiday in over 2 years and hadn't been away alone other than to visit family in many, many more.  Getting married and raising kids will do that to you because what money there is goes to the family holiday. I was okay with that until the kids were grown.  Suddenly it hit me - I needed to get away on a solo adventure.  Something not too expensive that had a twist.

After checking my air miles I realized I could get a plane ticket to Montreal to attend their fashion week.  I am editor for 2 fashion magazines, so that gets me into most shows and there was a hotel only 400 meters from the venue in the historic Old Montreal section of the city so I could save on taxis and foot it.  Shows don't start until late afternoon, so I could have all morning and part of the afternoon to explore. There was also a contingent of 6 local design students going back for the Telio Competition which is a part of this event, another who won the competition that would be part of an exhibition and a local designer - Abol - presenting.  Even one of my photographers was going to be there shooting.  Sold.  I booked my plane and hotel and registered for my media pass.  Early hours would be mine, mid afternoon on would be spent at shows and socializing. 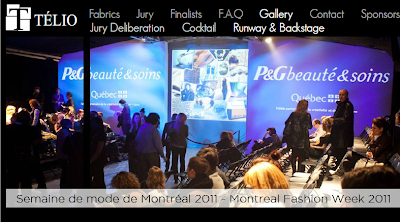 Saturday morning I woke up at 4 a.m. thinking about all that I had to accomplish to get on that plane Sunday morning.  There was a lot.  I bet I spent at least 4 hours running errands and another 4-5 hours on the computer taking care of emails for Fame'd Magazine.  By 9 p.m. I was finished and crashed in front of the TV for a wind down.  6 a.m. sharp this morning I was up to pack the last minute things and hit the road. This is the moment  Murphy's Law - "A humours axiom stating anything that can go wrong will go wrong." - decided to drop by for an unwelcome visit.  Fortunately my husband walked in with me to say good-bye as I was informed my 8 a.m. departure was cancelled - no plane.

After searching the entire schedule, my only option was to go home and return for a 4 p.m. flight.  Instead of arriving at 5:30 p.m. and having a leisurely evening to settle in and unwind, I will now arrive at midnight and get to the hotel around 1 a.m.  As the time difference is 3 hours, I won't have any problems with being over tired tonight.  The problem will be getting up in the morning in time to enjoy exploring a bit that first day.  My husband travels frequently with work and has for many years.  In all that time he doesn't remember every having a flight totally cancelled.  Delayed yes - totally taken off the books no.  You have to laugh because the alternative is total frustration. So here I am.  I was going to write this blog when I arrived at the hotel tonight -  a rehash of my day of travels, checking into the hotel and hopefully that first small walk around this historic area.  Instead I am sitting at my normal computer in my own living room as the clock ticks slowly, recounting the unusual twist the day has taken.

As with all events, there are a few upsides to what has happened.  First - I am now on a non-stop flight which is always nice.  Second - I just heard that several students I know will be on this same flight and in the same hotel so I am not alone.  Lastly - I have that little bit of extra time to try and quickly print some business cards.  I gave up using them several years ago locally, but realized as I was sitting here twiddling my thumbs that it might be a good idea where I will be meeting so many new people who have never heard of Fame'd Magazine.  However, Murphy is not quite done with me yet as the printing program at Avery.com isn't working so I don't know if I'll have business card to take or not.