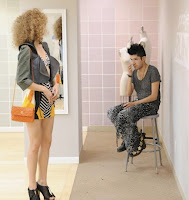 This week had what I felt was yet another dumb challenge that didn't give a chance for the designers to show off what they could really do.  There have been a lot or weird challenges over the course of Project Runway that I felt drove the designers to step out of the box, but others put on limits for the sake of limits. Some non-designing exec designed it would make for good TV.  This was one such challenge.

Project Runway All Stars has had several serious misses in this area.  If you want to bring back established designers, you need to give them more challenges that will propel their careers.  When I looked at the cast of this season, there were at least 5 designers I thought could have been better chosen.  Given some of the challenges like this, I suspect those designers, if they were even asked, made the right decision not to be involved.  As well, the host is a truly lovely person but doesn't have much camera pizzazz - not her look, the way she comes across when speaking.  That's something you have or don't and is not a criticism of her as an individual. 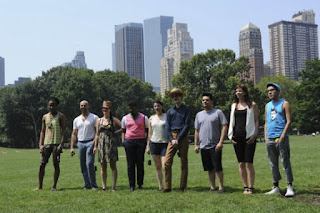 The designers were given $150 and let loose in the park to find a muse.  The trick?  You had to get the clothes off their back.  50% of the final outfit had to be from the clothes you were given and the other 50% would come from that purchased at Moods. If you could get the person to donate the items, or if you could strike a cheap deal, you had more money to spend later.  The limiting factor in my mind is you couldn't really pick and chose a muse or what inspired you.  The outcome was shackled by the fact it had to be someone who wanted to give you their clothes.  This challenge might have made for great TV to a general uninformed audience, but wasn't designed to showcase the designer's best work. 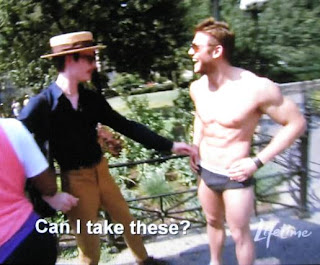 Top design for the judges was Mondo - Anthony was sent home.  Some of the outfits were okay, but few inspired me and I suspect the designers in general were not excited about this challenge or their final garments.  I didn't enjoy this week's episode over all, but  here they are from top to bottom in my personal opinion which has nothing to do with the judges take on the outcome.

I would have placed Rami (left),  Mila (centre) and Austin (right) in the top 3.  Overall Rami was my hands down winner. I love the print he used to trim the ruffle on the blouse and felt overall the construction, proportion and design was as strong as it could be given the limitations.  Mila also pulled off an garment that was true to her style despite it all, so kudos. Austin (right) stepped out of the box as a designer to produce a final product I wouldn't have known was his and as always, he has great proportions and finish work.

Middle of the pack garments for me include Mondo (left), Anthony (centre) and Kenley (right).  As you can see, I am at odds with the judges as I have both the winner and the person sent home here.  I love Mondo and always appreciate his work, but just am not taken by this offering.  However, it is totally his aesthetic.  Anthony is such a great presence on the show, I am sorry to see him leave. His design was not inspired, but I don't think it's the worst.  That said, I am not sure he had 50% of the garment made up from the clothes he collected, so that might have been the deciding factor.  Kenley always has great fit to her work and has matured as a designer.  I was glad to see her get away from polka-dots and that 50's silhouette she continues to produce.  Nice to see her do a slim shape in a different print.

Bottom of the pack this week for me all get the label, "What Were They Thinking."  I cannot help but love Jerrell (left) as I love anything ethnic inspired. There were several elements here with possibilities, but overall it didn't come together.  Michael (centre) is also hard not to be drawn as a person.  Just so heart-on-his sleeve.  As I listened to him talk during the construction process I felt myself drawn into the concept, but when it appeared on the runway I knew it didn't fly.  In particular the top does not have the right structure - it falls down and wrinkles under the right breast - and the shorts were a bit too much like underwear.  Kara (right) is again a lovely person, but I think has dropped the ball many times.  She would have gone home if I had been a judge.  She is a solid designer in some ways, but not an inspired or innovative designer.  Week after week she has floated in the middle ground, a sign that perhaps this is not the show for her aesthetic.

The episode 6 review will go up in just a couple of days, but I am going to warn you that one very deserving designer goes home.  Where this show will end up I do not know, but overall I am not impressed with the focus of the challenges and who is left behind as very talented artists are cut.
Anthony Austin design Jerrell Kara Kenley Micheal Mila Mondo Guerra moods New York Project Runway Project Runway All-Stars Rami