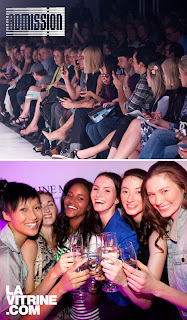 I have been looking forward to writing this all week.  Semaine de mode de Montréal/Montreal Fashion Week F/W '12  was a real eye opener for me.  Vancouver has a huge pool of talented designers, but the backing for a fashion week is very limited, especially in financial sponsorship.  This was my chance to view one that enjoyed a much larger support from both business and the fashion community at large.

First I want to mention Josiane Betit and Sophie Des Marais from MFW Press who held my hand and guided me expertly through the week with a smile on their face.  I couldn't have asked for more.  Now to the event. When I arrived on Monday at 5 to check in, imagine my surprise to be in a line 25 deep of media registering for that first night.  That line continued on well after the first runway show was finished.  I also did a rough estimate on seats and came up with an approximate figure of 450.  In addition there were general admission viewers standing during each show - a rough guess would be between 50 and 200 depending on the designer.  So the sheer numbers that needed to check in, get tickets, line up and move in and out every hour were overwhelming.  Somehow all involved managed to achieve this throughout the week with great patience and each time the process sped up just that little bit.  I loved that fact that all seats were numbered.  This solved the problem of racing in to get the best seat.  I walked in holding tickets, assured of my placement.  Every show I also saw Josiane and Sophie moving through the crowd dealing with any small issue that arose.


I was also impressed with the way Montreal Fashion Week handled media.  We had our own room to relax in between shows away from the noise of the large lounge.  In it were 2 internet stations, one with 5-6 laptops available for general use and another table with power bar underneath for those who brought their own.  Wi-Fi was in effect for both.  There was a seating area to relax in and a table with bottled water and a complimentary espresso machine available.  As well, for those of us camping out through all shows, they offered food packaged uniquely in a white cake box that included a sandwich or wrap, at least 2 salads, a fruit/cheese/cracker cup and a dessert.  As many of the businesses were closed early in the week, it was a life saver.  I was also the beneficiary of a few free drink coupons which were turned in for my favourite - sparkling wine. Total decadence!  I love bubbly. 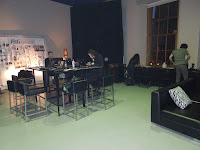 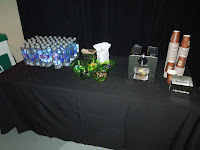 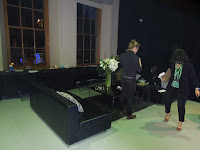 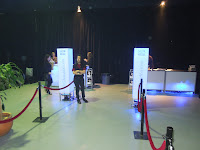 For those who loved the party atmosphere, there was a very large club-style lounge with tunes spun by a live DJ.  Standard stations to visit each night were a place to you your make-up done and a photo wall for professional pics.  There were also changing displays such as the stretch denim clinic by Second Clothing with acrobats showing off the true flexibility of these comfortable Yoga Jeans.  Another night there was an amazing French Macaroon display.  I had been reading about these decadents treats everywhere to happily gave a couple flavours a try.  It was worth it - they were delicious.  In  a black curtained hallway connecting the media room to the lounge there was a great display of art from fashion illustrators around the world.  Of course there was the bar staffed by 3 very friendly men who easily kept up with the strong demand for wine, beer, bubbly and cocktails for the thirsty crowd. 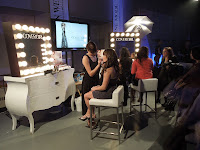 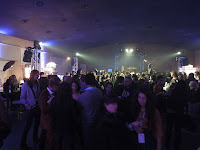 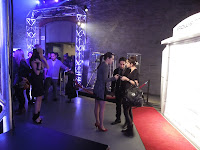 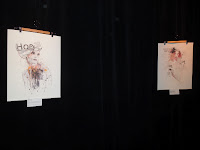 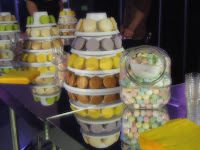 How the volunteers kept up their spirits dealing with the large crowd, I do not know.  All tickets had assigned seats, but there was always someone who tried to bluff their way into a seat they didn't belong in.  No problem - it was dealt with quickly and efficiently.  Several volunteers also had the back breaking job of rolling up the plastic protecting the runway before each show and rolling it back out after  the show was over.  Rolling it up was never a problem as we were all in out seats, but after the show many times impatient ticket holders wouldn't sit for the extra couple of minutes. I never once saw one of the volunteers lose their patience with anyone.  They just did the best they could and continued on.  I cannot say enough good things about these volunteers as each and everyone had a smile and a kind word for me.


The shows were amazing overall.  It's not possible to love the design aesthetic in every show. Taste is very personal. It's human nature to love some and not others. As well, some shows presented marketable collections which don't have the same impact.  So when I attend weeks like this, what I want is for there to be variety.  The current show I am watching needs to differ from the last in some way and I need a few of them to down right surprise me either in presentation, construction or ?????????  Montreal Fashion Week managed that easily.  There were very artistic and edgy shows contrasted with more wearable lines.  Straight runway shows were alternated with exhibitions and others used unique formats  While the last show featuring 3 designers was presented in a way that made it difficult to view the individual garments at times, it closed the week with a bang as the unusual presentation and atmosphere that took us all by surprise.  Kudos!  The perfect way to close a successful fashion week. 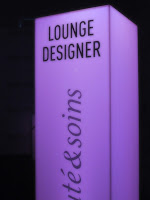 There was a media wall set up as you exited the runway area on the left for taped interviews with a variety of those involved in fashion week from local media to those working the shows.  This gave a chance to not only catch those they wanted to interview on the way out of the show while their thoughts were fresh, but  it let us all get a glimpse of the process and stop to hear a bit of the interview if we were interested.  As well, there was an Designer's lounge on a small stage in the corner of the lounge.  I think this probably worked well for those who wanted to tape a video interview after the show, or for those who knew the designer to catch their eye and say congrats, but as it was in the main lounge, the music was a bit loud for writers as our interview process is a little more intimate.

Now for the negatives.  I don't care how amazing an event is, there is always something.  For those who know me you know what's coming.  The sound level in the main club-style lounge and during several of the fashion shows was absolutely too loud. It was uncomfortable, made networking difficult and I heard some complain they had problems with ringing ears afterwards.  I am fortunate that I invested in a pair of custom ear plugs with vents a while back so I can hear those I talk to and yet not be bothered by the noise level, but it is still more comfortable not to have to wear them.  The high noise level is a strong trend now that I keep hoping will eventually pass, but it mostly likely will not not any time soon.  Anyway, there it is - I've said it for all those who commented to me, but not the organizers.  If more people would speak up, perhaps the change would come a bit sooner. 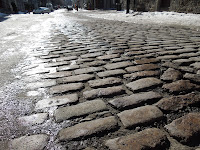 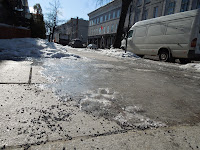 Other than that, the only concerns that arose were outside of the ability of Montreal Fashion Week to control.  One silly inconvenience was that the only 2 mirrors in the women's bathroom where women seemed to flock to primp were right over the only 2 sinks available to wash our hands. Obviously designed by a man. Sorry, I forgot to get a picture of this. As well, there was an ice slick on the sidewalk out front that was hazardous, but again, that was the responsibility of the Bonsecours.  Locals seemed to have no problem, it was just the out-of-towners who struggled to navigate it. It also took a few days to get a feel for crossing those cobblestone streets.  Overall, I thought the Bonsecours was an amazing location to hold fashion week at.  The large spaces provided a layout that worked extremely well and I love perusing the boutiques on the main floor the days I was there early. 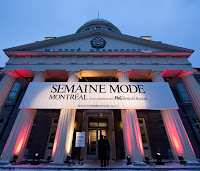 Would I go again?  Absolutely!  I enjoyed myself immensely, was treated extremely well and felt given the sheer numbers attending, they did their absolute best to make it work.  Again, kudos to all involved and thanks for making my week so enjoyable.  Hopefully I make it again next season.