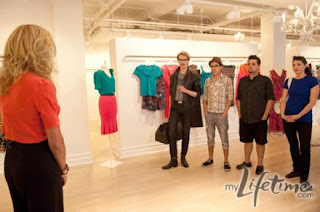 Episode 10 is where we find out who the final 3 will be.  I said several weeks ago I wish it could have been between Mondo, Rami and Kenley.  I can't imagine 3 more diverse designers to throw in the mix and each is known for their strong construction skills.  Several times I have asked others who they wish were in the final from the original list and so far haven't received any answers. Too bad.  It would be interesting to hear the who and why as others see it.

This week Mondo, Austin, Michael and Kenley are taken to Nanette Lepore's space in NYC's garment district.  There they are challenged to design a look within a well defined budget to be manufactured locally.  The winner's garment will be sold in Lepore's stores with 100% of the profits going to support Save the Garment Center Organization. I found this episode extremely interesting.  Despite the amount of interviewing I have done with designers, the actual dollar and cents of how it all works has never really been this clear.  If you want to understand the dynamics - this episode is an eye-opener. 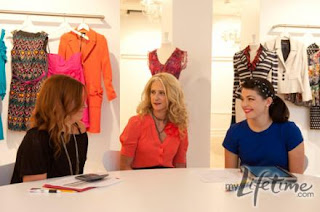 Lepore and her coster (person who calculates how much the garment would sell for and how much can be spent on fabric) reviewed each designer's efforts.  Here they would point out construction details that increased production costs and give them the selling price versus fabric allowance for the challenge.  It shocked me to hear Austin's coat would sell for around $500 and he could only spend I think it was $62 on fabric.  Mondo actually was given the least amount of money - about $32.  WHY?  It had to do with the price it could sell for (obviously less for a short dress) balanced with the fact he was cutting and assembling 4 different fabrics.  That said, they were only horizontal strips so I felt they perhaps overestimated the additional construction costs. What I took out of this was the surprising relationship between fabric costs and final sales price. For the garment to be profitable, fabric roughly had to cost around 12% of the final sales price. Wow! 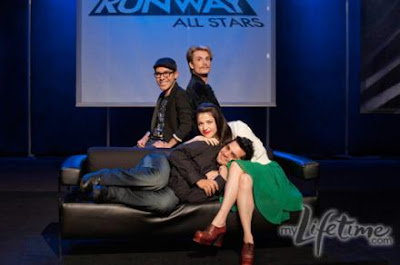 Mondo again came out of the challenge in first place.  I was intrigued.  The garment was 100% funky Mondo through and through and although I always enjoy his unique aesthetic, I wasn't sure Lepore would think it marketable in her stores. But winner it was. Even he was surprised. What is interesting as well is that the garment was VERY boxy.  He liked it that way and actually chose not to belt it.  All the judges commented on how it would have been better with a bit of a hint at the waist.  It is now online for purchase and surprise, surprise - they actually adjusted it slightly to give it more shape.  Not sure if they angled in the waistline a bit or just used the newly added small back ties to pull in the shape, but the look is definitely more refined.  Here are both the runway garment and the look shown at the online store.  To order your own Mondo original at $298 U.S. go to http://www.nanettelepore.com/the-mystery-dress.html. 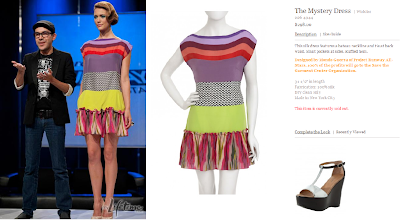 Austin had a VERY good chance of winning this one.  I haven't cared for most of his work this season until the light challenge last week which he totally nailed it.  This week he again hit the mark by creating a Swing Coat. There were a few issues with the fabric not being quite the right choice, but I thought the design would fit well in Lepore's boutiques.  The coat had a bit too much fabric for me when belted.  Only a super thin model could carry it off that much volume around the waist. But once the belt came off and the garment could swing freely, it was very wear-able.  I loved the effect when the model turned at the end of the runway.  The collar was  a shaped ruffle - a great detail without being overly fussy.  Another plus is that because of the volume, this coat could be worn over almost any garment, and the lightweight fabric makes it wearable in more seasons. 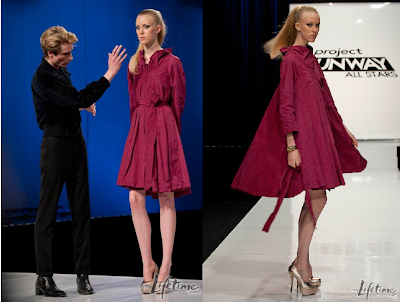 I love Michael.  His garments are always sexy and feminine and his draping is beautiful, but if Kenley had not dropped the ball this week, he would have gone home.  Several times he was told they could not sell a garment that dipped to the waist in the front and the back and yet he gave them just that. Even the model was concerned about her breasts popping out so he added a tie across the very top of her shoulders in back to keep it from slipping off.  I wasn't big on the print he chose, but it actually looked good walking the runway.  The large necklace he chose helped to fill in the deep dip in the front. It all came together well, but Lepore was never going to chose a garment she told him point blank would not sell.  If he had been smart, he would have closed it up at least a bit.  Sorry I don't have a pic of him showing it to the judges, they caught him with the model half turned. 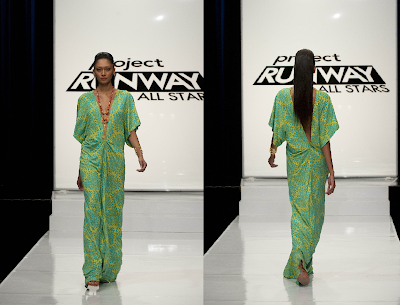 Last is Kenley who was unfortunately sent home.  I have to agree with the judges.  Why she would drop the ball here? I don't know as it was a print that was the problem - very strange as she usually has a knack for choosing prints.  The sketch she drew was similar to what she created but with a piping trimmed key hole cut-out in front.  Then she saw this peacock print and fell in love and had to take it out of her design.  Right away Lepore mentioned the loss of the detail and was not amused.  Mondo was the one who pointed out that the way the prints matched at seams wasn't that great and he was right - especially on the back view. I think the print used was just too large for the darts and shaping.  What Kenley designs works best with much smaller prints that blend well with darts and seams and a different fabric would allow her to have kept the small design detail.  She has won several challenges and been in the top many times as well, so it was unfortunate this one big mistake was her last. 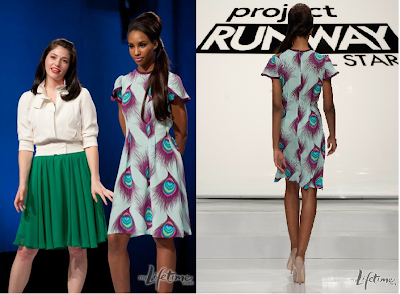 The finale will run over 2 episodes as usual, but I think will be much higher pressure than the regular Project Runway.  I'm looking forward to watching Monday so see what they have dreamt up for these 3. I know for Austin and Michael it is especially sweet as they were both cut right near the end in their regular season.