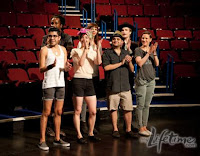 Having devoured absolutely every episode of every version of Project Runway, I was a bit sad to find myself disappointed in general with this incarnation.  BUT - and this is a big BUT - this week was the amazing. I loved it!  It was everything that I could hope for in terms of creativity.  There was a challenge that really took the designer's out of their box and offered them an amazing reward. As always, several rose to the challenge and others did not.  This episode was interesting and explored new depths in the artists.

Episode 7's inspiration?  Design a costume for a character in Godspell who is rich and ostentatious.  The garment was to be colourful and eccentric - totally out of the box.  It also had to be donned while the actor on stage and should look like it was assembled from items in her closet.  The reward?  It would debut on Broadway with full credits in the program.  I think each and every one of the designers salivated.  How cool to design a unique costume for a play like this instead of something read-to-wear.  It was a chance to really show off their incredible skills in an innovative way. 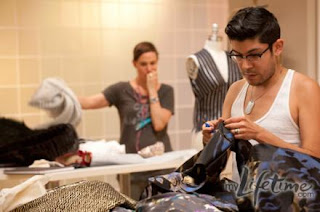 My top pics were Mondo and Michael.  I loved the eccentricity of their designs and colour palettes.  They nailed every detail put forward by guest judge Sutton Foster.  While either choice would have been a good one, I personally think the judges were bang on in there selection.  There was something about Mondo's aesthetic that worked particularly well for this play. The colour palette was a little more subdued, but the prints chosen ensured the garment still popped.  You could imagine this being thrown together from someone's closet.  It just had that undefined something that took  it to the next level for me.  I love these designers and was unbelievably happy to see both excel this week, but think the judges made the right choice.

In the middle for me were Austin, Jerrell and Kenley. The judges commended Austin for his construction skills and originality, but questioned the aesthetic fit for this play and I agreed.  The design was inspired by Marie Antoinette.  It was fun to look at and beautifully made, but the lack of both colour and eccentricity as defined by the guest judge meant it wouldn't work with the character presented.  So I enjoyed it - just not for this challenge.  Jerrell and Kenley did a decent job, but I wasn't inspired by their final offerings. Jerrell produced something that was so outside his box I was shocked.  While it didn't really mesh well with the challenge, it was a nice surprise. Of these 3 Kenley probably nailed the eccentricity the best and for once she didn't use polka dots, but somehow the final effect was shy of the mark.  I have been impressed with her growth since I last saw her, but she has to allow herself to step out her self-defined rut or she will find herself stagnant as a designer.  The talent it there, it just needs to be allowed to broaden and grow.


Finally are those I put in the bottom 2 - Kara and Mila.  I have been saying from day 1 I didn't think the challenges this show were up Kara's alley.  She is a lovely person and a decent designer when in her own aesthetic, but has been asked to step outside of that box many times.  That's not easy for her and the stress has shown.  This is the week she finally went home.  I think most viewers saw it coming, but as she is so personally appealing, it's impossible not to experience at least a little pang of regret.  Mila - HMMM!  I am actually a fan of Mila's work over all, but she is also one of those designers who struggles to put their stamp on a challenge that is too far outside their normal aesthetic.  The ideas are there - eccentricity, colour and the ability to be donned in front of an audience - but unfortunately at this level in the competition, the judging is tough and you have to be bang on.

I am running a week behind and have promised to catch up.  Hopefully my re-cap of episode 8 will be ready by Wednesday and by Friday I can cover episode 9 which airs tonight.  I wish all the best for Project Runway in all it's forms and hope the small problems with this first season of All-Stars can be ironed out so future incarnations will be offered.

For Canadian Readers - videos of episode 7 and 8 can be viewed at http://www.slice.ca/Slice/Watch/Default.aspx?ID=v.  This may change to 8 and 9 after tonight.
Austin design designer Jerrell Kara Michael Mila Mondo Guerra My Lifetime Project Runway Project Runway All-Stars runway Slice