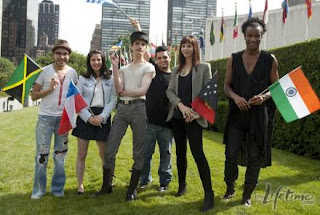 The challenge this week was to create a garment inspired by the flag of a country.  My first response was a yawn, but then I saw the wide potential as well as the difficulty the designers faced. I was intrigued.  Do you take the colour palette, the culture, the graphics or ??? as a starting point?  The obvious hole they didn't want to fall in was being too literal.


Last week I was in full agreement with the judges top pick, this week I am still wavering. There were 3 I found interesting and one was the garment that sent a designer home.  So it just goes to show lest we forget, the choices each week are based on the judges opinions and were the panel changed, the outcome would most likely change. 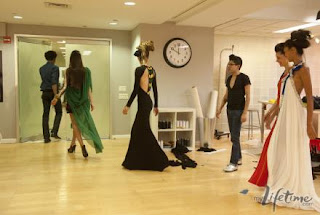 I wanted to show the garments with the flags, so had to place the photos differently this week.  The top 3 were my favourites - Mondo, Kenley and Mila.  The judges picked Mondo overall and sent Mila home, so you can see I am not in agreement.
Mondo - Jamaica (Judges choice as winner)

I am and most likely always will be a HUGE Mondo fan.  Last week he totally knocked it out of the park for me - no one even came near in my opinion.  This week I felt his creation didn't really explore the theme in a creative enough way.  It was a beautifully made and conceived garment that was styled well - in my younger days I would have worn it in a heartbeat - but the only inspiration from the flag was a strip of colour down the back. I love this dress, but don't really feel it was creatively a big enough stretch. 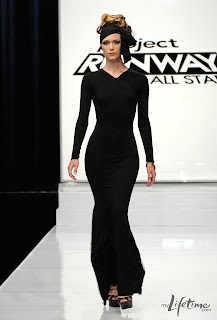 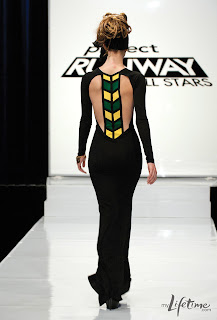 Kenley - Chile (My choice as winner)

I continue to comment on Kenley's growth as a designer while lamenting her constantly using the same silhouette.  Today she stepped away from that fitted top with flared skirt to give the judges another option - still feminine and oh so Kenley, but just twisted a different way.  The 3 colour of the flag are pulled in, the ruffles are a hint at the South American flavour, yet is is modern and feminine.  I personally would have given this garment the win over all.  The elements of inspiration are there, but it is an unexpected interpretation.  I love surprise and she surprised me this week. 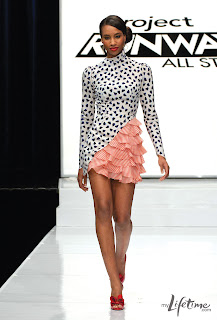 Mila - Papau New Guinea (Judges sent home- I would have placed second.)
Mila has struggled a few times in recent weeks finding her voice as a designer in some of the challenges.  The judges were not impressed and chose to send her home.  In my opinion, this was one of the more creative garments offered.  You can see the inspiration from the flag, a bit literal but still out of the box in terms of being the most unique silhouette. I liked the asymmetry and was sorry the judges didn't reward her direction.  The garment is infused with her aesthetic - strong contrasts and shapes.  It was a close tie for me between Kenley and Mila for top outfit.  The reason I chose Kenley over Mila was that the Kenley's design was a little more subtle in the way it used the inspiration.  With Mila's, you look at the flag and get it instantly. 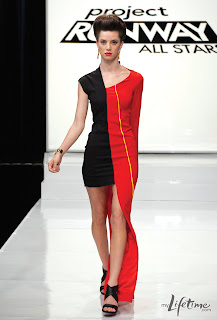 Michael - Greece
Oh my lovely Michael.  The deep back on this dress is striking and it flows beautifully.  Definitely can see the inspiration in the Greek gods as well as the stripped blue trim.  I know many women who would wear this.  But the judges felt it look like a beauty contest dress and I agree.  That draped silhouette is his go to as well.  His dresses always make a women look feminine and beautiful and I know that he will draw a large clientele just because that is what he does so well.  I just felt this dress wasn't editorial enough for this unusual challenge.  He didn't take any risks or bring anything new to the table. 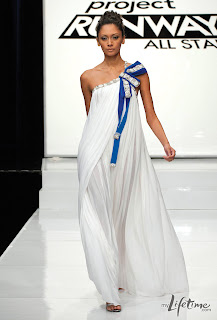 Austin - Seychelles (Bottom 2 for me and the one I would have sent home.)
Why, why, why did Austin choose this direction.  It really was awful and utterly predictable.  The designer was not happy with it either which is a sure sign.   Austin is a lovely person and talented designer, but I continue to find him missing the mark week after week and yet someone else is always sent home.  The writing is on the wall - the judges are going to leave him in through the final despite his numerous misses.  I would so rather see Rami here competing. 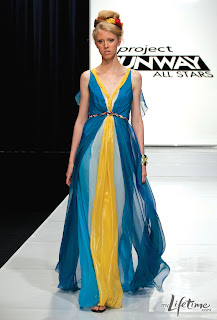 Jerrell - India (Bottom 2 for me)
Jerrell is another one that, while he stays true to his aesthetic, continues be miss the mark on challenges.  There are some designers who excel when given out of the box challenges - taking their design work to the next level.  Others are best when the inspiration comes from the inside and their own personal intuition.  I really think Jerrell is one of the later.  He has won one challenge, but has been in the bottom more often than not.  I think he is truly talented, but his direction in this challenge was just too predictable. 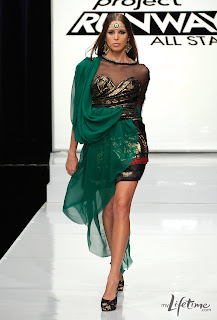 Of the 2 I placed in the bottom, I think I would still have sent Austin home.  I honestly cannot see the inspiration in the final garment.  For me it's just a bunch of coloured fabric strips in a pattern and when you listen to Austin talk about it in the workroom, it's obvious he thinks it's a miss as well.  For the winner, I still like Kenley although I am sure others will disagree. 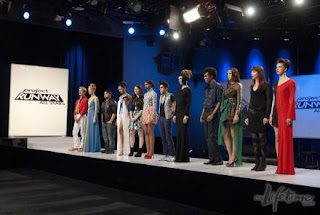