Talk about a pressure cooker.  Last night Project Runway host - Angela Lidvall - let the 3 finalists know they had 4 days to create 5 looks for a runway show.  Normally they get at least 1 day per look, sometimes 2 if it's a complicated challenge.  But in true reality TV fashion they gave them 4 days and this included sketching, model casting and those pesky people determined to give them pep talks - Isaac Mizrahi, Joanna Coles and  Georgina Chapman.  Michael and Austin seemed to take it in stride - Mondo went to a very dark place. 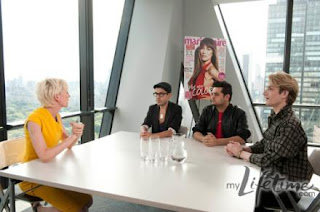 I have always loved Mondo's artistry whether I like what he produced or not.  He is unique, one of a kind and has proved his range by winning challenges such as designing for a Broadway production of Godspell where he smoked the competition.  On the other hand is his dark side. Seems there is a dark Mondo world he goes to where he can't really deal with anyone else.  He has been showing signs of wear these past few episodes - "I feel dead inside" - and it came home this week.  He turned into a bit of a brat this episode. Austin was offended.  Michael blew it off and commented that from this dark place, Mondo often produces his best work.  We will see as he ended up not doing any work his first day leaving only 3 days for all 5 looks.  In the end he decided he needed therapy after being on this show and started on a collection called "Therapy," even creating a Rorschach inkblot pattern on one fabric. 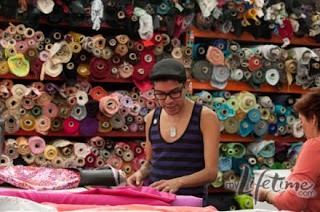 Michael decided to do an African Safari inspired collection which their mentor, Joanna Coles, applauded as it had the look of resort wear.  She commented that resort wear is now 30% of the market - a fact I did not know.  I am always drawn to Michael for who he is as what you see is what you get. He always comes across as very honest and open. When faced with this incredible deadline he just smiled and got to work.  No drama, just a lot of excitement to be in the finale and show what he can do.  He is absolutely the quickest worker in this competition who is always able to pull out a plan B or plan C when things go wrong. So perhaps there is a good reason for his self-assurance.  What little glimpse one could see of his garments was mostly hanging in a row on the rack and from that vantage point, the fabrics looks cohesive. 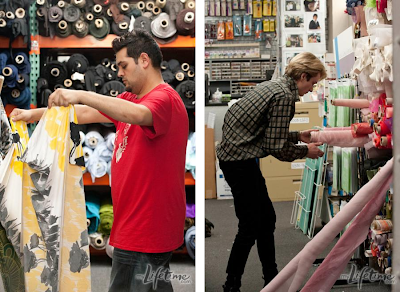 Austin is drama with a capital D, but not in a negative way.  Larger than life and uber expressive, I always find him the hardest of the 3 to warm up to because he is so over the top,  He is also a very talented artist who can do amazing things as seen in the light challenge.  Being in the finale is particularly special because this opportunity was not to be during the regular season. He was the last eliminated before the finale. His inspiration was confusing - "Fragonard meets Madame de Pompadour meets Williamsburg Hasidic rock star ."  HUH????  What he began to design was extremely ambitious given the short time available.  Risky to say the least but totally Austin.  Go big or go home.  I can't wait to see if he is able to finish it all including the final piece which is a elaborate wedding dress. 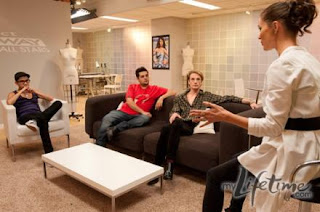 Of course there was a twist.  They were challenged to create a 6th look out of fabric left over from old challenges.  It had to be cohesive with their current 5 looks.  Each chose 1 former contestant to help them for 24 hours.  Mondo picked Mila, Austin picked Anthony and Michael picked April.  I thought each of those strong matches.  The challenge was going through remnants of former fabrics to find something that would mix with their current designs.  Each was heartbroken when their help left.  4 days is just not enough time to produce runway ready work (3 for Mondo because of his snit) and they were all feeling the pressure. 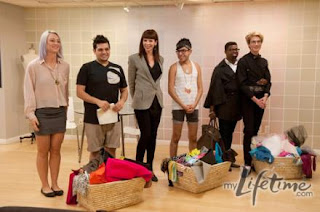 Next Monday it all comes to a head.  Did they each manage to finish their full collection the way they envisioned it?  With 3 such diverse designers, if they all complete the collection they envisioned, it may come down to what the judges like the best.  What angle will they look for - marketability, uniqueness or ????????? 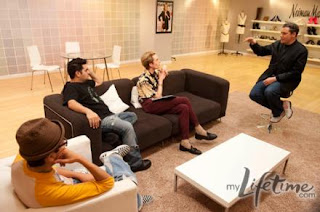