Miami in a Few Days 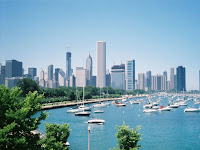 It's been awhile since my last post, but that's okay.  Every writer needs a break now and again to clear the cobwebs. Today I want to recap my short visit to Miami. When the total trip is 5 days including plane flights, we're not talking a lot of time.  I was on my own during the day and then spending time with Glen at night.  What I thought I would be doing and what I ended up doing were very different.  My first thought was that in addition to some general tourist jaunts I would spend several hours a day writing and hit the hotel gym.  The writing just didn't happen, nor did the gym, but I covered a lot ground in Miami and Miami Beach.  I love architecture and history so that's where my main focus turned.

When you visit a new city - the first thing you have to decide is what you want from the trip and that defines where you chose to book a hotel.  As I was travelling with my husband who was there for business, we ended up at the Holiday Inn on Biscaynne Way  in the city which was one block from the college he was working at during the day.  This saved him tremendous travel time and turned out to be a great location for exploring.  The discount room had a terrible view of a side roof with the air conditioners on them - the funny part, my husband works in air conditioning!!! :) The hotel was right across from Bayside Market and Park - the central location for the Hop-on Hop-off Tour Bus that proved my best transport during the day.

If you want to be in the midst of the noise, action and sand - you'd probably want to stay at South Beach, but be prepared.  I spent $18 on one Mojita.  They don't put prices on the drinks in the menu so don't be afraid to ask as they range wildly.  The main drag is also very noisy, but it does get quieter as you head to the north end of the strip or back away from the water.  The newer hotels to the north are right on the water and seem quieter - at the main South Beach strip you have to cross a park to get to the water.  If you do not want to explore and are focused instead on relaxation with lots of peace and quiet - Key Biscayne looked lovely.  We only went to the national park there the last morning on our way to the airport, but passed several nice hotels and beaches that were low key and out of the frenzy of the main tourist areas. 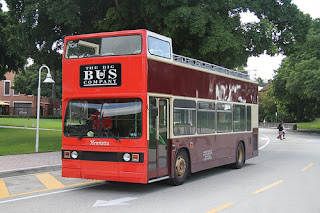 For exploring, the  Hop-on Hop-off Tour Bus offers a city loop of Miami that hits Vizcaya, the Miami Science Museum, Coconut Grove, the Biltmore Hotel, the Venetian Pool, Coral Gables and Little Havana.  Then there is a Miami Beach loop that includes South Beach where a part of your ticket price includes a free self-directed audio tour from the Art Deco Welcome Center covering the history of the area as well as many new hotels and tourist sites. $64 (just under $58 if you book online) will get you a pass good for 48 hours that includes a boat cruise.  If your goal is to explore as much as possible in a short period of time, this is a good way to go. Both leave from the Bayside Market so having a hotel near there saves a lot of time.  I started the first day around 11 a.m., so my pass was good the third morning until 11 a.m.   Each loop of the bus takes about 90 minutes. They have a guide on board to give you the history of the area and point out interesting spots. You can just ride it as a tour bus, or use it as transportation to get around the city and beach.  There is also a local bus system that costs only $2 a ride, some limited free trolley service and an overhead limited free rail service.

For the first day I rode the city loop without getting off just listening to the guide and checking out where I might like to come back the next day. Then I jumped on the Beach loop.  A welcome break was at South Beach for the audio tour.  The suggestion was to walk and listen to the tape, then stop for a drink somewhere and re-listen to the parts that interested you - a good choice I followed.  Day 2 I rode the City Loop again to Vizcaya.  I love historical buildings and this one was a goody that still had most of the original furniture.  I tried one of the recommended shopping stops - Coconut Grove - but was not impressed.  Then in the afternoon it was time for the boat cruise.  The commentary was a bit lifestyles of the Rich and Famous for me, but it was still interesting.  Day 3 I took out to Lincoln Road and Espanola Drive and was disappointed by both as far as shopping, but there were many restaurant possiblities.

Interesting notes -
- The architecture of Miami is much more conceptual that other places I have been.  I was especially intrigued by all the cut out spaces in the high rises.  In Vancouver we would never give up the chance to earn that extra income.  The best is Th Atlantis by architectural firm Arquitectonica.  It has a 5-story Palm Court through in the middle of the building that supposedly to represents a town square. 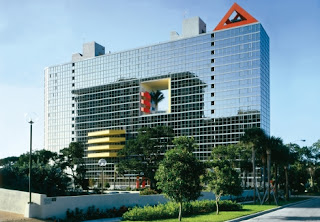 -  Of the 22 islands that make up this area, all but 2 are man made.
- On one island the average annual income is $54 million
- One of the biggest properties on the richest island is owned by the man running the company that sells Viagra.  It cost $50 million to build.
-  Another property had air conditioning outside as well so those by the pool were comfortable.
- A couple of these high end islands allow you to drive on, but you have to surrender your driver's license at the gate, they take a photograph of your license plate and warn you not to get out of your car. All this so you can look at the high wall all the celebs have put along the road so you can't see them.
-  Coral Gables might be a rich place to live but too many rules - If you paint your house a color that is not approved you are fined $250 a day until it is returned to an appropriate color, $250 fine if you leave your garage door open for too long as you're inciting crime, $250 fine per day to both you and your real estate agent if your sale sign is larger than 4 inches by 8 inches, $250 fine if you have a landscaper working on your property on the weekend, and the list goes on!!!!
- I never saw anyone outside enjoying the sun, their pool or the water at any of these expensive homes.  With tour boats going by constantly, what privacy would you have?
- Over 60% of Miami is bilingual
-  I never saw anyone with a sunburn.
- One mojita could cost from $9 to $19.  There were no prices in the menu for drinks so you had to ask.
- You could buy drinks at the Bayside Market and walk around with them outside.


Shopping -
I had very little luck finding stores that offered something unique to the area. Someone with more insider info or time could give you better information, but in the few days I was here my experience was that all the places that were recommended - Coconut Grove and Lincoln Drive in particular - were disappointing.  Nothing unusual about them.  I actually had better luck shopping at the Bayside Market across from my hotel.

Restaurants -
Food the Bayside Market was standard fare - Chilis, Tradewinds, Hard Rock Cafe, etc.  There was one Argentinian restaurant we didn't have time to try, but based on the others we let it go.  Lincoln Drive may not have had much in shopping that interested me, but one of the best meals I had was there at Yuca (Young Urban Cuban American). Very nouveau Cuban. We both shared a salad of spinach, fried goat cheese and strawberries.  Then I had Yuca Rellena - an noveau dish with mushroom picadillo (picadillo is usually made from meat, raisins and olives,.so surprising).  The presentation on this dish also sold me before I even took that first amazing bite. It was my favourite meal of the trip. Glen had Ropa Vieja Angus - another well presented, tasty dish.  Special note - there is a space above the restaurant for those who love Salsa dancing.

The other restaurant we both liked was tucked on a short back street just a few blocks from our hotel.   CVI.CHE 105 (Cerviche 105) offers Peruvian cuisine.  The most popular dish around us was a 4-sampler of Cerviche that wasn't on the menu, but having already eaten Cerviche, I wanted to try something new.  We started with Lima Criolla Stuffed Potatos which were crusty on the outside and filled with a tasty traditional Picadillo on the inside.  Then I had Tacu Lomo which made my taste buds stand up. Glen took a taste and ended up awarding it the best dish of the trip.  He ordered a fish dish in yellow sauce with a small topping of crab that while good, did not have the expected flavour pop of mine. The only down side was that both meals were a bit on the salty side.

So there you have it - Miami and Miami Beach in a 3-1/2 day nutshell.  Everyone's experience will be different as what you want from your holiday will be unique.  My best advice is to think carefully about what you want from the trip and then spend a few days of research finding the best place to experience that.