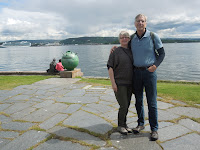 Day 3 and 4 were our last 2 days in Oslo.  If you haven't read the previous posts, there is a general travel overview with recommendations and a Day 1/2 write-up that might be good to read first.

One thing I loved about being on the Norwegian Fjord and Glacier self-directed tour by Authentic Scandinavia was that, while the basic schedule travel is set, you have the freedom in each location to get up in the morning and choose what the day will hold.  Day 3 was GLORIOUS.  We looked out the window to a blue sky without a hint of cloud and that changed our focus.  After another amazing breakfast at the Thon Opera Hotel, we jumped on the metro courtesy of our Oslo Pass and headed for the hills.  Oslo is not as mountainous as the Pacific Northwest - more rolling - but on one of the higher points rests the Holmenkollen Ski Jump Tower and Museum where we could get a great view of the city.  Both Glen and I feel you don't get a feel for the lay of the land until you get a view from above.

The metro stations are underground in downtown so you do have to look for entry points, but they are well-marked.  Your Oslo Pass guide tells you exactly which train to take and the name of the stop to get off.  Easy!  What wasn't easy was what we faced when we left the train.  Fortunately Glen and I love to walk as it was a trek up a pretty steep road to reach the ski jump - not for someone who out of shape.  I admit I was huffing and puffing a bit by the time we arrived. First you enter a ski museum full of very old antique skis and an exhibition of skis used by famous athletes as well as tons of photos and information.  Then it's an easy elevator ride up to the top.  I loved the 360 degree view of not only city, but the surrounding country side.  However, it only took one glance from the top of the ski jump down to conclude those athletes must be just a little bit crazy.  Okay, may a whole lot CRAZY!  It was frightening.


Although the clouds were slowly accumulating, we threw caution to the wind and decided our next stop was going to be at Vigeland Park and Museum.  Our guidebook told us where to get off the metro and which bus to take, but not where the bus stop was in relation to the Metro Station.  Enter a few very helpful Norwegians who helped us find the right bus stop and made sure that we knew where to get off.  There was no mistaking when we reached Vigeland Park as it is enormous with a parking lot full of tour buses. The park is free and so is the museum if you have an Oslo Pass. 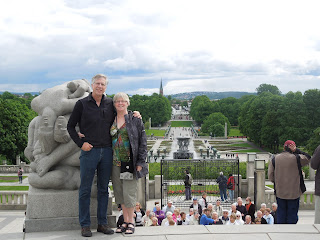 If we were to do it over again, we would have gone to the museum first.  It is full of information on the sculptures in the park and the sculptor as well as small and life size examples of what you will see.  After going through the museum I wanted to go back to the park again, but we were just too beat.  We decided this one night to break tradition and just go out for pizza at a chain we saw everywhere in the city - Pepe's Pizza. 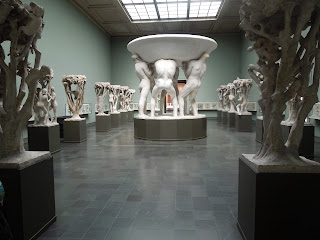 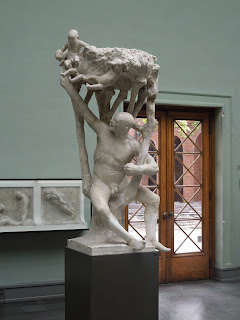 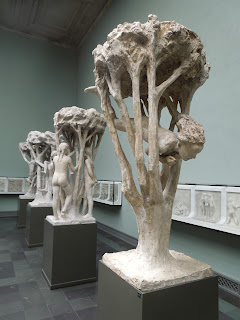 Day 4 was our last in Oslo before we started cross-country and after 2 days of visiting sites, we were getting burnt out.  There were a couple we still had our list that were smaller which would leave us more free time to relax.  Akershus Fortress was only a short walk from the hotel and our Oslo Pass was good until noon, so we headed out right after breakfast. While walking there we saw something I have never seen here in Vancouver - a row of electric cars parked on the street all plugged in and charging! 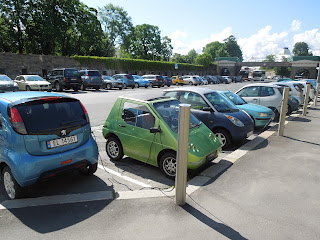 At the fortress we were offered a free audio tour and I would highly recommend it.  There is a lot of history in this building and not much in the way of signage.   The fortress has been renovated several times as well as restored.  What was interesting is that those in charge of the restoration had to guess many times as to what would be appropriate for the age of the building. There just aren't enough historical records to be exact. While walking through, I was again struck by the ornate embellishment on the furniture in particular.  This building, despite it's age and history, is still used for occasional state functions and the chapel holds services every Sunday for the military.  It also can be used by anyone in the military for their wedding. 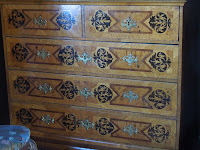 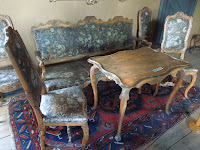 Glen and I decided to find someplace unique for lunch and were pointed by a local to a courtyard hidden behind a large church where there were 2 offerings and no street noise. Cafe Bacchus caught our attention.  As the day was beautiful, we could sit outside and relax.  The menu featured local ingredients as well as a large selection of beer from micro-breweries.  It was one of our more expensive meals, but well worth it.  We were surrounded by business men and mums with strollers chatting.  The good food was excellent and the service first-rate.  I am sorry I forgot to take a photo of this cafe, but thought I would be able to find one online.  Unfortunately there are only photos of the inside seating. 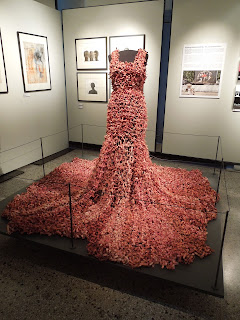 Our last stop of the day was the Historisk (Historical) Museum.  Because of the security guard strike, only the first and third floors were open.  Of these two I think the first floor was more in line with what we wanted to see - the history of the people of Norway covering 9000 years from the "Ice Age to Christianity." Authentic jewellery, weapons and implements were displayed in one area. Another held a Medieval church exhibition featuring very old religious icons and a highly decorated chancel roof from a 14th century Stave church.  While we did walk around the third floor, the only thing that really caught my eye was a Sri Lankan art exhibit.  In addition to paintings, the show had the red dress pictured to the right created with short pieces of dyed elastic intertwined and roughly tied. By this time our brains were exploding and there wasn't room for another fact.  We were both glad that the next day would take us away from Oslo to enjoy the countryside.

As we wrapped it up early this day, Glen decided to rent a city bicycle from Bysykkel (page will need tranlation) and get a little exercise while seeing a few areas we hadn't walked.  Oslo has the pick-up/drop off system with bikes racks placed all around the city.  Unfortunately, his first try was the one time it actually rained and he came back pretty wet.  All is good though as the sun peeked out a few hours later and he had a great time. Despite carrying a bike map and having walked the city a couple of day, he ended up mildly lost both time. 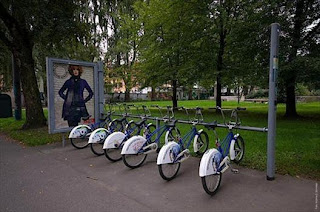