Tips To Being a Tourist in NYC 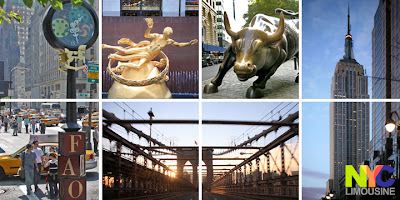 In my short time in NYC riding the subway, walking the streets and doing the touristy thing, a few things have become apparent.

1. First you need to know the lingo to ask for directions or figure out where you're going whether on the Subway, walking or even choosing a location to meet someone.
Uptown - going north towards Central Park
Downtown - going south towards Soho and Brooklyn
Crosstown - going east and west (you get to guess which way)
Midtown - itt means halfway between the north and south end of Manhattan.

2.  If you want to travel around a lot for cheap, the unlimited Metro Pass for $29 is a great deal. It can be purchased in a vending machine in any subway station. Then get yourself a subway map to have on hand. My favourite is a small one that when you open folds out origami style.  All those coloured lines look like Greek in the beginning, but every day it makes a little more sense and I have used it endlessly to point at and say, "Here is where I am trying to go, where is the subway station." Saves so much time and energy.  WORD of CAUTION - if you somehow screw up in swiping it and it thinks you've gone through, you have to wait 18 minutes before trying again.

3. Bus transfers are a little harder to figure out so take a small computer or tablet and use the custom trip planner at the NYC Metro website.  It breaks it down step by step.  Remember, if you don't have a printer where you are, you will need a pen and paper to write it down. WORD of CAUTION - Until you get your Metro Pass you have to pay in cash, around $2.50, but they don't take bills. That's a lot of quarters for an international tourist to come up with the first day.

4.  Don't be afraid to ask a NY'er.  They travel on these crowded subways a lot so have learned to sort of zone out, but as soon as you ask for help I have found them nothing but super friendly and caring.  The only word of caution is they don't always give you the correct advice, but you begin to get a feel after a few days for who is guessing and who really knows.  Again, the map helps with this as well because you can point to where you want to be.  And if they have you get off the wrong place, then look at it as the universe stepping in.  It's how I randomly ended up walking across the Brooklyn Bridge.

5.  Then there is the Hop-on Hop-off Bus run by either City Sights or Grayline NY. I adored this in Miami and used it not just for sight seeing but to get around.  While I learned some really interesting facts on the NYC version, you can't use this to get from point A to point B very quickly.  The traffic in Manhattan is too slow and crazy and you creep along.  So stick to the 24 hour pass - 48 if you're really patient - and add in a harbour cruise.  Still a great way to get an overview of the city, but again don't try to use it as transportation between places.  That worked in Miami but doesn't in here.

5.  No you can't just stroll in the Metropolitan Museum of Art for a few hours - totally frustrating, BUT you can do this at MOMA and the Guggenheim.  You need more time to really see the art in depth but the loose stroll where you let the art catch your eye works at the second 2.  The MMA needs time!

6.  The Empire State Building is an amazing piece of history, but you need to be patient with crowds.  If not then this can be a bit overwhelming.  Many of us chose to climb the last 6 flights of stairs just to get out of the crowd.  If you only want a high city view and don't care of the historic part, try the Top of the Rock. I was told it was less of a mob.

7.  Although more expensive, the car service from the airport really was wonderful.  You prepay it and that includes the tip. They wait for you at the carousel so you just get your bags jump in the car. It's usually a flat fee so if there are 2 of you, you can split it.  A word of caution here - our driver was not at the carousel so we had to call.  He was close by and we were picked up in 10 minutes.  The lesson - you need a phone and the number of the service handy on arrival.

8.  If you go to a big hotel and one of the bell boy touches any object of yours you are charged a fee - it ranges but could be $50 or more.  On top of this you are expected to tip.  If you set things on the sidewalk they might charge you $15.  So if you pull up with a bag keep between it and the person trying to touch it and if you have to set baggage down do it on the street!!!!!!!!!!!! Thanks to designer Katherine Soucie for sharing this one with me.

9.  Another great thing to do that I didn't get to this time is Bike around Central Park. It doesn't need to be pre-arranged as there are vendors at all the entrances ready to take care of you.

10. I loved being in an apartment where I could stock the fridge with some food and wake up at a slower pace.  The one we are in was booked through AirBandB.  I don't mind the commute DT from Brooklyn and it definitely saved money, but if you want to be in Manhattan, then just search for listings in that area.

11. The New York Pass (unlimited) and the City Pass (6 sites) are both great deals.  Which you chose really depends on how you want to spend your time here.

12.  Last but not least - if you are into photography, you absolutely must go by B & H photography/video - it's mecca for photographers around the world - and don't forget to bring your wallet.  It's impossible to leave without something.

I will add to this if I think of more - but this is a pretty good start.