Wild - From Lost to Found on the Pacific Coast Trail

When my husband who is not usually drawn to personal pathos suggested I read Wild, I assumed it was just a comedic book about someone hiking the Pacific Coast Trail unprepared. That could not be further from the truth. I have been trying to wrap my mind around what I wanted to say about this book I found so very powerful and it has taken a bit of time.

One thing I try to do when approaching a review is to look at how others perceived the book/film/product. Imagine my surprise to find many who disliked it. Wow!  Perhaps understanding what this book is and is not would be a good place to start to help readers decide if it is one they would enjoy.

What this is not - A guide to hiking the Pacific Coast Trail.  A person crowing about how they did it all wrong and what a great thing that was. A book on how to back-pack. Someone talking about what a great life they have. Someone asking for sympathy.

What is is - A powerful and honest memoir by the writer who talks about screwing up her life totally and, although sharing the tough childhood that had an effect,  taking responsibility for messing it up. A humorous look at someone deciding to backpack with no thought to the details or preparation and what it would cost her physically. An open discussion of how this brutal hike that she finished against incredible odds, helped her develop the inner strength to chose a new path. A New York Times #1 bestseller!

Cheryl Strayed's father was a brutal man who beat her mother and was abusive to the children.  Her mother finally walked away and did her best to create a better live for the family. Then came a step-father who provided love and stability to the family. They moved out of town onto the land where Strayed was free to explore.

But the scars of early childhood were not dealt with and the death of her mother when she was only 22 put her on a profoundly negative journey.  Desperately trying to hold together a family that firmly drifted apart, she spiraled downward - sabotaging her marriage to a wonderful man with numerous affairs and becoming a habitual heroin user. 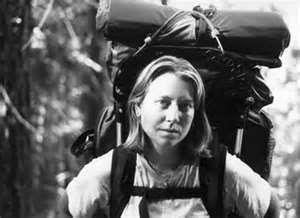 One day she happened to glance at a book on the PCT while in a check-out line, picked it up and then put it back. But the seed was planted and she found herself returning to purchase the guide.  Intuition is a powerful driving force and the call became too strong to ignore. At 26 she decided to listen.


While Strayed did spend months purchasing items recommended by staff at a proper backpacking store, she skipped some of the most basic things - reading up in the guide on recommended equipment, checking the weight of her pack, breaking in her boots, looking into how much money to send to each drop location, building up strength and endurance by taking some training walks carrying a loaded pack while wearing her new boots and the list goes on. She prepared only in a intellectual way that focused on the positives, but had not once stopped to think about the reality of the journey and distractedly skipped over advice sections that didn't interest her as she read. 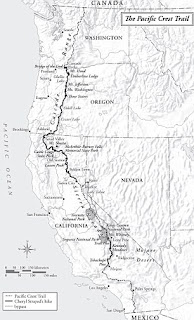 In the end, when she loaded up her pack and tried to put in on at the starting point, she couldn't lift it. Food, equipment, tent and more, it all added up.  One dromedary bag when filled weighed 20 pounds on it's own. The description of how she managed to get it on her back is not to be shared as I don't want to ruin the surprise. It's incredible she didn't just say - WHOA, too heavy. Time to make some changes.

But  this was no white princess. She did the impossible and managed to not only get it on but carry it through the early part of the trail until someone helped her get rid of some unnecessary weight. Several times along the way, a fit male hiker picked up her pack only to say - wow, I've never carried a pack that heavy. It cost her, though, in terms of feet that were totally wrecked and joints that always hurt.

Over the course of the book, you are treated to an Erma Bombeck (If Life is a Bowl of Cherries What Am I Doing in the Pits) style book full of self-deprecating humour set against despairing moments of self-revelation.  There are hilarious moments, times she shares the beauty of the trail and others where she shares her personal demons. She makes no bones about the fact she was ill-prepared.

Stories about her time on the trail are interspersed with flashbacks about her troubled life and how it brought her to this moment. One can't help but be amazed she stuck it out against all odds. I think the desperate state of her soul kept motivated. One telling point for me is when she discusses her last name - Strayed. It is not her birth name or her husband's name. It was what she selected to write on the divorce papers when asked what name she would be going by in the future. 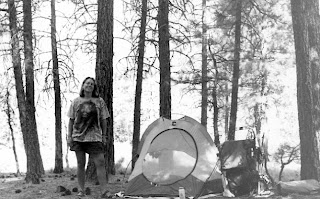 The mental challenges of the trail were enormous. The journey took her from desert floor to 12,000 foot high peaks, from unbearable heat and thirst to cold and snow. There were moments of total isolation interspersed with the camaraderie found amongst fellow hikers and feelings of fear, elation and desperation (such as when she lost a hiking boot).  In the end, this proved to be a trial by fire that allowed her to let go of her personal demons and move forward in a more positive life direction.

Well written, heartfelt and honest, this is personal journey is so much more relevant than all those reality shows we seem to support. Time to walk away from TV and take a walk on the wild side.
backpacking books Cheryl Strayed From Lost to Found on the Pacific Coast Trail. Pacific Coast Trail Tedx Wild