on March 14, 2013
Check out recaps of other episodes by clicking the the Project Runway tab. 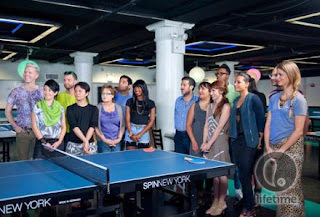 For episode 2, Academy Award winning actress Susan Sarandon stepped onto the stage to promote her "...preeminent ping pong social club..." - SPiN - New York City's newest wave of night life, dining and entertainment. After a brief intro, the teams were given their next challenge, design "...fashionable, fun and upbeat..." server and ball boy uniforms for SPiN. The company logo - Balls Are Our Business - needed to be reflected in the designs.

Each team is challenged to produce 5 looks.  They are given 3 female models, 2 male models, $500 and 1 day to complete the challenge. The winning design will go into all SPiN locations across the United States.  To help teams soak up the ambiance and get a feel for the venue - a combination of table tennis, bar and restaurant - the designers were put to work as servers or ball boys. There was also an opportunity to talk with employees about what they felt was needed in terms of design and comfort. This challenge forces the group to agree on designs and work together as there are only 5 looks in total and 7-8 designers on each team. I always find it interesting at the start of challenges how many say this is right up their alley and then struggle in the end. This episode is no different. 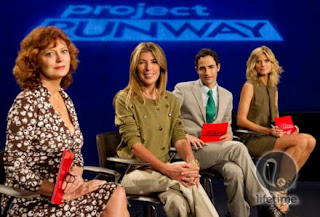 Before I review the teams, I think it's important to note part of what is reflected in the wins is that one team is working very well together and the other is still struggling to connect. With the loss last week and the reminder to try and support their weakest links, there was additional pressure that put more strain on Dream Team.

I also want to share an amusing conversation heard at Mood Designer Fabrics between Joseph Aaron and Richard who ended up co-designing one of the top 3 looks. They were deciding on fabric and had wildly different opinions as to what would be right.

Richard - Are you doing a black shirt or a white shirt?

Joseph Aaron - I would like to do polka dots?

Richard- These are masculine men that work at this place!

Joseph Aaron - I know but it's like, they can still be cute you know.

Richard - They don't want to be cute. They want to feel confident, sporty and handsome.

This is their second win in a row and it was well deserved.  Overall the judges picked the garment designed by Daniel (vest) and Layana (skort with pockets that looks like an apron) as the top look and awarded Layana the overall win. Another cool element was on Joseph/Richard's - a velcro harness for the ball boy's pole (no pun intended). The graphics on the legs are actually added pockets and echo the design on the chest. Their look received an, "I really like that!" from Sarandon while on the runway.


Comments from the show's blog -

James - The vaguely alarmed look on Nina's face as James exposited about this look said it all. This isn't a bad look, per se, but not for a food service employee (no sleeves = no go) and not for an indoor club-type atmosphere.


Benjamin/Cindy - Again, not a terrible look overall, but absolutely not appropriate for the setting. The puff sleeves and short-cropped torso on the jacket looked very "lady ringmaster at the circus" to me.

Benjamin/Matthew - I understand why this look doesn't work visually (and why it wouldn't work for SPiN's purposes) and yeah, that screen printed crotch overlay was tasteless, but Matthew gets many many bonus points in my book for going with his gut and making a kilt instead of standard jeans. Had the other parts of the look been stronger I think the judges would have responded to this a lot more favorably, if not for the ball boy than perhaps for a server or host.

Other looks from the losing team are by Samantha/Tu and Michelle. Samantha/Tu's offering really didn't look like a sports club uniform to me and the design wasn't all that interesting either. Michelle's didn't wow me in originality and might be a bit conservative for a hip club, but had a very useful appliqued pocket and the upper back was accented with the club's graphic.

=====
In the end, I think SPiN should grab one women's and one men's look. The two below are the best given the  commission and the needs of the people working there, plus they look great together.  That said, I would still love to walk into a venue anywhere and see men wearing a cool, modern kilt. 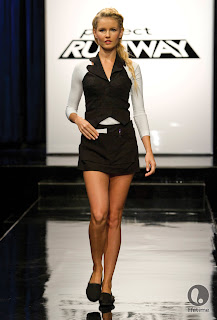 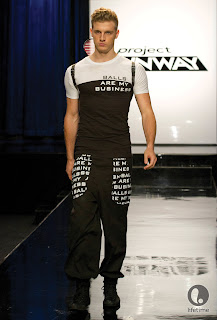