on March 17, 2013
Check out recaps of other episodes by clicking the the Project Runway tab. 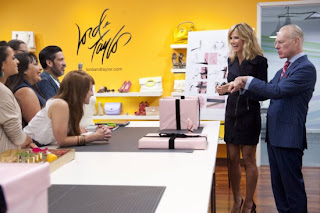 For episode 3 the designers headed into the studio where they were greeted by trays containing natural elements that would inspire a scents as well as small vials of perfume and large pink boxes tied with black ribbon. Tim Gunn then told them they were introduced to their new client - Heidi Klum of course. The challenge this week was to design something to wear for a television ad campaign as well as for a big celebrity launch.

The new fragrance - called SURPRISE - is very feminine and sensual with notes including pink pepper, mandarin and jasmine. Each team had to come up with 6 looks - 4 options for the TV ad campaign and 2 options for her celebrity press event.  Inside the pink boxes were hints at her inspiration and she filled in with verbal instructions. Below is a mix of both - 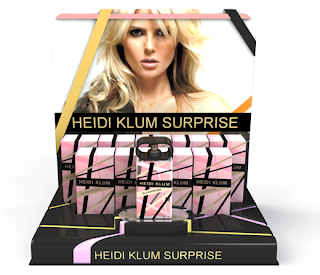 Each team was given 30 minutes to sketch. $1200 to spend at Mood's and one day to complete the challenge. Guest just this week was actress Kristin Davis of Sex and The City who provided thoughtful comments. Most of the designers struggled with fitting issues in this challenge which was interesting to see - one had 20 minutes to take several inches out of the length of the bodice - but most were clean by the time they hit the runway. 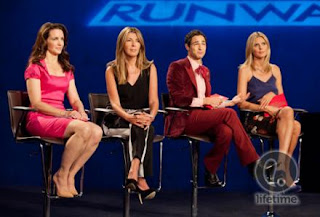 Yes - They won a 3rd week in a row and it was as always well deserved.  I have to admit, though, I am not sure about the other 2 dresses selected.  Top 3 were Kate/Layana with Kate taking the win overall, Daniel also taking a win for the second garment and Patricia.


Kate and Layana paired to come up with a dress that was hands down above all the others in my opinion. Kate was given the win overall and it was again the right choice as Layana was second guessing all decisions. I am really disappointed in the photo as the inset panel under the sheer black fabric is actually a beautiful bright pink reflecting the package colouring.

Daniel's Dress - inspired by a Bond girl -  flowed well and had nice lines, but there was a bubble in the seam on one hip that was poor construction and the beige tone really didn't speak to the ad campaign - it just had no life.  If it has been a blush pink or soft gold it would have fit the challenge better.  That said - Heidi chose to wear it as well.

Patricia's was a beautiful bit of construction and the concept was interesting.  She cut small pieces of hard pink leather and creating a geometric with them that fluttered freely over a soft garment.  Then she added gold graphic applique to the bottom of the skirt as well. I am so impressed with her ideas and skill at creating textile.  The judges were impressed as well. The hard and soft elements were well combined here.  BUT in the long run - I don't see this photographing well either on TV or at a media event which is what the challenge was about so wouldn't have put it top 3.  Nothing to do with design or construction - everything to do with end use.

Other designs in winning team were Amanda/Joseph Aaron, Richard and Stanley.  Amanda/Joseph Aaron had a hard time deciding on a direction, but in the end it came together.  Joseph Aaron created the gold/black segment to mimic black ribbon with gold packaging while Amanda created the dress. It was well received although not chosen. The judges did not like Stanley and Richard's designs and basically said they were lucky they were on the winning team or you would have been in the bottom.

Cindy picked the absolute worst fabric for this challenge, iridescent Shantung silk. When being photographed it would show every wrinkle and dimple.  She was also trying for sexy with the shorter length and plunging neckline but Heidi was quick to point out sexy isn't just skin showing and "..[the dress] doesn't hug the body in beautiful and sexy way." I don't many were surprised she was sent home.

Benjamin is breaking my heart. He really is uber-talented and admitted this week that he has lost confidence recently in all areas of his life and is struggling to pull it together. When he showed his team his sketch and went over his ideas, one announced how much they admired the maturity and skill he brought. Then he totally choked during the construction process and just couldn't deliver. What should have been the winning was a total train wreck - a shock for all - with boobs almost falling out and the dress given shape by leather straps the whole team helped put on backstage.  Hopefully he pulls it together as I would love to see the collection he could produce.

Other designs on the losing team show again show the short site of the team challenge.  Michelle in particular is solid and delivers quality work every week that never gets a chance to be noticed by the judges. Here are the looks produced by Michelle, Samantha and Tu.