September 2010 I had one of those surprise moments. I was scheduled to interview Dan Nguyen, a hair stylist signed by They Representation for my Behind the Scenes series.  Those interviewed were supposed to have 15-20 years experience in the industry. I walked in to find this young, quiet spirit. Tactfully I tried to figure out what had happened. Imagine how floored I was to hear he started in the hair industry at the age of 15. At the age of 40 he had at whopping 25 years of hard work under his belt.

The other surprise was his quiet nature. This is a person running a salon, training others, working on sets and being invited around the world - a internationally respected and highly creative professional. I have been a fan ever since and crossing my fingers one day I'll have the privilege to be a fly on the wall so I can watch him work his magic.

Only 15 years old, Dan Nguyen walked into Suki's Hair Salon and applied for a part-time job. When they wouldn't hire him because of his age, he offered to work for free. In six months his passion for learning and strong work ethic turned this volunteer opportunity into a paid apprenticeship. 25 years later Nguyen is co-owner of Lure Salon as well as a highly respected hair stylist/make-up artist with agency representation. Shy by nature, he has an unassuming air in person; but when working at the salon or on photo shoots, the talented professional within easily steps forward to take charge.

Nguyen has always been drawn to the arts – painting, sculpture and drawing. Hair and make-up intrigued him as well. As a child, every trip to the bathroom was an opportunity to change the look of the doll who resided there. Eventually his mother began asking for help with her hair and make-up. He originally thought about becoming a cosmetic surgeon, but while working at Suki's something changed. “I loved it there. I felt like I was in my element. I was around creative people and it was amazing. It was in the mid-80's with the coolest hair styles - crazy colours, crazy perms and asymmetrical cuts - really edgy.” Most people do a two year apprenticeship, but Nguyen decided to do four – two years for cutting and styling (his focus) and two years for colour. He worked 14 hour days and lived on coffee and 7-11 cinnamon rolls to make ends meet. At Suki's he enjoyed working on a team with common goals, honed his skills with constant training (including courses at Vidal Sassoon's in London), gained experience working on commercial shoots and learnt how to run a business. After ten years it was time to move on, but autonomy came with a price. 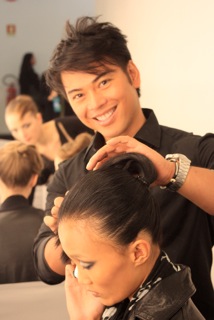 What followed were years working in several different environments, but none felt like the right fit. It was time spent on shoots with other talented artists such as photographer Chris Haylett and make-up artist Gina Hole (now his agent & THEY Representation owner) that kept Nguyen inspired. A desire to be around people who were collectively passionate began to exert itself. “I never intended to open Lure, but I realized I needed to work with a team. I wanted a place with a sense of artistic freedom, coherence and financial freedom. My goal was also to disburse the wealth by helping fellow artists who work for me to have a really good life – financial wealth and knowledge wealth.” Education and mentoring are important to Nguyen, so Lure runs training classes twice a week for all stylists and apprentices. Although the salon is his first priority, he does find time for other artistic endeavours: hair and make-up on professional shoots, work as a creative director and exploring an interest in photography.

Initially commercial work only involved hair styling but over time Nguyen has added make-up artistry to his repertoire. His skills were honed by observing other professionals, practising on friends and family and, in the punk-inspired '80's, on himself. Professional assignments vary. Sometimes there is a discussion ahead of time, sometimes he has to come prepared for anything and everything. Opportunities to step in as creative director evolved along the way. When in this position he is more hands on in the planning stages and has a stronger influence in the final direction. Whatever the role he is to take, he starts with basic information such as the photographer and the publication they are shooting for. Then it's time for research – what is the photographer's style, what is the magazine's style, what is the basic direction and lighting? 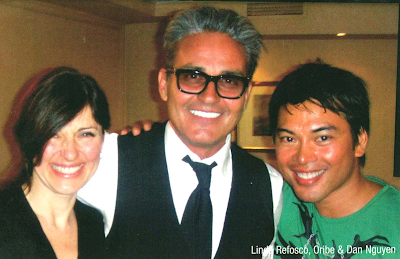 Nguyen is at a point in his career where he feels his work is maturing. “I am more experienced, prepared and knowledgeable and the work has more ease. It's seasoned looking – there's structure and definite thought behind it. I've always admired work that is difficult but effortless and aspired to get to that point. I'm not there yet, but I'm getting there.” He also feels it's a very exciting time to be involved in hair styling as it has come into its own as an art form. “It's more extravagant and technically challenging. It's larger that life, not in size but in approach and technique, and much more advanced.” When asked for advice to pass on to those thinking of this career there are several points. Really listen to both your mentors and your clients. Always keep training. In addition to a passion for the industry you will need perseverance, humility, be able to handle rejection and be prepared to work for very little money at the start. 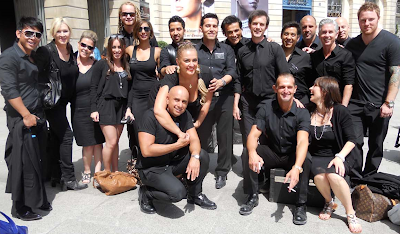 In February Nguyen was invited to work beside one of his “hair heroes,” Oribe, at the Emporio Armani and Giorgio Armani Prêt-à-Porter shows in Milan. July he was asked back to assist Oribe at the Armani Privé Hatue Couture in Paris. The experience was amazing. “This is the pinnacle of my career thus far. I have always have dreamed of working side-by-side with such incredibly talented people on an international stage. I am truly blessed!"